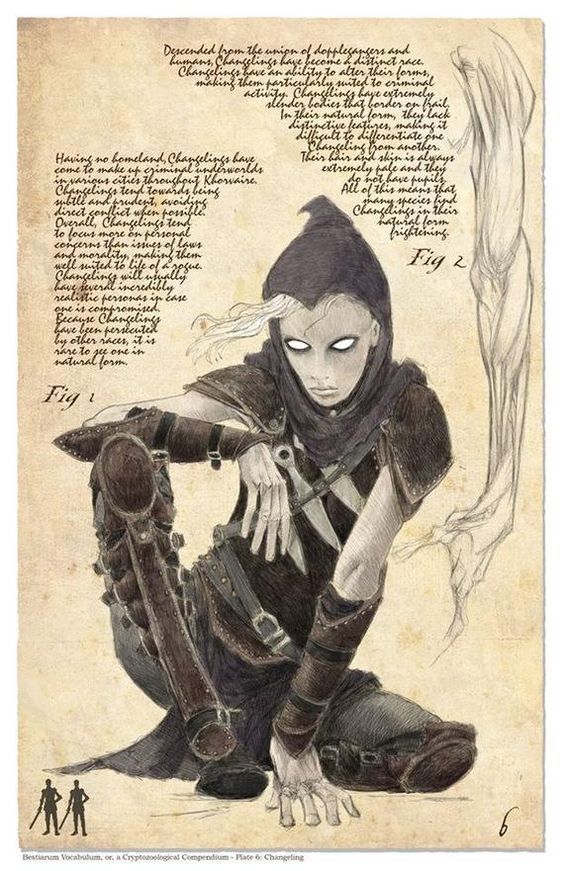 Having no culture and hailing from no city of their own, the Doppelganger descendants known as “Changelings” spend their lives blending in with other humanoid civilizations. Due to their special abilities, Changelings are often not trusted if their true identities are revealed and commonly use their transmutable skills to work as spies or criminals. However, in bigger cities, elite Changelings have been known to form collectives that serve the crown.

The Changeling known as Vokt was young when they started training to become a spy under the tutelage of the Auxiyan Empire’s Master of Espionage at a young age. Like the handful of other Changeling trainees, Vokt was trained in seclusion lest their true identities are revealed. The schedules were grueling and they were scolded and severely punished if their personas for the day broke, forcing them to return to their natural pale, genderless states. As a learning tool, Master Eks taught the trainees to use card decks, particularly Tarot decks, to help organize their personas. Clues as to the personas’ names, appearances, abilities, and personalities could be hidden within the symbolism of the cards and prying eyes would be none the wiser.

It is the aforementioned deck of cards that Vokt clutches as they wake with a start, wretching from the thick smell of blood and burning flesh that clung in the air. Their head is pounding as they behold the devastation that surrounds them. What had happened? Where are they? Why couldn’t they remember?

Maybe the answer is in the cards.