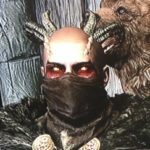 Zauras, bastard spawn, illegitimate blood. His head echoes with the thoughts of his ancestry. The offspring of an unknown Daedric Prince and an unwilling Nord Woman. How can he not be disgusted with himself, who he is, what he is.

Born in Skyrim during the times of the civil war, as the Dragonborn was parading about, a young Nord mother conceived demon-spawn. Cali was a young Nord Widow, her late husband taken from her by the edge of Stormcloak steel. The civil war had left her alone on the farmlands of Solitude, praying to the eight that something gave her life purpose. This was when she began to have visions, waking nightmares of the Daedra. The Unseen one, she called it. It was a Daedric Prince, she could feel the power when it violated her in her dreams. It had no name, no alias, no mortal knew of this beast but Cali. She kept these visions to herself, for fear of her Nord kin and their superstition, knowing fair-well that she would be seen not only as a bad omen, but an outright nuisance. Suffering in silence, she eventually conceived. Though she had been with no man since her Imperial husband met his fate. Zaurus was born, a child between planes. His future had to be great, Cali vowed she would love this child despite the circumstance of his birth. This is his story. My story

Zaurus was product of a birth that was as unpleasant as the rest of his story. It was only because of the steadfast strength shown by a high elf priest, called Ja’cel, that he or his mother lived through the birth. The child had the body of a Nord, a fair skinned human, though the beginning of horns was already visible on the newborn. His eyes were from oblivion itself, a glowing, swirling orange that one could find themselves lost in. As the newborn cried, Cali took him into her arms, her weak body mustering enough strength to pull the child close, looking into his eyes. It looked as though this newborn had seen the all the horrors of the world and more. The knowing in his eyes, the guilt, it was crushing. Cali wept, but they were tears of joy. “My child..my child this is only the beginning of your pain, but you will prevail.” The high elf watched on, his own muscles strained from the energy it took to cast restoration on Cali consistently through the birth. “Cali..what is that..” he said with a hint of hesitance. “My son..Zaurus…” “..and what of his father?” Ja’cel continued. She looked up, almost looking through him. “He has none. H..he’s Nord, do well to remember that.”

Zaurus was no coward, but he knew by the time he could form memories that he was no Nord. That terrified him. He grew no hair, and on his bald head, a row of horns. His childhood was tough, all he knew was the love that his mother had for him, it was undying, his kin shunned him, just shy of running him out of the place he was born. The only reason he continued to live near solitude into his adulthood was his mother and his friendship with the priest Ja’cel. It was him who first taught Zaurus of the Daedra, Oblivion, Magic, and all the horrors of the world. Cali was not shy about telling Zaurus where he came from, and learning when he was young left a deep imprint. He was motivated, if not obsessed with becoming an adventurer or a soldier, doing everything he can to prove to the man-folk around him that he was here to help. He wasn’t as different as he looked. He spent most of his free time training with a blade and collecting weaponry, to the point that his bedroom looked like a small armory. Despite never even visiting the college of winterhold, he was a naturally talented illusionist and pyromancer, though his innate magic hailed from oblivion, and seemed to spike with his emotions. Instead of learning and forming spells, he simply harnessed magical energy with willpower, this lead to capabilities of magical control that was only rivaled by upper class wizards in his adulthood. This is when an event took place that shifted the fabric of reality. One night, working on the field with his mother, he vanished into a column of darkness. As Cali stated at the spot where her son once stood, the crops dying everywhere the darkness touched, she got down on a knee and prayed once more. This time to all nine divines.

Zaurus awoke, head pounding. He didn’t know where he was, or even who he was for a moment. The knowledge rushing through his head was physically painful. He was curled up, screaming and clawing at himself on damp grass in the night. After what seemed like hours, he suddenly understood. On his back was an elder scroll, tightened around him with a strap. He had been flung through the planes, through oblivion, through Hermaus Mora’s realm of Apocrypha. Through Nirn, Through Earth. Now he was hear, Hellafyno. He shakily got to his feet, slowly looking into the sky as he whispered “nine be with you mother. I will return.”

He is a typical Nord for the most part, his skin is fair, hands strong from labor, yet they remain soft. He can’t grow hair anywhere. On the top of his head are horns, growing from his crown down to his brow where it ends. His eyes are orange with a swirling dark center, looking much like an Oblivion portal. His accent is not Nordic, instead it is hard to place, his voice is low and soft, he speaks like a still lake with a comforting calmness that betrays his looks. When traveling he wears a black cloak with light hide armor underneath. His longsword stays as his side and his bow and quiver stay at his back. He doesn’t wear anything on his head because his horns get in his way, though he has a black face mask that he pulls over his nose in harsh weather

The lines of good and evil are not determined at birth. Fate is never set in stone.