In 2110, humanity became ushered into a new light by two of the worlds greatest cybernetic inventors; Cyrus and Madeline Locke. The Locke’s were the key minds behind Locke and Key; an organisation that helped launch humanity forward into the dawn of the great Cybernetic Age. An age where man and machine merged together and pushed humanity to the top of the food chain and solidified their position as the apex predator of said chain. Cars, television, phones, methods of transport, medicine, surgery, weapons and near enough anything and everything in between became enveloped under the blanket of cybernetic enhancements.

War veterans could have limbs again thanks to cybernetic augmentations. Cancer patients could be cured by an injection of specifically programmed nanites that would target the cancer cells within their bodies. People could create themselves a paradise without leaving their homes thanks to virtual reality. The military could send in piloted drones into wars and risk nothing more than a handful of scratched robots over losing masses of human soldiers. The police could risk assess possible criminals and prevent a crime from happening before it even happened.

The dying could have their mental state uploaded into a cloud server and live in an eternal state of bliss in virtual reality. It was an age of new possibilities, an age that was the next stage in evolution and advancement for humanity.

Where many saw advancement, others saw exploitation and broken morals. The rich one percent augmenting themselves in ways that the lower classes could hardly believe. Limbs being swapped out for the latest cybernetics to keep up with a trend amongst the one percent. Organs being replaced to  allow them to live longer, to allow them to be stronger. If excessive drinking brought liver failure? Then that liver would be cut out and simply replaced with a bio-synthetic liver that would be incapable of failing.

In the eyes of some, the rich and famous were playing above the level of God while the lower classes suffered from sicknesses, poverty and faulty cybernetics.

Compared to the one percent, the lower classes struggled to even gain the needed cybernetics. Where the one percent were replacing themselves out like cars, the lower class were struggling to get just one cybernetic limb to recover from an injury at work that or their bodies were rejecting the augmentations and poisoning them from the inside out. If a worker lost his arm in an accident then the hospitals would look to their medical insurance and provide them with an augmentation that fit.

So for some? They would get a late gen model of cybernetic, one that would last maybe a year or two at best before it would begin to fail and shut down while the nanties that had once fused man and machine together slowly began to shutdown and poison the person from the inside out either forcing them to go without a limb and get it removed or live with the terminal and incurable illness known as Nano Degradation.

At first, Nano Degradation was nothing more than a handful of isolated cases around the world. Someone died here, someone’s arm poisoned them there. Each case was either brushed aside by the towering government or labelled as nothing more than the body denying the cybernetics in an attempt to keep sales on the rise and to keep panic from spreading amongst citizens. It wasn’t until heavier numbers in regards to nano degradation began to show up all around the globe that the governing force, the Bureau of Pubic Welfare and Safety (BPWS), decided to create a system that could analyse, monitor then either treat or simply dispose of those affected by Nano Degradation.

The call was made by the use of a simple and subtle ‘synaptic scan’  which monitored a person’s brainwaves and psyche before running a risk assessment. If the risk assessment registered a victim of nano degradation above a certain number, if it sat at an unstable level, then the person monitored would be disposed of to prevent panic and rioting or just general chaos within the streets. If a person’s scan sat a stable level, then the system would allow them to receive treatment.

It was a subtle way of controlling the world populace; starting with medical treatment before advancing onto home insurance, taxes, getting a job, where they could live. It was a dictator program; a wolf that was slowly herding sheep into two separate pens: to remove those that were seen dangerous and allow the peaceful to prosper under the blanket of peace that the system was providing.

For a while the system went unnamed or the BPWS referred to it as ‘Shepherd’ but after a leak within the BPWS, when people found out about ‘Shepherd’ and how it was playing puppet master, people soon chose their own name: Carnivore; the A.I that took the title of apex predator from humanity. There was no joy when the public learnt about the Carnivore A.I. For a good year there were riots, witch hunts against augmented and non-augmented people alike, protests and a general bout of chaos.The system sat on the verge of collapse as the BPWS and the police struggled to cope with the constant chaos. Even with the drones, weapons, gear and augmented units, the BPWS and the police found themselves on the verge of buckling under the pressure but there was one thing that held them up and kept them going; the Locke’s and a very simple idea.

Instead of throwing the Carnivore A.I to the side, the Locke’s decided to openly push the A.I forward and made it known to the public that the A.I was to be integrated into to society on every level. Traffic cameras, cars, security firms, phones, computers, security cameras, the A.I was integrated into anything and everything electronic, calming the populace and allowing people to integrate with comfort whilst providing a secure network in which the BPWS, Locke and Key and the police could monitor on a daily basis. 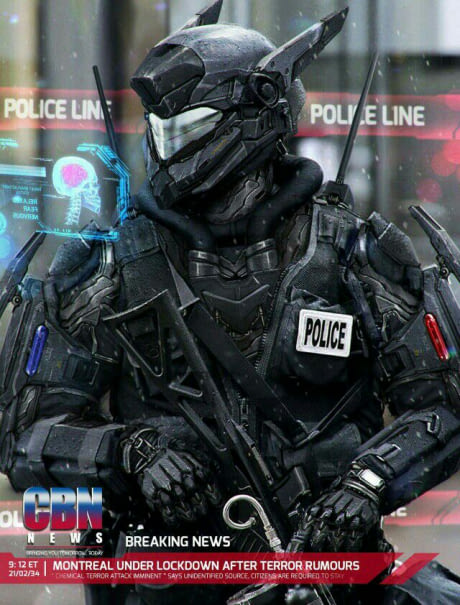 It was seemingly a foolproof plan; people had a system that they could trust and the BPWS had a network that put them on a level of near omnipotence. It helped society for a while. People were comfortable and many integrated the Carnivore Network into their lives but cracks did begin to show. Many people felt uncomfortable with an all seeing eye in their homes and began to rid themselves of the Carnivore A.I, opting for a simplistic Virtual Intelligence that they could order around instead of the roles being flipped. It created a divide. It created unrest and it created targets.

It created a whole new wave of crime.