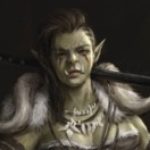 "I dont see how that is any of your concern."

Ul’Malarg is a grey orc and stands at 5’8″, a couple inches taller than average for half orc females (yes, she is a half orc, the race of the half is presumably elven, but it is currently unknown), her ears are fairly pointed with saber tooth gauges through the bottoms of them. She has a long, jet black mohawk that swoops down to the right side if her head, though it can often be seen spiked up. Ul’ has honey colored eyes, a black tongue, and relatively small tucks.

Two large beastly skulls act as her shoulder armour, the roof of their mouths padded with fur to keep bone from resting directly on her skin and let her straps that hold them firmly to her person. Across her chest she wears a metal breastplate padded with fur and leather, the straps intertwined with the straps for her shoulder skulls. Her arms are mostly bare, displaying strong biceps before her wrist guards. Her abdomen is bare, displaying a strong washboard stomach down to her heavy chain belt which displays a glowing blue gemstone on the forehead of a more humanoid skull with saber teeth. This belt holds up an almost knee length skirt made of furs, leather, and chainmail. The rest of her legs wrapped in thick rope that lead to large, heavy boots.

Void Battle Axe – A large battle axe crafted of metal and bone, a display of brute force. This weapon weighs nothing to Ul’, allowing her to swing it effortlessly as if it were made of air, though it is just as brutal as being struck with an ordinary battle axe. While this axe weighs nothing to Ul’ it is ultimately impossible for another to lift it, beyond her grasp it is as if the weight of the world was put into the one object. This is her primary weapon and it is never far from her, be it at her side, in her hand, or strapped to her back.

"You are asking far too many questions."