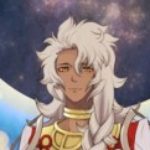 Aurelian was a halfling Born from a human father and a mother born from the Shahari. Aurelian was orphaned at a young age his mother dying during the great island war his father fleeing the country to escape the 2million gold debt he inquired leaving it for his son to pay.to pay the absorbent amount of  debt at age 11 Aurelian was forced to join the Eldarian forces  and excelled during his first two years of service with a kill count hundreds with his miraculous speed, power, and accuracy with his dual wield blades . earning the title The white wolf. climbing the ranks to lieutenant within his five years of service, but disaster struck when a surprise attack on the Eldarian capital was committed Eldarian force was victorious but Aurelian suffered a critical injury  due to the fire in the ensuing chaos his right arm was burnt to the shoulder down, leaving the warrior bedridden for months, but when he recovered his arm did not appear human anymore his veins seemed to illuminate a crystalized magenta and white luminous  hieroglyphics run down his shoulder down to his upper forearm and his hand seemed to have a mark on both sides of his hand. Aurelian felt an ungodly surge of power omit from his appendage. frightened from his discovery he covered his arm in bandages and prepared to continue his service in the eldarian forces, but when he first entered the first battle of his return it spelled the beginning of his legend outnumbered 1000 to 1 eldarian prepared to admit to defeat to the powerful Galvric empire but with all the strength in his bandaged arm he swung his battered blade release a powerful gust of wind that cut through half of the Galvric army causing them to surrender in fear. Aurelian continued his service and military conquest defeating every army within the islands of Inotia earning promotion to General before his final year of service at age 25. after retiring with the immense fortune his gain for his contributions in the multiple Inotia wars he decided to travel the lands beyond the Inotia islands to learn about other cultures and to live his life as a man not as a soldier.

Aurelian his an extremely tall, lean ,defined tan-skinned male with scars covering his chest and back, and his left arm and his right arm would be covered in a white bandage that seemed to completely conceal it .he is depicted to have a feminine appearance with soft cheeks and lips long curly that fell to his upper back, and yellow hues with a red outline outline around his cornea and a dark red ring around his eyes.

his attire is mostly depicted a white frock with burnt sienna stitching and a white fur collar white slacks with white boots with burnt sienna Stichting, and two straight swords strapped to each of his hips. the left sword was held within a white sheath with a black hilt. the right inversed the other weapon with a  black sheath and white hilt.

jade ring- worth about 200 gold

Salvation-His right Sword known for its azure blade and light it is known to be his quickest a most used blade able to slice through enemies with extreme swiftness and precision leading most to a painless clean death for those who Aurelian pure of heart on the battlefield.

Damnation- His left sword known for its crimson blade and heavyweight and powerful presence only those with extreme strength levels of strength can wield this with one effectively. It is known for its brutal deaths causing those who face it to fill extreme pain before there eventual demise to contrast its sister blade. This blade is only used on those who are deemed true evil hence its name.

Is a half breed of a a group of demi-humans known as The Shavari which are a group of women who are given the Physical essence of the inotian wolf god Ivros the god known to destroy whole mountains with his claw and race the stars, but the Shavari can only activate their power by going through immense suffering causing many of the Shavari to never unlock their true state. Aurelian notable features are yellow eyes normally when awakened a then gain a red ring around their pupil and a dark red ring around their eyes, and notably, since they are an all-female clan most appear to be very fare women which explain Aurelian’s extremely pretty appearance,and miraculous speed and strength,and mutation to his right arm.