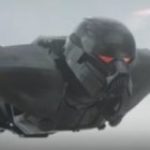 active 1 month, 1 week ago
Base

The Dark Troopers were advanced battle droids and infantry exoskeletons that featured heavy plating that resembled the armor of a stormtrooper, powerful weapons, and jump packs for increased flexibility and tactical advantage.[1]

Besides the Phase Zero prototypes, they came in three versions: the Phase I dark trooper was a skeletal droid armed simply with a vibroblade and physical shield, primarily a testbed for the later stages; the Phase II dark trooper, which featured, in addition, the external elements; and the Phase III dark trooper, which was the main unit and was never fully developed. Only three Phase III prototypes were on board Arc Hammer. One of these was used by the originator of the project, General Rom Mohc. It was a more powerful variant of the Phase II model and was able to be worn as a battle exosuit The first iteration of the project came years before the Battle of Yavin. Stationed aboard the Empirical research station and using most of the same technology that had been used to transform Anakin Skywalker into Darth Vader, the Empire started building clone trooper veterans into gruesome cyborgs, the so-called Phase Zero dark troopers. As the Empire started to become less dependent on its clone troopers, the Phase Zero project declined and was eventually shut down, but the efficiency of the cybernetic soldiers had become apparent to most, including the man overseeing the space station: a young Imperial officer called Rom Mohc.[3] The Phase Zero troopers were deployed on battlefields shortly before the Battle of Yavin.[4]

Years later, the Dark Trooper Project was finally greenlit. The main goal for the Dark Trooper Project was to create the next generation of the stormtrooper. It consisted of the armor and the application of weaponry so it was intended for use with the basic stormtrooper (clone and the like) but looking forward to whatever internal system that might be developed. The dark troopers were first used against the Rebel Tak Base in the attack on Tak Base, in retaliation for the destruction of the first Death Star. They slaughtered all the Rebels in the base. Concerned about the potential threat of the dark troopers, Mon Mothma tasked Kyle Katarn with the program’s destruction.[2]

Squads of the dark troopers were characteristically deployed alongside the standard Imperial stormtroopers and the Imperial Army regulars in battles to add their distinctive advantage. They used their advanced combat techniques and jetpacks to drop behind enemy lines or outflank enemy positions, contributing to the overall effectiveness of battle maneuvers by creating havoc amongst their foes.

They were equipped with specialized assault cannons, which were modifications on the Imperial repeaters, rather than the standard E-11 blaster rifle; they were also issued additional fragmentation grenades, thermal detonators, and concussion grenades. Dark troopers wore dark gray armor made of the nearly indestructible metal phrik, mined on the moon Gromas 16. In addition to providing superior protection against enemy fire including energy weapons such as lightsabers, the armor was equipped with acceleration compensators to allow a soldier inside to endure the extreme maneuvers the unit was designed to perform.

Phase Zero dark troopers were usually equipped with a blast cannon or ARC caster as their primary weapon and a commando pistol or a SE-14r light repeating blaster as a side arm. They also carried a supply of thermal detonators.

Elite dark troopers, were armed with blaster cannons, SE-14c pistols, alongside a variety of grenades, such as fragmentation grenades, thermal detonators, and concussion grenades

Note they will sometimes just slaughter anyone who they hate