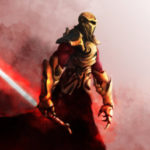 A Bounty Hunter, A General, A Sith Lord, An Emperor, Killed and Reborn…. I am Eternal.

Weever’s story starts centuries ago, on the planet of Korriban. Much was expected of him, he was a Pureblooded Sith, as were both his parents trailing back many generations. His parents were also Lords meaning that his eventual becoming of a Lord was seen as simply, the way of things. His training was hard for this reason, harder than most Sith, he had a thousand generations of honour to adhere to.  Those that are born within the empire from a force-sensitive family start their training very early in life, making them refined weapons by the time they are teenagers. Weever was no exception.

He was a Sith through and through, he had full control of his rage and anger, using them to fuel both his force abilities and his combative skills with a lightsaber. While no one would have openly said as much, many a Lord were waiting for him to pass his trials to take him on as their apprentice, a Darth or two also had their eyes on him. But he did not wish to be Sith, oh no. Yes it made him powerful, yes he was becoming stronger by the day but he would not be a slave.

He was about eighteen when something finally snapped in him. He had waiting until nightfall before leaving his bunk and sneaking out through the temple. His first stop was that of his overseer, the man who had caused so much pain and anger throughout his childhood. The overseer didn’t stand a chance, he was torn apart in mere moments. Fuelled by this blood lust he continued, killing acolytes and imperials who had caused him trouble before finally making his way to the landing pad. Stealing a shuttle, he left Korriban and vanished without a trace.

The shuttle could of course be traced and so he needed to drop off of the radar. Hutta was his destination. Not as developed as Nar Shadaa but just as easy to disappear. He crashed the shuttle and fled, he stole enough clothing to cover his red skin as Purebloods were not common at all outside of the Sith Empire. He took odd jobs as a bounty hunter, racketeering, threatening, assassinating and so on, not using his force abilities so he could not be traced.

With what little money he earned, he upgraded his equipment and armour. The lifestyle of a free hunter suited him, he worked solely for himself. This would not last however, and three years after he started, he was located. No, it was not the empire that cared so much for a singular Sith Acolyte, no matter his potential. In fact, it was his parents who came with a simple objective. He would return to the Sith and restore their honour, or destroy John so he could no longer disparage their name.

John did not return to the Sith. At this point in time, John was not as strong as two pureblooded Sith Lords. He ran and lured them into the swamps, using all the skills he’d learned as a Sith as well as those he’d picked up on Hutta. A week past before he finally killed his father, by far the weaker of the two. A single plasma round to the stomach was all it took, his barriers had failed through exhaustion, he was basically human. His mother took longer. Three weeks in total before she was killed, the sad part was that it wasn’t even him who did it. A local cartel leader had heard of the force sensitive bounty hunter and wanted him. They sent a group of Mandalorians and unfortunately, fifteen mandalorians against one exhausted Sith Lord is really no match.

Weever was the last of his family. He was recruited into a Hutt Cartel, somewhere he would stay for many years, operating singularly as one of their finest agents. The money he earned granted him the best armour and weaponry available. He was given a ship so that he could traverse the galaxy and complete larger objectives. This was where he saw issue. He had become a slave to the Hutts and this was not acceptable. Over time he gained the loyalty of several bounty hunters who all, when the time was right, abandoned the cartel together and fled to the Unknown Regions.

Leadership disputes mean that the entirety of the crew had to be removed, Weever was his own agent of destruction once again. Hearing of his talents, an empire known as the Destiny Empire hired him to work for them. They were not his master, they simply paid him to complete contracts. Being a super-advanced species from a different dimension entirely, their motives were questionable. It seemed they had an innate hate for human-kind and seemingly, when they did not have an objective for him, would send him to cull a colony that got too close for their enjoyment.

That was when the Sith returned. They rose to prominence once again and declared war on the Republic the Destiny Empire had constructed. Weever became somewhat of a general for the Destiny empire, leading huge campaigns against the Sith. With his tactical brilliance and their superior technology, the Sith didn’t stand a chance. Worlds were glassed and millions were murdered, he was awarded many medals for his unwavering leadership and resolve. That was when he realised something. His ability to lead was always unquestioned, his tactics often superior to those he worked alongside.

Months later the war was over, a deal was struck that demanded the Sith remain on Korriban and Dromund Kaas. The Destiny Empire had stretched it’s resources rather thinly across the galaxy in order to ensure that this condition was met and so the perfect time to strike had arisen. Using the commands and privileges awarded to him for his service, he made his was onto the bridge of their newest dreadnought cruiser. Super-advanced by their standards, the ship held a Bio-mechanical conduit which allowed an organic being to ‘connect’ with the vessel and man it like an AI. Weever did this and was able to command the vessel singularly. It took it’s toll, the vessel was miles long to account for the vastly large Lightless that would operate it.

He managed to flee the Destiny space and disable the tracker. He did not make it far before the connection became too much and he had to leave the vessel. His options were limited now. He could not run forever with this ship, he would surely die through exhaustion. He turned to the force, with whatever strength he could muster he felt through the surrounding space for somewhere he could go to recuperate. The force responded.

The world of Tigurín, completely removed from all databanks and seemingly non-existent to those who knew not it’s location. A place of villainy and scum, the hideout for several crime syndicates. With a vessel of this size and power it was an easy task to force the planet’s cooperation. He implemented himself as the plants ruler and through years of meticulous planning and continuous exploitation of local systems, they constructed Weever Industries. The planet grew from a simply colony to thousands of industrial cities and stations. Make no mistake, they were all bounty hunters, but they obeyed Weever because betraying him was far worse than what they had to deal with. He continued his training and his working during this time, his powers growing day by day, year by year.

They found him. The Destiny Empire had tracked him down and sent a human agent to destroy him. A space battle ensued. The human was easily destroyed in his small corvette,though a lesson was learned this day. The Destiny would not forget his treachery. A grand reformation occurred. Weever Industries continued to exist, however it’s sole purpose was the fuel the war machine that was the new Imperial Empire. Taking on the many traditions of the Sith, he created an empire purely in his image.

It was not long after it’s creation that the Empress of the old Sith Empire caught wind and tried to destroy Weever, however many of her Sith betrayed her, joining Weever as they believed her to be weak. In a swift victory, the Empress was executed, Korriban and Dromund Kaas were taken under Weevers control and so was born the New Sith Empire. His first action as Emperor of the Sith was the war of the pathetic Nation of Britannia. They burned their worlds, system by system, taking them under his wing and using them to expand their might.

The Destiny saw this obvious breach of their treaty and declared war, but by this point it was far too late. Countless battles ensued and while the Destiny held a huge technological advantage, Weever and his carefully selected council produced tactics far beyond theirs. Eventually, after countless victories, an armistice was struck. A zone was demilitarised and the fighting ended.

The Sith continuall prepared for the day they would return and destroy the Destiny however. Although it was not them. A new entity appeared and obliterated this dimensions Destiny Empire, their allies abandoned them and they were simply no more. The Sith were not phased. Their expansion was now unrivalled.

However treachery would rise. Drugged, outnumbered and unprepared the great Emperor was murdered by the woman who would take his place. Weever, through his rage and anger became a force ghost, clinging to life through a holocron which was taken by one of his followers in secrecy.

In time, those still loyal to Weever prepared all the necessary artefacts required for his return. He entered the mortal realm through the use of possession. His resolve had never been stronger.