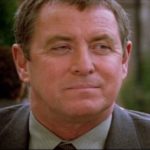 Tom is in the town of Causton in the southeast of England. From that base of operations, Barnaby travels out into the English countryside to solve murders as they occur in a variety of small villages. A genius in the field of criminal investigation, he is a highly experienced and methodical detective; prone to taking his time. However, despite his slow and steady nature, he is an extremely perceptive and sagacious individual, detecting even the smallest of clues, which ultimately aid him in solving the gruesome and barbarous crimes which are committed in the county of Midsomer. It is worthy of note that in many cases, he has already reached a conclusion as to the identity of the murderer; only to reveal this fact later on after he has accumulated enough evidence. Barnaby had been happily married to Joyce for many years until things went wrong. The two had an adult daughter named Cully, until she was murdered. They had lived and worked in London at one point, as around the time of their wedding Barnaby was trying to solve the case of the ‘Pimlico Poisoner’.

PERSONALITY AND APPEARANCE:
Detective Chief Inspector Tom Barnaby is a kind, honest and hardworking middle-aged policeman who often stands out from his fellow detectives, in that he is very ordinary and does not use violence to interrogate his suspects. Another thing which made him stand out is that he is also a family man, having been married to Joyce and having a daughter Cully, whom he got on well with – which is also a rarity. But, as time went by, Tom and Joyce’s marriage became strained as he was spending more time on cases than with her. And, losing their daughter caused problems as well between them. Having had enough, she separated from him and, not long after, they went through a bitter divorce. This caused him to go down a deep, dark spiral, suffering from alcohol, depression, smoking, and gambling – as well as going through a series of love interests, none of them lasting. Tom Barnaby, as a policeman, still takes his time when it comes to solving a murder. Barnaby often wears smart three-piece suits and ties. He has blue eyes, and stands around 5′ 10″. He is dedicated to his job and his daughter, and she supports him at every turn.

CAREER DETAILS:
Thomas Geoffrey Barnaby’s life in public service began after his graduation from Police College when he was recruited by MI-6. The length of his service with MI-6 is unknown, however by the mid-1980s Barnaby had left MI-6 and joined the police force. DCI Barnaby and his best friend Jack Colby joined the police force on the same day; eventually both rose to the rank of Sergeant with Colby remaining a uniformed sergeant, and Barnaby transferring to CID. Newly arrived in CID Detective Sergeant Barnaby was placed under the supervision of Detective Inspector Owen Jenkins. DI Jenkins and DS Barnaby investigated the disappearance of Ginger Foxton one of the members of a jazz band known as Hired Gun which was solved some thirty years later. Sometime between 2001 and 2007 Tom Barnaby now a DCI was transferred to Causton CID in Midsomer County.

As a DCI one of Barnaby’s duties is to train and guide the development of the Detective Sergeants who assist him, and act as his partner. DCI Barnaby has had three partners. The first of his partners is Detective Sergeant Gavin Troy, who serves alongside Barnaby until he is promoted to Detective Inspector, after which he is transferred to a new post. Troy is then replaced by Detective Sergeant Daniel Scott who comes to Causton CID after being reassigned from the Metropolitan Police to the Midsomer Constabulary. The reasons for Dan Scott’s reassignment to Midsomer and his abrupt departure have never been explained. Scott’s absence requires DCI Barnaby to make a brevet appointment, he appoints PC Ben Jones as Acting Detective Constable. The appointment becomes permanent when Jones is transferred into CID. Subsequently, Jones earns his promotion to Detective Sergeant.

One case stands out more than any other for Tom, and that was when his very own daughter, Cully, was murdered. She was found horribly disfigured, nude and raped. And, it was Tom called to the scene of the crime, not yet realizing it was Cully until he looked upon her face and recognized her.
It destroyed a piece of him that night, never again would he be his old self. The murderer is currently still at large, and Tom feels he might just end up going mad trying to solve it.
Working so hard on the case to do everything he can to solve it, his marriage suffered greatly. Joyce needed emotional support, and Tom was just not there for her in her time of need. Tom handled the loss of their child vastly different, putting his grief into his work, trying to figure out the killer and bring them to justice. Because of this, Tom’s wife could no longer be with him to ‘watch him destroy himself’.
Feeling she was soon to have a nervous breakdown, Joyce left her husband to stay with her sister indefinitely. Half-hearted attempts to win her back failed until both gave up, and they were soon divorced.