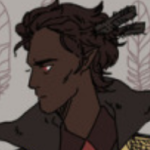 “I was given a pretty difficult choice when I was faced with the career of being a bounty hunter for the goddess of death. I didn’t grow up wanting to be that, of course.

… I wanted to be an orchestral conductor. But unfortunately, you know, life finds a way… or death, I guess, the goddess of death.”

A servant of the Raven Queen.

Kravitz, when he was a younger man, aspired to be a talented person. He came from a decently wealthy family and a large one too– the only brother among three sisters. He lived a well rounded life, filled with both good and bad things, though never too much of both. They lived in Neverwinter, one of the largest cities in the Realm.

At the age of 25, Kravitz was caught in the crossfire of a dark elf trying to rob a bank, and was struck with a killing spell. Though, instead of passing on into the Astral Plane, he was stopped. A figure, half raven and half human, stopped his descent. She had a prospect for him, and a choice he could make.

After his run in with the Raven Queen, this realm’s ruler of the underworld, he was contracted to work as a bounty hunter of sorts — tracking down and rounding up souls that didn’t check into the Astral Plane. From there he reforms them in the Eternal Stockade; a misty place filled with tiny ghost-like souls. They remain there until they have accepted their passing and can move on to the next stage of death, either damnation or reincarnation.

He doesn’t mind his job, but he certainly doesn’t love it. Being surrounded by death or by people who wish to avoid death has worn on him a little, to some he may even appear jaded at those who live freely. Still, he is often rather sarcastic and aloof upon first meeting, yet underneath the surface is a much more tender man.

As he is in contact with death so much, he cannot die, but he can still experience physical pain in his more human-like form. When frustrated, his hair can catch fire, but he can put it out with a swipe of his hand.

He speaks in a Cockney accent when working, but otherwise his voice is more akin to a low register of the American Midwest.

He has two known forms. His first form takes that of a strikingly handsome dark haired man wearing a fancy suit that is covered by a long, black, flowing cowled robe.

His second known form sheds the human aspect and becomes skeletal with glowing red eyes and a scythe.

– A small compact mirror to contact the Raven Queen

– A large assortment of pens

Kravitz is more a grim reaper than just a bounty hunter. While he cannot wish death upon others, he collects the souls and puts them on his proverbial ferry to the other side. He also has some shadow manipulation powers, as well as the ability to float.

That death is the high price of living.