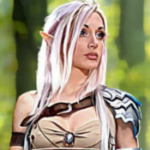 born to the Sylvan Elf King Keth Naladris and his beautiful Human wife Miriam,she was the sole survivor of a raid on her father’s village by Orcs…although raised lovingly by her human relatives,they knew nothing of raising an Elf child,and she endured years of taunting by the other children…after outliving all the relatives she cared about she left the village exploring the world til finally she came upon Fey Woods

Taken in by the wise Dragon Crohn Dragon hope,she finally learned how to be an Elf,and under the sharp eyes of Eve Walks she was trained into a highly skilled Elf Ranger,charged with protecting Sylvan Forest by the legendary Cleric Sel-vin-yr before travelling to the next plane of existence..do not let her beauty fool you,she has the abilities of warding an area,summoning animals and natural forces to do her bidding and knows the True Name of every Element and she can summon any and all of them at will,and wields the longbow and crossbow with deadly accuracy and once led the crew of her husbands(Gen. Deaths_End4U)ship to victory against a horde of goblin pirates

Married to and owned by Galvin Knight(Gen. Deaths_End4U)theirs is an unbreakable bond of Love,and she is completely and utterly devoted to him and would fight beside and die for him without a second thought