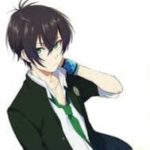 I can be a little sarcastic and a little dumb sometimes but a true softy at heart but a life of abuse and neglect and later experiment 13 the experiment to create a weapon to end all wars left a sour taste in my mouth makeing me very hostile and very unstable in sertan situations and towards sertan people .

I've never really thought about it

Up until i was about 3 years old i had a pretty normal childhood excluding the fact my peronts only had me to bring them closer but i wasnt enough to fix a broken marrage they didnt pay much attention to me so i became as independent as i could at tha age. One day i overheard my mother on the phone talking about having another child and tha it was going to be a girl this time. when i found out i was going to have a little sister i was extatic i couldnt wait to have a sibling. But it was all to good to be true as she died before she could evan be born. My peronts gave up at that point, my mother started to drink each year getting worse and worse so i had to look after her most nights bc she was to drunk to look after herself my father spent most of his time at work so i didnt see him much but when i did he took out his anger on me and over the years i had my fair share of broken bones and cuts. As i got older i needed excuses to get away from my family more and more so most of my highschool life if not all of it was spent slacking off going to partys and seshes takeing more and more drugs i think i only did it in hopes that it might kill me. Over the last few weeks ive knowtised a group of people only a small group of 3 tha just show up dont talk or do anything actually they just watch us… the last party i was invited to was odd it was been held in the basment of a old farm house just out of town i walked up to the building there was no people no music i hoped i got the wrong place so i turned arould and they were there… thats the last thing i remember before waking up straped to a medical table with needles and tubes stuck in me.

.I alwase have my mask it suppresses my power and makes it more manageable
.a hunting knife i found in a deer carcass when i escaped the testing lab
.a handgun i aquired from one of the men sent to bring me back

Control and manipulation over time:

This is the only power I have, it was given to me as i was used as a lab rat in underworld experiments in the efforts to create a super weapon. It seems simple at first but can stem into many different things depending how creative I can be it is infact a very versatile ability

I can also speed up my learning progression so I can master for example, languages, fighting styles or anything tha requires years and years of practice I can master in a few minutes

I can reverse the blood flow around peoples bodys to immediately imobilise and kill my enemies
– this can also be used to stop blood flow in sertan areas to stop them working e.g. legs and arms