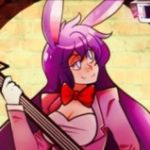 “time to face the consequences of your actions”

Bonnie is very bouncy, happy and curious goofball. She is one of the smartest and wisest animatronics in the crew, and it shows with her theorizing, or doing smart stuff with computers, electronics, or science. It’s easy to say that Bonnie is the brains of the crew. But she is still a huge goofball with him calling her friends “Bunny Buddies”, playing around, or being very passionate about her interests. She also loves any food or treat that has carrots in it. But most importantly, Bonnie loves playing her guitar, she would spend hours writing her own songs, and sharing the joys of playing guitar to her friends. But this bunny has some flaws, with her biggest ones being her very stubborn attitude and a phobia of changes. Bonnie absolutely hates it when things change and she wants everything to stay the same, since it makes her feel comfortable and safe. And when Bonnie gets angry, she can take off his face(which can fall off randomly), which will give her much more menacing look. But despite these flaws, Bonnie is always ready to learn something new from the world around her. And if she gives some ideas, and they are approved, she will feel really happy and proud of himself. Bonnie’s job is to play guitar in Fazbear’s Band The Freddy Fazbear’s Pizza Theme Song reveals her to have the demeanor of a stereotypical rock musician; boastful, prideful, with the speech pattern of a laid back hippie stereotype.

Bonnie is by far the most active, being usually the first one to leave the stage, but also the least dangerous of the original five animatronics. If he waits outside the door, it isn’t for very long, although even if he is far from the office, he can travel there surprisingly quickly. Shutting the door on him wears him out quickly into leaving, as opposed to the persistent Chica. 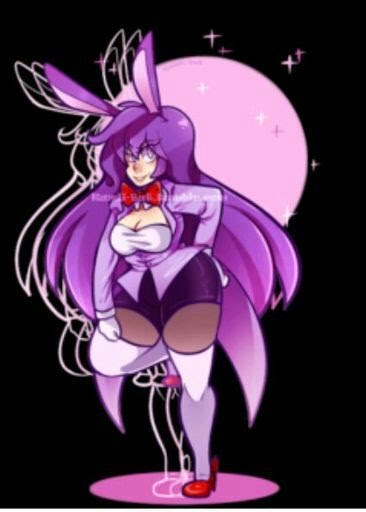 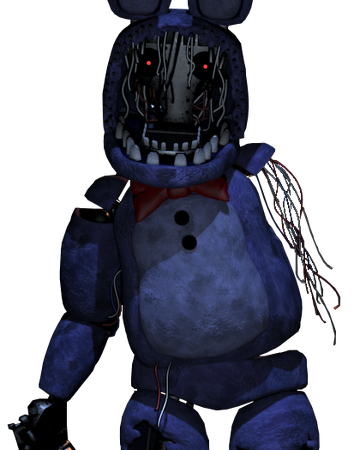 Like Withered Freddy, Withered Bonnie also has two buttons on his chest. His face has been gutted, with most of it being removed, revealing his endoskeleton mechanisms and dangling wires. His lower jaw remains, featuring more teeth than the original Bonnie possessed in the first game, although the jaw itself still appears to be functional as seen in his jumpscare from Help Wanted. His eyeballs are gone, exposing glowing red irises. His left arm is missing entirely, baring a tiny strip on the topmost section, with a mass of torn wires in its place. The red layering of his mouth has been removed, making his teeth seem longer than before. Withered Bonnie’s right ear is mostly seen being folded, similar to a stereotypical rabbit.

His suit has become tattered, particularly around the legs, and a few loose wires poke out of his body. The covering on his right hand and left foot have come off, revealing more of his endoskeleton. He also seems to have a bigger stomach, as it looks more rounded and bigger than his upper body. Also, his chin does not squash his bow tie now, and his suit seems to have changed to a darker shade of blue. Like the original Bonnie, Withered Bonnie also wears a red bowtie. Out of all the Withereds, he seems to be the most tattered.

According to Phone Guy on Night 2, Withered Bonnie’s appearance is due to an attempted retrofit of the older animatronics that took place before they got scrapped for the newer models, such as Toy Bonnie. 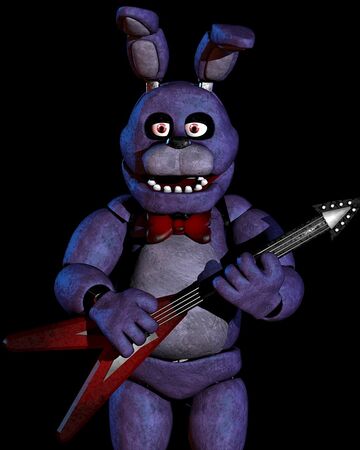 Bonnie is a purple-colored animatronic rabbit with blue blotches, magenta eyes and a squarish muzzle. The color from his muzzle, stomach, and insides of his ears is a grayish color. This could indicate he was blue at one point, but got a paint job of purple under unknown circumstance, hence the blue blotches. He sports articulated ears that are capable of bending backwards and forwards (similar to several other animatronics’ ears) and wears a red bow tie, which is partially obstructed by his chin. Onstage, he carries a dark red guitar. Unlike the other characters, he has round teeth and lacks eyebrows.

Excluding his head, most of Bonnie’s body appears identical to Freddy’s, apart from the latter’s color. This version of Bonnie, like most of the animatronics in the first game (except for Foxy), has no visible teeth on his upper jaw.