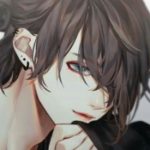 What is Deeje well the answer to that is a hybrid who is Deeje well that answer is the outside. Deeje was never keen on making friends sure he would sweet-talk people into doing what he wanted. But making friends that is something he never tried why well he is always moving from one place to another. The reason he does this is unknown he not always welcomed in every town he visits seeing his high bounty’s. But that is bound to happen when you have to steal and smuggle to make a living. Yes, he is not shy about breaking the law hell even as a young kid he always found a way to incur the wrath of his mother and father. But it has been years since he has seen his parents no but he could care less seeing that the only way for him to survive is by doing what he has done his entire life. Runaway from his problems he does not care if he hurts the feelings of the people around just as long as he gets his next meal. Will, he ever be able to settle down nope there is also the fact that he has the combination of wind and time powers. This has caused a cult to hunt him down on many occasions determine to gain his powers by slaying him. You see it does not matter how many times Deeje strikes the crazed cult members down because every time they are resurrected by their God Muassaran. But that is not the only deity that Deeje has to deal with seeing that for some reason a Goddess named Jabbel is head over heels in love with him due to him constantly undermining Muassaran’s authority. So in a way to protect Deeje Jabbel placed a spell on him allowing him to live forever. But the thing is he can still die only once he dies he is resurrected by the spell placed on him. Now Immortality was fun at first but when Deeje soon found out he would be spending it doing the same things in his life he soon came to hate it. And so he has nursed hate for the Gods and Goddess.ever since then. Hating the fact that he will live forever only to die forever knowing full well that there is not a thing he can do to change that.

Appearance
Skin Color: Pale
Hair Color: Dark brown
Hair Length: Long
Hair Style: In the back, his hair is pulled up into a ponytail ending at the bottom of his neck while his hair in the front hangs down past his chin on the right side covering his right eye
Eye Color: Light blue
Height: Five foot eight
Weight: one hundred and forty
Clothing: A black long-sleeved shirt that is opened at the shoulders it is also loose-fitting he wears a cat-eye necklace held together with a chain he also wears blue jeans with white shoes

Maybe if you gained my trust I would tell you

You have to look out for yourself before anyone else