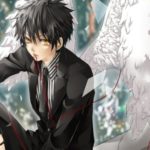 an angel who was sent to earth to protect it

was walking home after buying a new manga, when he saw a girl getting robbed. Mushi ran towards the guy not noticing he had a knife. Unfortunately Mushi died but he still got a chance to stab the robber back before he did. After a while Mushi woke up in heaven people were all circled around him because he was supposed to be the most powerful angel. He was sent back to earth but as an angel he then protected earth from any threats.