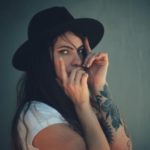 Simple human lost in the multiverse because she was in the wrong place at the right time.

Delaney is the daughter of a well known Thoroughbred horse breeder, and grew up spending her days on horse back or singing. Those were her two passions in life. When she came of age she stepped away from the equestrian life and made her way into the big city to pursue a career as a musician. She landed a few solo gigs but her break through came in the form of becoming lead singer to an up and coming band. The years passed in a blur of concerts, drugs, and alcohol. After a night of partying she found herself stumbling down the back alley of a club heading towards her car and driver. The building that shared the alley with the club held an experiment that failed and after an explosion that brought the wall down on Delaney her world was forever changed. She managed to walk away with minor visible injuries, but the blinding blue light that engulfed her prior to the collapse left a permanent change to the composition of her genetics and turned her into a portal to the multiverse.

With no control of this change, Delaney finds herself ripped from multiverse to multiverse. She has lived for years with this, often only spending small amounts of time in one place. But this life is taking its toll, can she survive the next switch?

She continues to live a reckless life of alcohol and drugs, because how else does one cope with never knowing where you are? If you will survive the day? The only constants in these multiverses have been the three things she knows she can survive on. What could possibly be the third?

Delaney works hard to adapt to her new surroundings after every switch, but she is most comfortable in a simple t-shirt, form fitting jeans, boots, and her one constant, the hat. She has tattoos along her left arm, and several other areas of her body. Will you be the one to discover those?