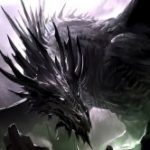 The true meaning of a chaotic good being, acting as a counterbalance for the gods and keeping the natural order. A chaotic paladin deity and a dragon hybrid.

The Vanguards: We are a research organization, not an army. A vast group of like-minded adventurers united under the Iradyum Code. Our influence spreads throughout the multiverse and we seek to make friends and allies wherever possible. The intelligence and research from out explorations of technology, magic, and culture has made us one of the most advanced and powerful groups in the multiverse. We fight only when necessary, we are brains before brawn and peace before violence. We act in chaos whenever our code is threatened by the corrupt.

Tyler grew up with what appeared to be a normal family life. But in his later years at home he began to find small clues about his family. Something that hinted at a bigger picture. Around his 18th birthday he began to feel changes inside of him that seemed off. He searched for a way to put together the puzzle pieces of his bloodline and his family, but time soon passed and he found himself driving off to university and forgetting about his little mystery. He studied multiple years in college majoring in physics but also studying music theory. He had a childish love of partying, girls, and video games, but another thing that he couldn’t get enough of was learning more about the world. He eventually turned to studying mythology. In his fourth year of college, an event happened at a family get-together. Tyler was speaking to his parents for the first time in years when something flashed in the corner of his eyes. Tyler keeled over clutching his heart as the most agonizing pain he had ever felt washed over him. His father looked down on him in those last few moments before Tyler blacked out, displaying a dagger and a sick grin. In his reverberating voice he boomed “love makes us all weak” before abruptly killing every family member he had in front of him. His vision darkened. He woke alone, in the middle of no where, his body changed, wings sprouting out of his back, the ground charred around him, and tears of rage plastered to his face. As Tyler stared into the sky he spoke in a voice of fury “I will be stronger than you coward, and I will not give up love.” He hunted down his father’s scent only to stumble on a warehouse. When he entered he found rows of men dressed in cloaks, all looking to his father with wild eyes, chanting in an ancient language. “Brothers, I present to you, our god, the dragon that I have raised since birth has now come to take us into the next life, remember, love makes us..” his speech was cut off by Tyler’s claws digging into his neck. He tore the last member of his family to pieces before massacring the cult. When his rage finally subsided, Tyler returned to studying and researching, the thing he did best. He grew in knowledge on the dragon soul implanted within him as he read through the many books that the cult kept. He found the locations of the cultists and hunted them down across the world, extinguishing their message and killing every member that tried to blend into society. During his hunt, he gained an unprecedented amount of magical and combat knowledge that grew into the many abilities he has today. While he wasn’t truly immortal in those times, the cultists seemed to believe he was their god, his killings were what they wanted. He grew in strength and soon delved into voiding, the magic of opening tears between world. He eventually landed in Hellafyno after he jumped too far from realm to realm. He had no idea where he was at first, but he fit right into the adventuring science fantasy world. After many years of quests and battles, Tyler became caught up within a war against the new gods in the age of wonders. Gaia, the goddess of the planet, favored him as a champion, and in a final attempt to save the realm, she gave her blessing to him and his allies in the fight. This blessing gave Tyler and his allies powers that far surpassed the chaos gods, the fight was a slaughter. There was little left after the war, but the combined power of the new deities that claimed victory in the fight, Tyler included, was able to reform the world as it was before. Tyler and his allies made new gods and revived the millions that died at the hands of the chaos gods. After this monumental battle, Tyler retained a measure of that godly strength, however he has never used it since. His new found power increased his magical and physical abilities even further but he made it a goal to be the strongest without releasing his divine power. Becoming immortal, he stayed in the physical body of a man, about 25 or so, yet he has been alive for decades longer. Once he was sure that his new home was safe, he began to search for a profession to gain wealth. His combat prowess was realized by an aristocrat fallen angel who ran a company known as ALL Corp. He was hired as the general of their military and he became the main protection detail for the company. Soon he rose to being nearly as successful and wealthy as his boss, with that wealth he formed a group on his own known as The Vanguards. They set out into the multiverse for research and diplomacy with as many allies as they could find. Tyler and his people became known as one of the strongest units in the galaxy, becoming a military force for their allies, though the group is still made of explorers at the core. The amount of magical and technical power they have as well as the number of allies in the multiverse that they have make them an undisputed super power.

Tyler has medium length dark black hair, orange dragon eyes, and sharpened teeth that combined with his 6’8 ft 230 lb frame make him an incredibly intimidating individual. His wings are skeletal with a mix of bones and leathery skin stretched over them. He wears a thorn armor suit in combat with a flexible Kevlar like body suit underneath. His casual wear normally consists of normal earth clothing, with dark T-shirts and jeans. His long dark hair nearly shoulder length, sometimes tied into a ponytail or hanging down in a mess of fluff. He also wears a black leather trench coat from time to time.

Tyler’s dragon form is a large towering black armored beast, it can be the size of multiple airliners, or the size of a hatchling.

Tyler has a partial dragon form that he will use at times against large groups of enemies, he grows about 2 more feet in height and becomes even deadlier than in his power masked human form

Tyler’s full god form was one he vows never to release unless it’s in the defense of hellafyno, as he possesses uncharted power. There is no description for it as he only used it once in an unperfected form in the age of wonders

Tyler usually doesn’t keep many physical objects on him, this is explained by his extensive list of powers and abilities.

User has the ability to manipulate the fabric of reality, tearing open portals between worlds and dimensions, traveling with ease and storing items and weapons to be summoned at any time.

User’s human form merged with that of the dragon, allowing him to expand his scales and use them as armor. This also provides enhanced strength, agility, senses, and other defenses. This also provide the ability of fire breath attack and poison/healing smoke.

User is capable of understanding magic and feeling it in a way that top of the line magic users would, due to immense study or exposure.

User has natural affinity toward earth and excels in manipulating and shifting it.

User is capable of using runic magic at high level for a number of things including utility, alchemy, attack, and defense

User has soul aura of any color representing the ability to reach out and physically alter something or attack.

User has soul aura of any color representing the ability to reach into spiritual realm and alter it, can be used to crush chakra points and cause organ damage or healing through single strikes. (Similar to the Jutsu used by the Hyuga clan in Naruto)

User uses fighting style created by Tyler, a perfect mixture of Fire and Soul energy combined and balanced to create a flaming aura with black coloration, one of the most controllable and damaging fire based Magic ever formed.

Tyler has weaknesses against the elements of ice, water, chaos, and corruption. Near his stomach is a black ball of flame that would put his physical body into incapacitation, one of the few ways to fatally wound him.

in a code and the natural law. I am an agent of chaos for the sake of good. All sentient beings are born with natural freedom and rights that shall not be encroached upon. The multiverse is a natural balance that must be upheld. Power can be given and taken, it shall not be abused. I follow only the laws of the natural world, any other superficial rules I follow are for the sake of convenience. If freedom is threatened, morality is broken, and power is abused, the vanguards will act as judge, jury, and executioner