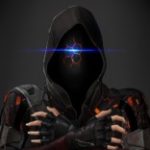 The technomancer, proof that science can access the paranormal, proof that an undying curiosity and will can take man into a world that is far beyond his comprehension, and proof that a man in this world can still comprehend.

Kelvin grew up in the United States in modern day Earth, both parents being killed during a home invasion at a young age, he was left being tossed around in the hands of the state as an orphan. He was never a secluded or introverted individual however, earning money from other kids at school at a young age through manipulation and working with his obviously high intelligence. At around 15, Kelvin had enough experience and cash to run away from his current home. His foster parents, Jessica and Lyle, spoke to him however before he left, they were admittedly very loving and caring of him, but they knew how he felt, and even more, how he thought. “You don’t want to be a kid anymore do you Kelvin, you can’t be confined to the simplicity of it.” Jessica said as she stood beside him, at the front door of their apartment. “Every species must evolve mom, and it’s time that I let natural selection take its course, there is more to this life then the hell of monotony, I intend to uncover the secrets that our race can’t.” Lyle came up softly behind the two in the moonlight, Kelvin standing beside Jessica with his bags packed, and he placed his hands on them, one on his wife, the other on his son, a tear in the corner of his eye “I knew you would leave one day man, I just hope we did ok as parents. I believe you can do what you put that big mind of yours to.” Kelvin showed rare emotion as he sobbed softly, hugging them both “I’ll see you again someday.” He said pitifully through his tears “but now is the  time.”  And with that, he left for his new life, hard as it may be, he wasn’t an adult yet, all laws dictated he couldn’t be out on his own, but he made it, he had the money saved and moved to Georgia where he purchased a warehouse on some land, maneuvering around the legality issues and with his intellect and planning, became one of the smartest minds on his planet. Fast forward through the experimentation, the conflict, the many government jobs opened to him, the breakthroughs he made and the wealth that the US government showered him with after he single handedly bridged political gaps, made the military the most unrivaled on the planet, and vanquished all the debt, through his success on earth, to the day that he sat within his Georgian lab, his first warehouse, clicking away at the keyboards around him as many screens and strings of numbers danced around his monitors. He was now 22 years of age, and he was past scientific discover, he wanted the paranormal. With his government funding, his intelligence, and a little bit of luck, he found a way to put him through a portal onto a planet trillions of lightyears away from his own, this was an expedition waiting to happen. So he prepared, his brain already implanted with the ability to control every single one of the expanse of gadgets and weaponry within his lab, his body covered in a headed armor jacket, covered in a robotic suit, taking slow puffs through his filter under the mask “for progress.” He muttered to himself, before he stepped through the wormhole, and straight into the beyond, with every expectation that his body would never be seen again.

While Kelvin is usually covered in some form of mask or technology that covers his regular human body, he has a tall and slim figure with a decently toned body, around 6’5 with pale skin, medium length, combed light brown hair, and bright curious blue eyes. He is usually never seen without the gas mask that covers his lower jaw due to the injury that Kelvin sustained during one of his many self tested experiments. His face is carved up on the left side and his lungs must take a certain filtered type of air once every 6 hours, so he keeps the mask on at most all times. He has plenty other wounds and stitchings across his body as well.

Kelvin’s inventory in full is to large to be named, he tends to carry normal items on him, phone, wallet, and such like that, but he also has a gas mask that is always with him, a balisong/butterfly knife with a crimson design on it, and a five seven hand gun kept within a holster in his hoodie. Besides normal stuff though, Tyler, being the technomancer, is capable linking and porting to him, any of the millions of weapons and things he created in his warehouses through brain implants. He also has the ability to shift the technology around him, moving stuff with his thoughts and reshaping things completely when needed. His many suits and weapons give him plenty of different abilities and enhancements

Kelvin is not normally vocal about it but he has an incredibly high IQ and the ability to outsmart and manipulate nearly anyone, he has a slightly skewed mentality and can go as far as self harm and risking death just for progress. He is in a way a classic mad scientist.

That even if talent may exist, hard work is what makes someone a god in there field, and not even born talent can work over dedication and spilt blood.