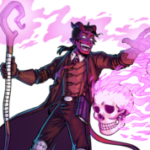 A traveling tiefling with a connection to a shadowy eldritch deity

Anyone who can catch the wander eye of this arcanist

Single if it matters

Zariel was raised in an adventuring guild in a realm known as Putralsian. He struggled with communication from a young age but he made up for it well with his quick mastery of blades and the arcane. He seemed to be proficient with most combative tools that he picked up and even in his early teenage years he found himself questing with many established adventurers, taking on missions across the land. While he always had a habit of saying whatever came to his head and never quite getting his point across, people found him quite lovable and many looked up to him in the guild. He had quite the rambunctious and playful attitude and was known to insult his enemies mid fight. He was an established musician in his adulthood on top of adventuring and enjoyed playing the horn as much as he enjoyed one night stands, getting drunk, casting spells, crossing blades, and nailing pesky bandits with his throwing cards. One day he was scooped out of his bed by a muffling dark energy as a female voice whispered to him “expand your horizons, there are other worlds that need your talents.” After what felt like only a few seconds he woke up gasping, covered in dirt and gravel and laying at the bottom of some collapsed sinkhole, light peeking over the top. After standing and gathering his thoughts he casted spider climb and ascended the walls with ease, only to find himself on the surface of a new place, and in the distance he saw an inn, all good adventures start there right.

Zariel is a devilish creature with long black hair pulled into a ponytail and glowing white eyes. He wears a a brown coat and light leather armor with metallic locks and pads.

Zariel carries a shadowy magical tome, a magic deck of cards, a staff of lightning bolt, and a rapier of swiftness.

in very little bit my own cunning and knowledge