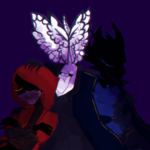 “Where does one go when they die?” – Funeral of the Dead Butterflies’ Entry

“This magical bullet can truly hit anyone, just like you say.” – Der Freischütz’s Entry

“I’ll hang his head over my bed. Only then can I get up in the morning without having a nightmare.” – Little Red Riding Hooded Mercenary’s Entry

"They say the mourner with a huge luggage on his back had come to be a savior to all. Eventually, he himself was trapped in this place, and now he wanders the company with only the memory of an empty faith. He's carrying a coffin. A large coffin to pay tribute to the employees who have nowhere else to go. However, it is still too small to comfort those innocent sacrifices. Inside it is a kaleidoscope of butterflies waiting for the moment to fall asleep. Until then, they flutter their wings uselessly. The wings that may have been many jumbled into one, or one split into many. Butterflies are supposed to pollinate flowers, but not a single proper flower blooms in this place. There is no choice but to wait. After all, there must be an end to every world." – Funeral of the Dead Butterflies _________________________________________________________________ "When a marksman received a gun from the Devil, the Devil proposed a childish contract: The last bullet would puncture the head of his beloved. The moment he heard that, he sought and shot all the people he loved Then he told the Devil "This magical bullet can truly hit anyone just like you say" With the last bullet gone for good, the hunter traveled to numerous worlds Sometimes he helped those in need or fought evil, but it was all done on impulse not a gesture of goodwill or ideals In one world, he was called a righteous hunter, while in another he was a bloodstained gunman" – Der Freischutz ____________________________________________________________ "I'm a pro. If you make a request, then I mu. I used to be expensive, but I'll cut you some slack here, under one condition. Hand ight help yothat dreadful, cunning bastard over to me if you ever see him. I’ll hang his head over my bed. Only then can I get up in the morning without having a nightmare. Between us, there's no victory to be won. All I think about is how I'll kill that bastard in a way more gruesome and painful than the last time. Thus, there's no toasts to raise. There's no deliciously baked cakes to eat, or wine to drink. I got used to grinding the axe instead of picking flowers when I was 15.” – Little Red Riding Hooded Mercenary

Part of its origin is currently unknown, but in its entries it is mentioned that this Abnormality came to the facility to ‘free’ the employees, to return them to their home after they die. However, due to them being bound to the company and only able to return when they are ‘discarded’, the objective was difficult to achieve. The Abnormality was then captured by the corporation. though it was difficult to keep the end in one place?

The origin of Der Freischütz is as follows: A hunter received a gun from the devil most likely after reaching a point of despair that caused his soul to fall down to hell that the final bullet would end up shooting and killing all of his beloved. After the bullet that killed his beloved vanished, he traveled to numerous worlds, doing what ever he felt based on impulse. One day he realized that the devil is no longer around him because his soul had fallen to hell and the contract with the devil had been completed. The marksman ultimately became a devil himself, shooting whoever he wanted to gather souls.

How the abnormality was captured or arrived at the facility is unknown.

Little Red is assumed to follow the same origins of the tale of the same name, and the twist in her story may have occurred when facing the Big Bad Wolf at the end of the tale. Although it is unknown what happened at the end, her scars probably were the outcome of such an event. After losing her eye to the wolf and failing to kill them, her desire for intense revenge was fueled. Afterward, she left her previous life to become a wandering mercenary, probably at the age of 15 or higher, training and working for contracts, without any place to stay. Where she got her weapons are unknown.

Where Little Red was found and how she arrived at the facility is still unknown, but she might’ve wanted to find the wolf in the facility.

Funeral of the Dead Butterflies (T-01-68) is a humanoid abnormality which has a white butterfly for a head and possess five arms, two at each shoulder and one coming out of its neck. It wears a black suit and coat with a single white sleeve for its middle arm. It carries a black coffin with a butterfly engraved on its lid behind its back with two of its extra arms. According to the flavor text, the coffin is full of butterflies.

Der Freischütz (F-01-69) is a humanoid abnormality that wears a large cloak and grey clothing. The color palette of its cloak consists of a black, yellow, and blue. It has a black wispy form with no discernible features besides its eyes, head, arms, and legs. It carries a large gun, most likely a musket, with it.

Little Red Riding Hooded Mercenary (F-01-57), or Little Red for short, is a humanoid Abnormality in the form of a female mercenary. Along with black clothes and bandages, she wears a red hood and covers half her face with a teeth-like mask. Only a single yellow eye can be seen from her face. She has several scars on her body, and seems to have blood near her feet. When in combat, she wields shotgun-like pistols, and a scythe-like dagger.

Funeral of the Dead Butterflies: 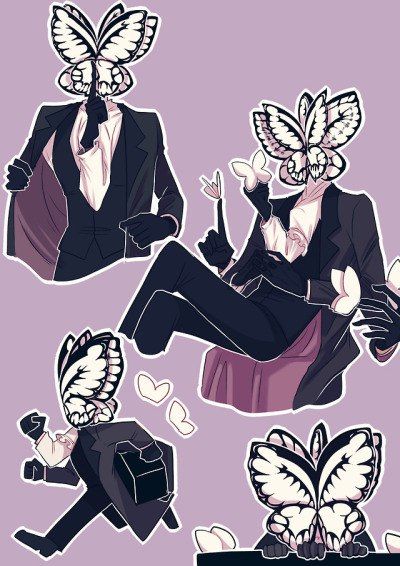 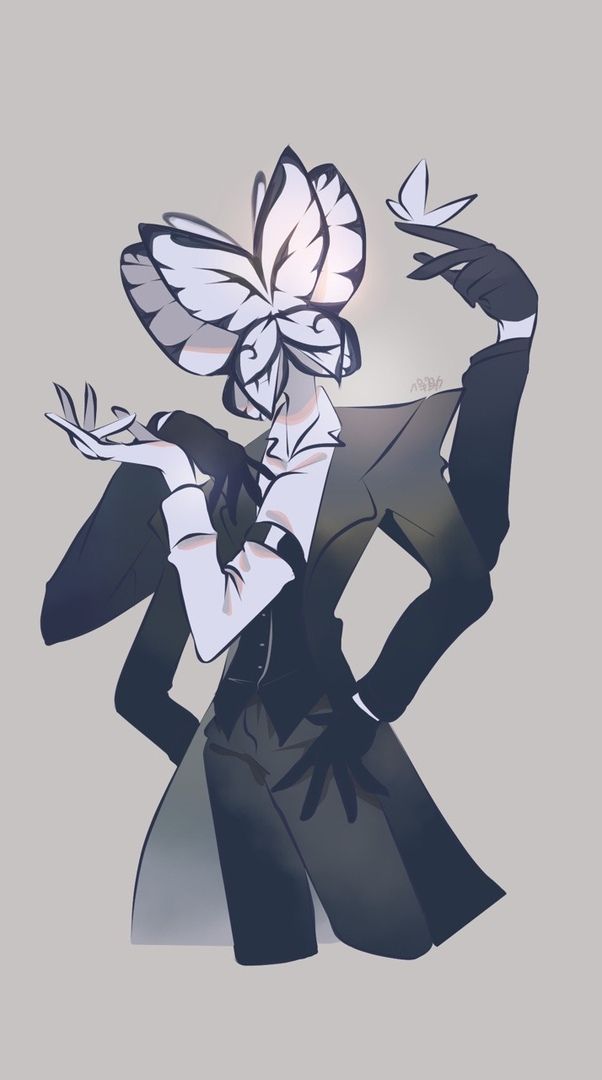 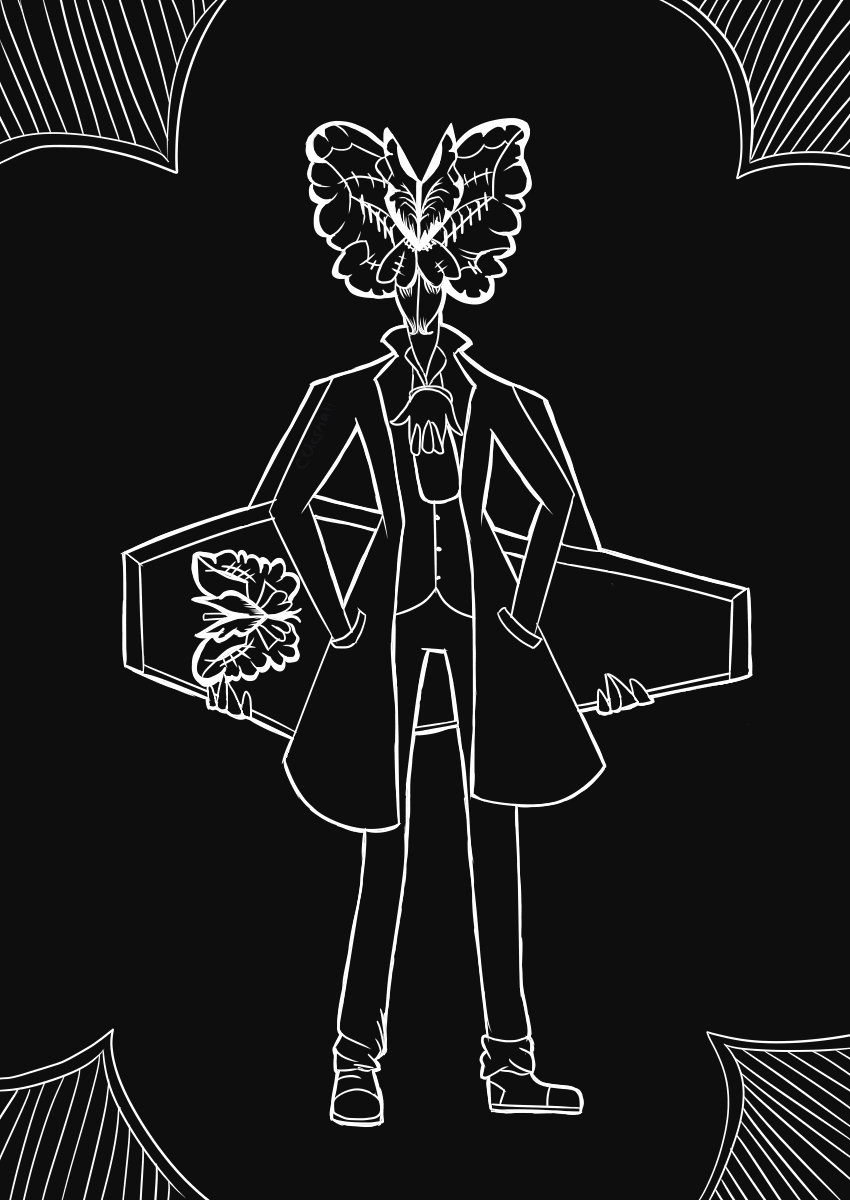 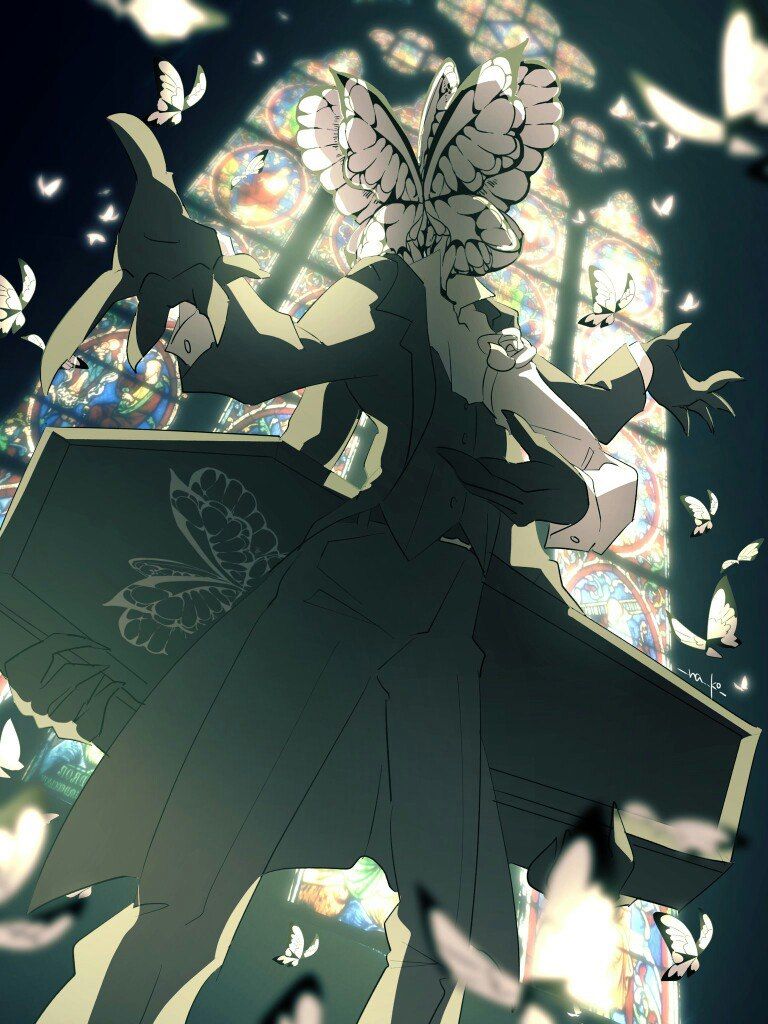 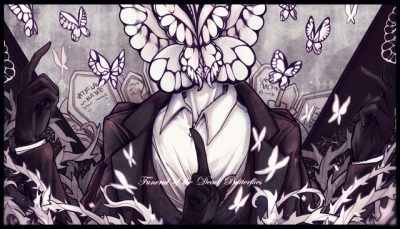 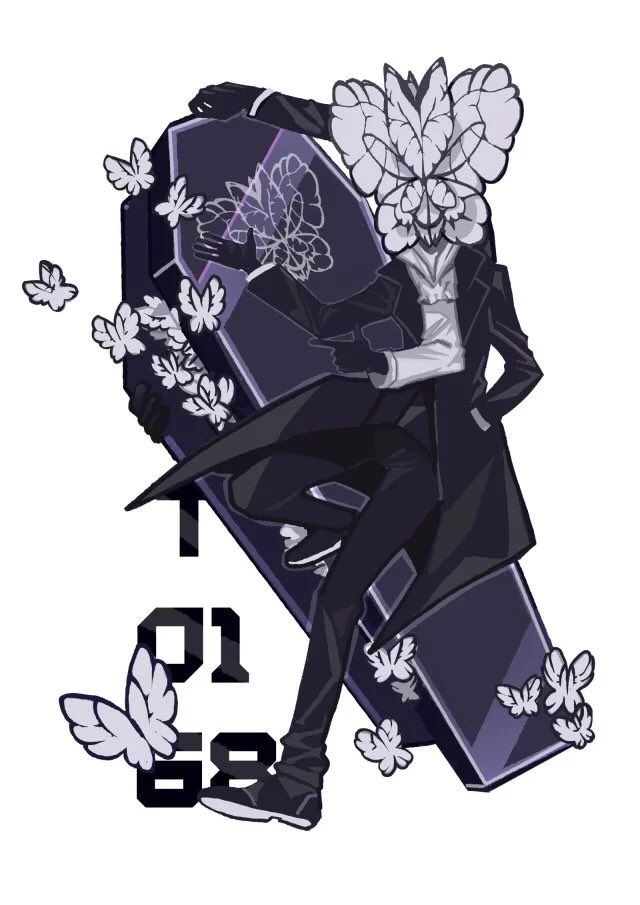 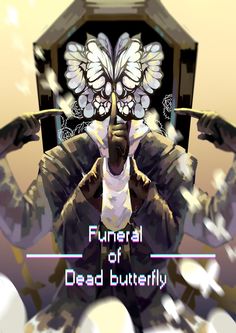 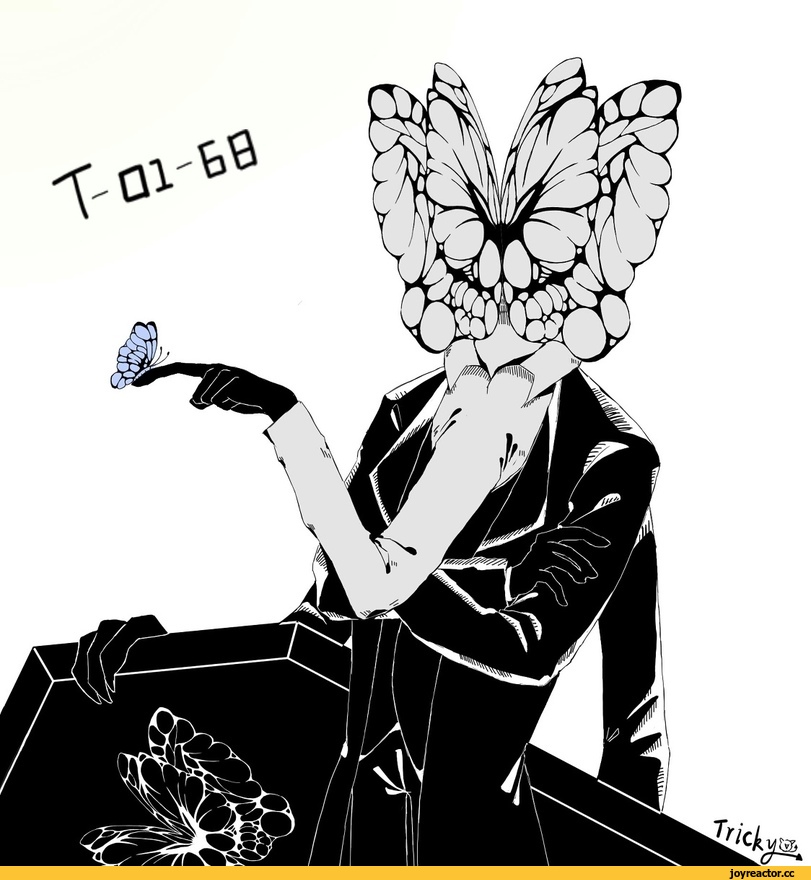 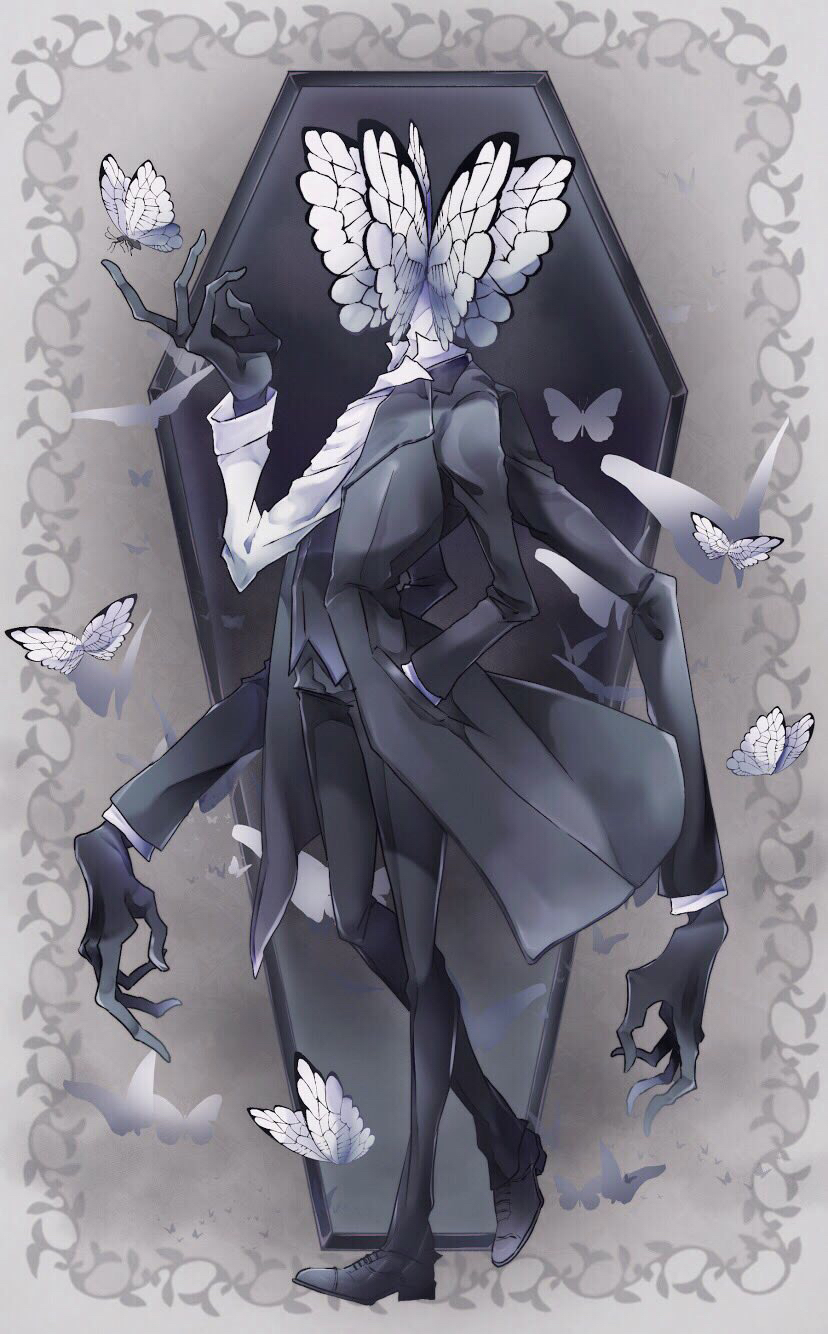 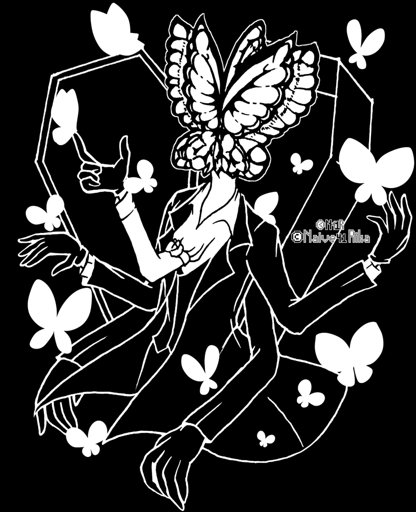 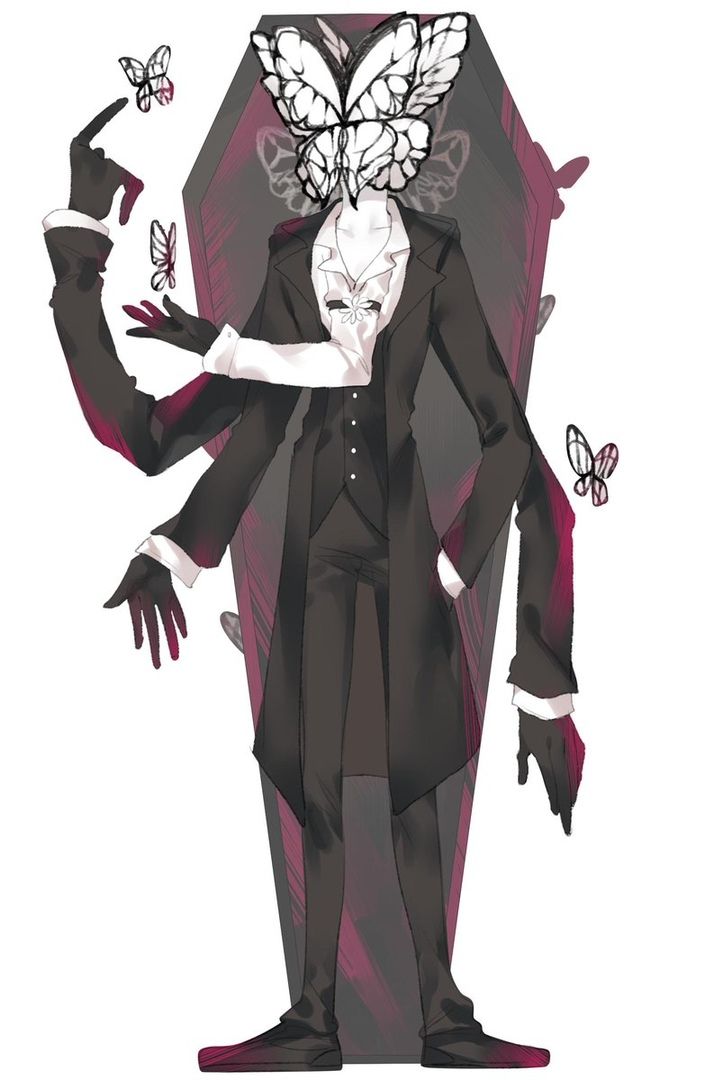 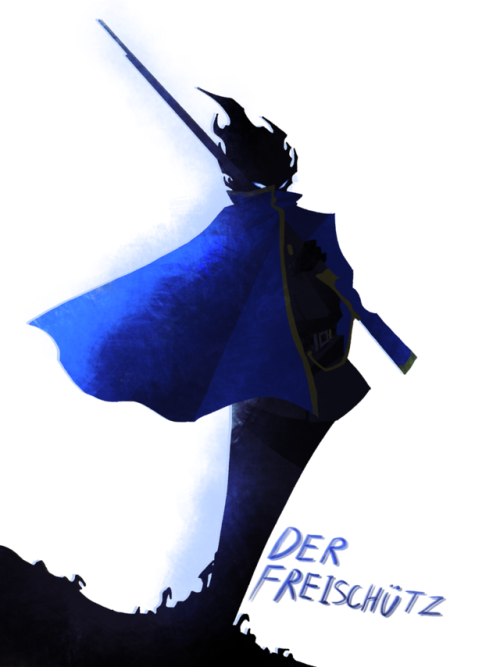 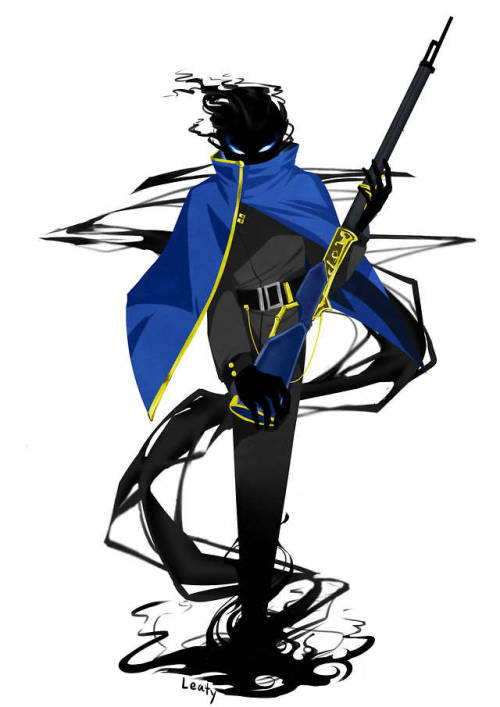 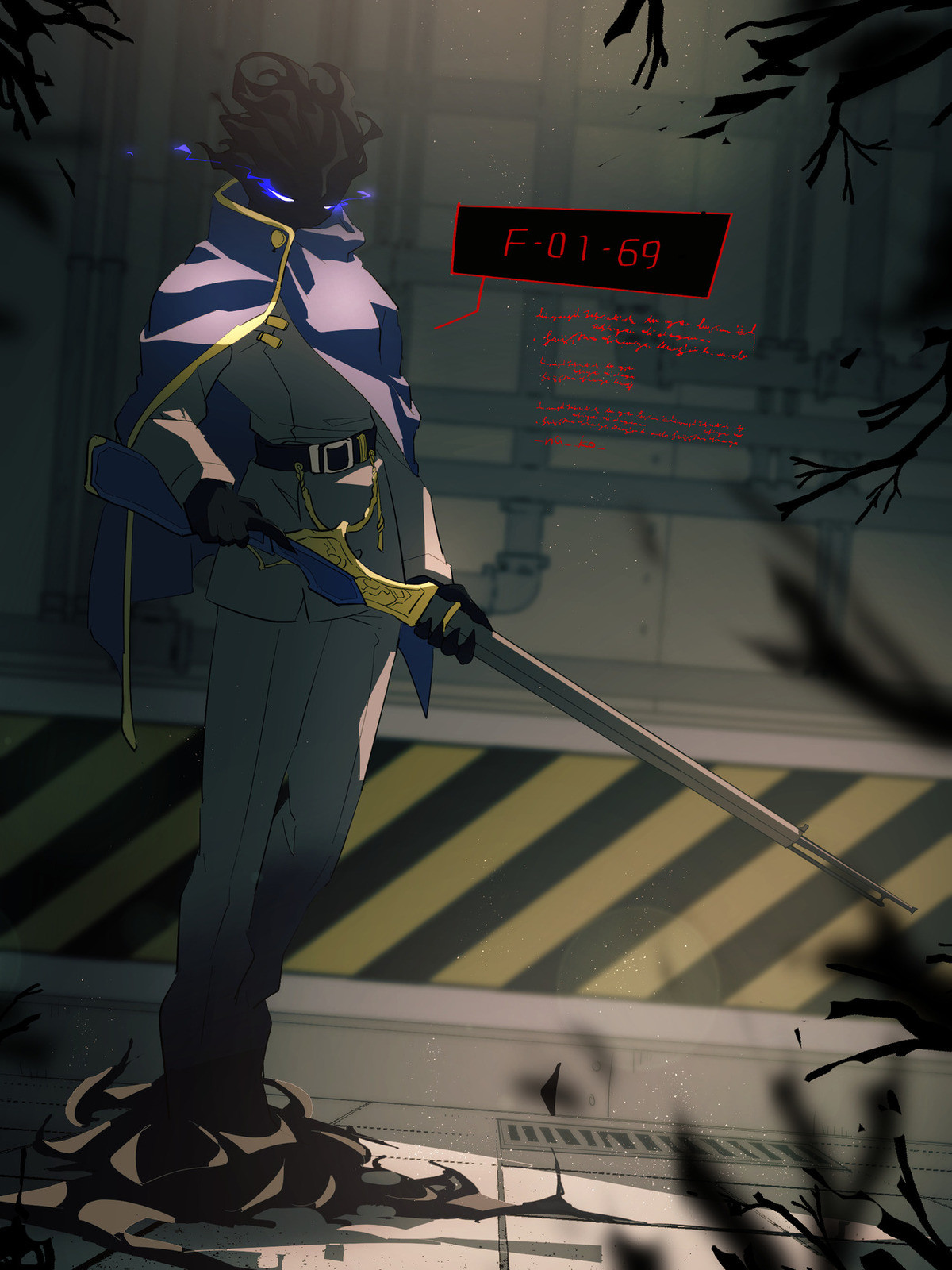 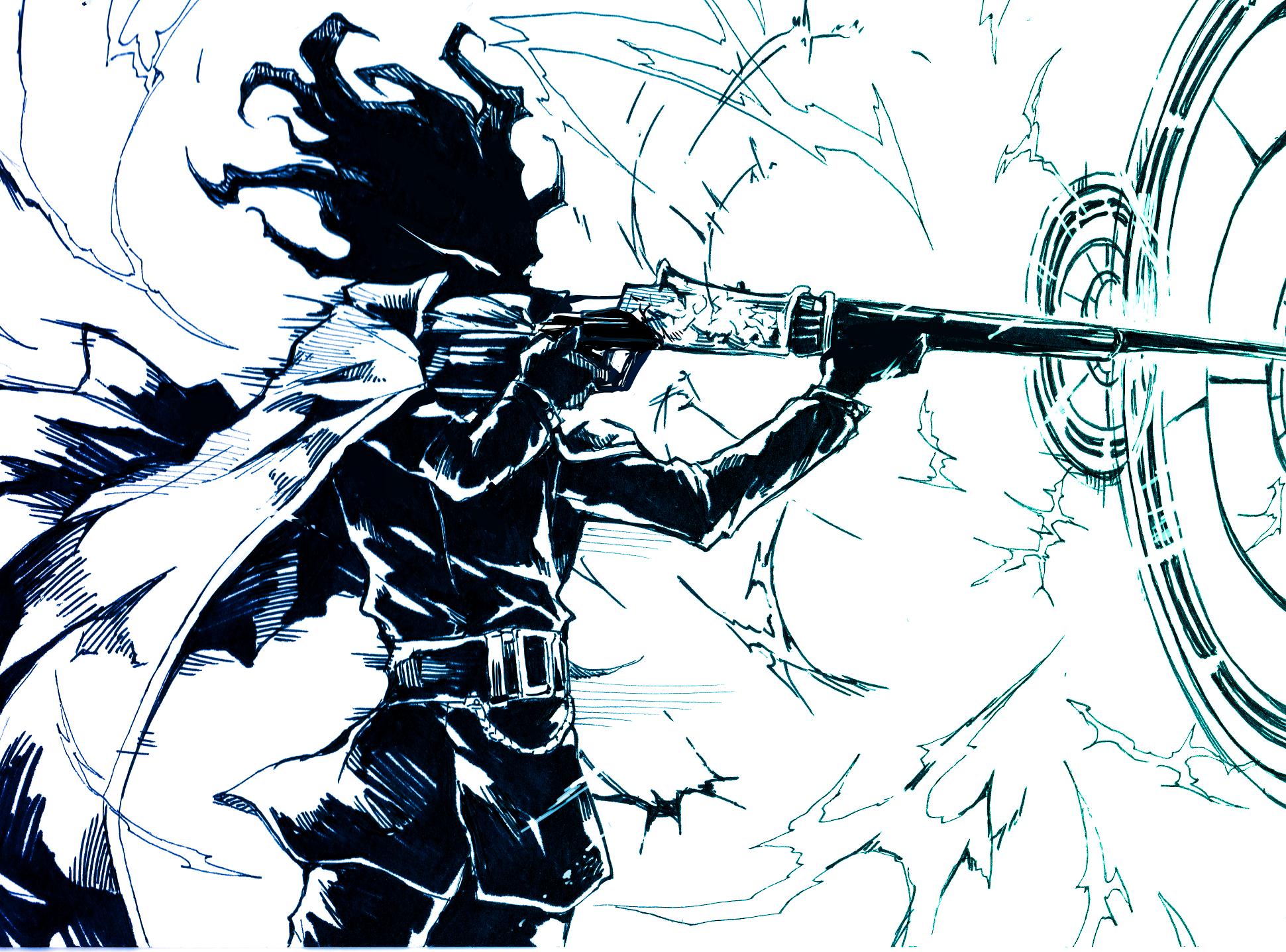 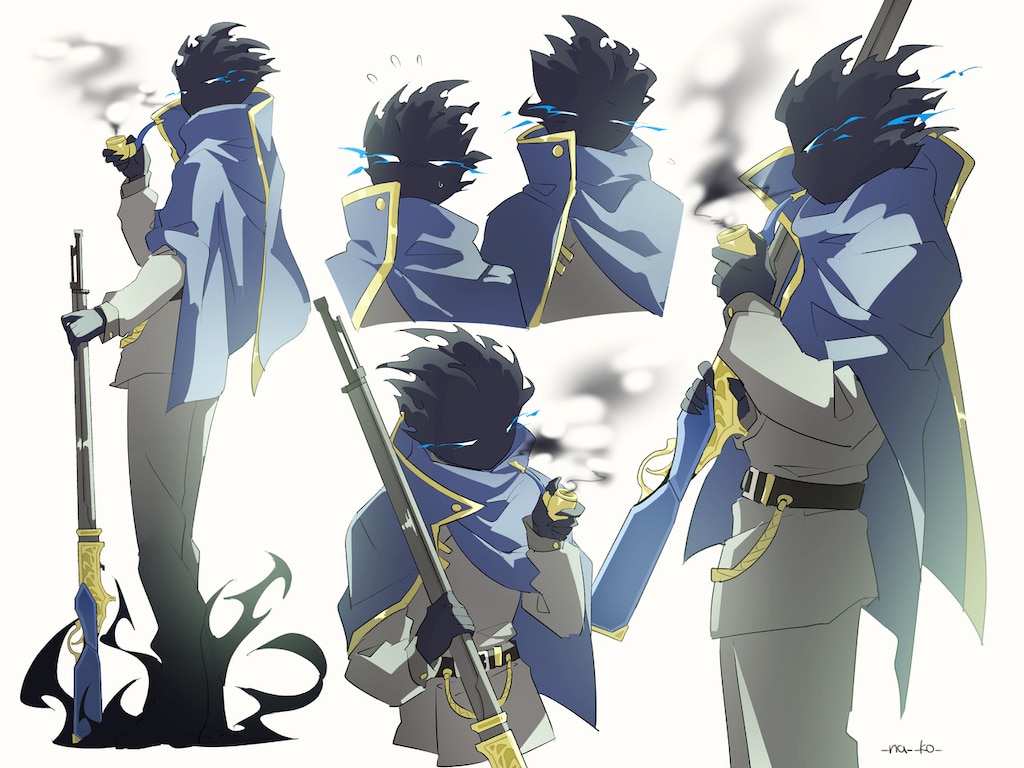 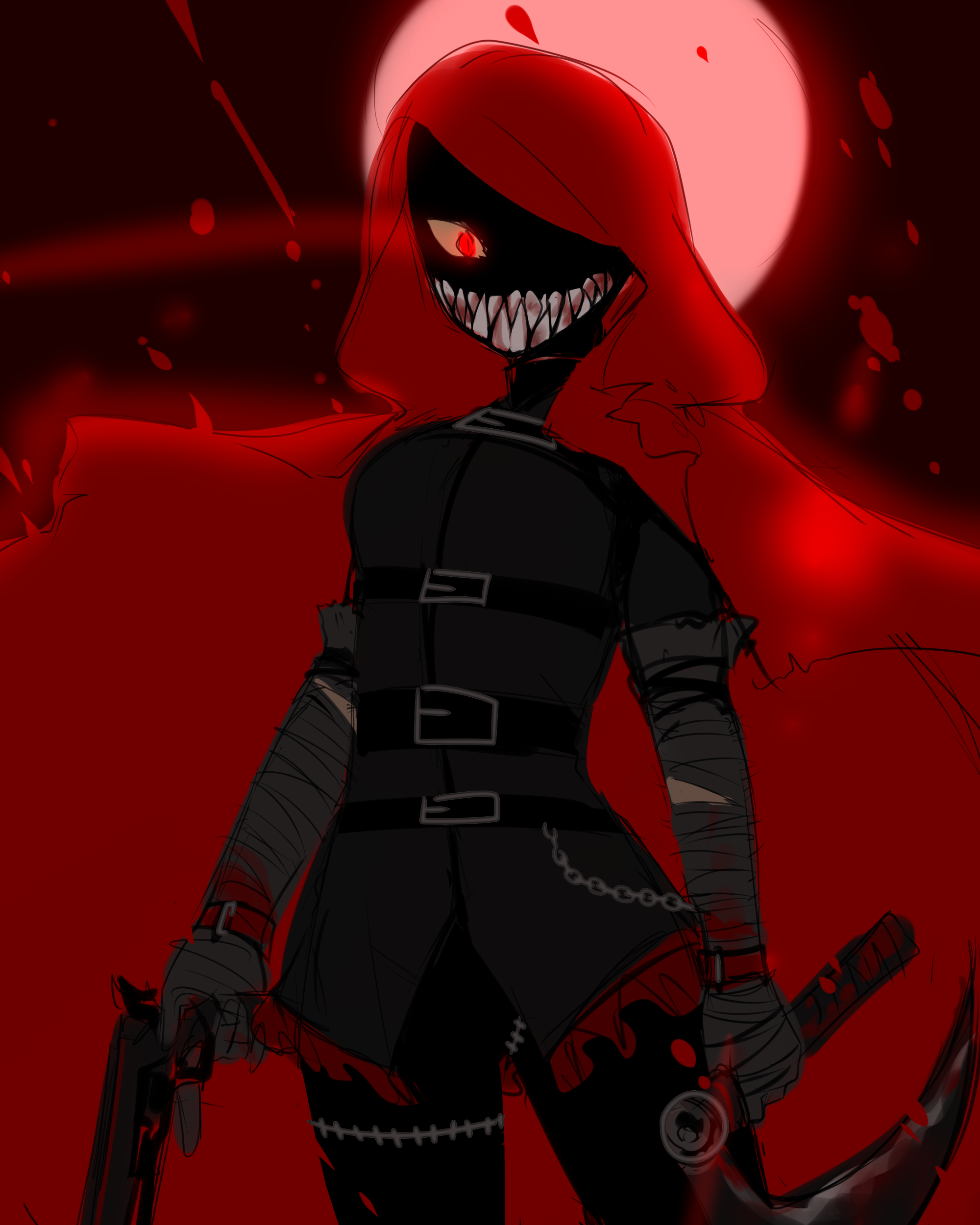 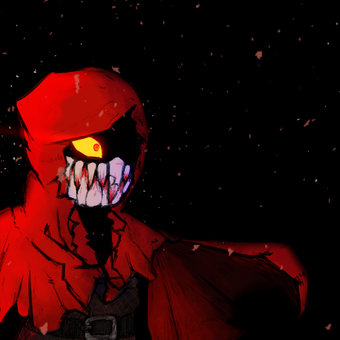 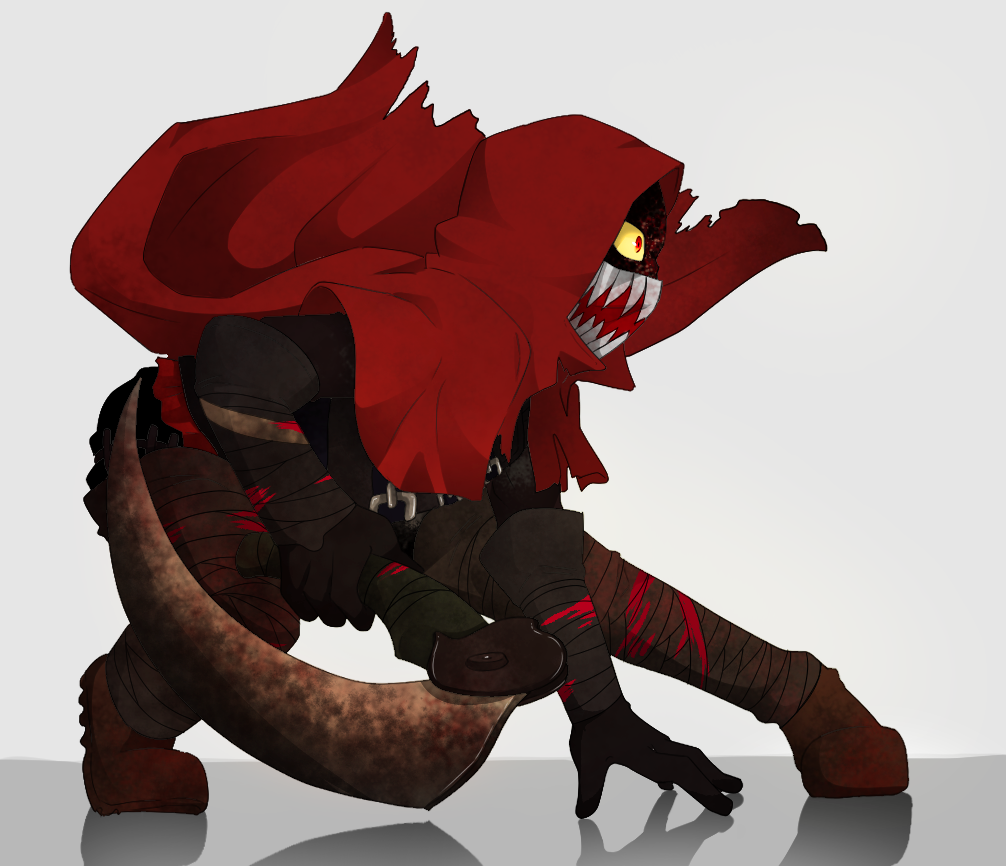 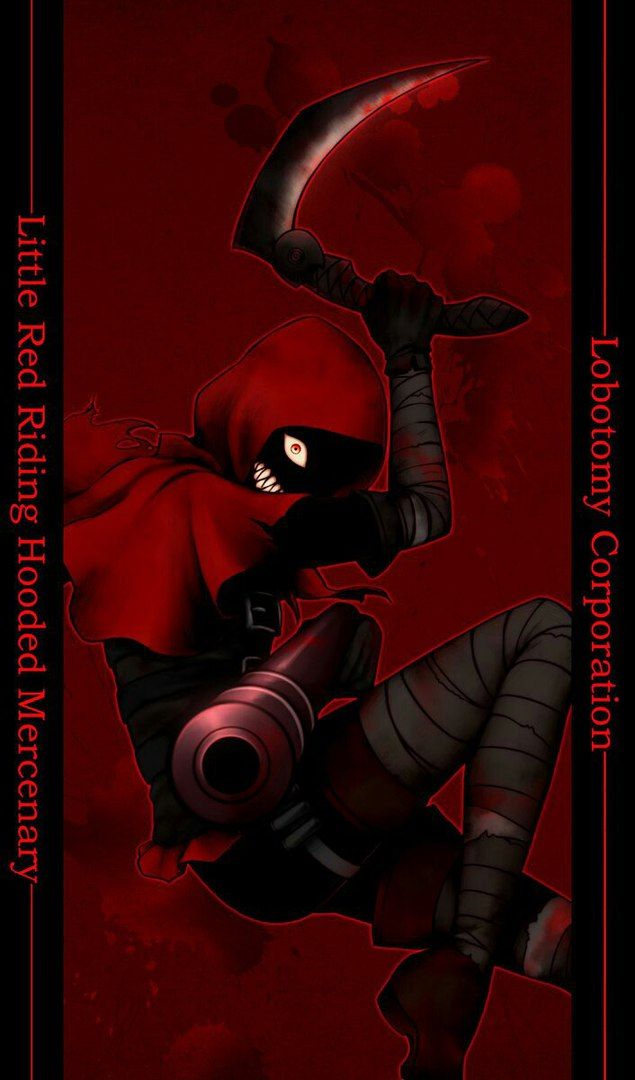 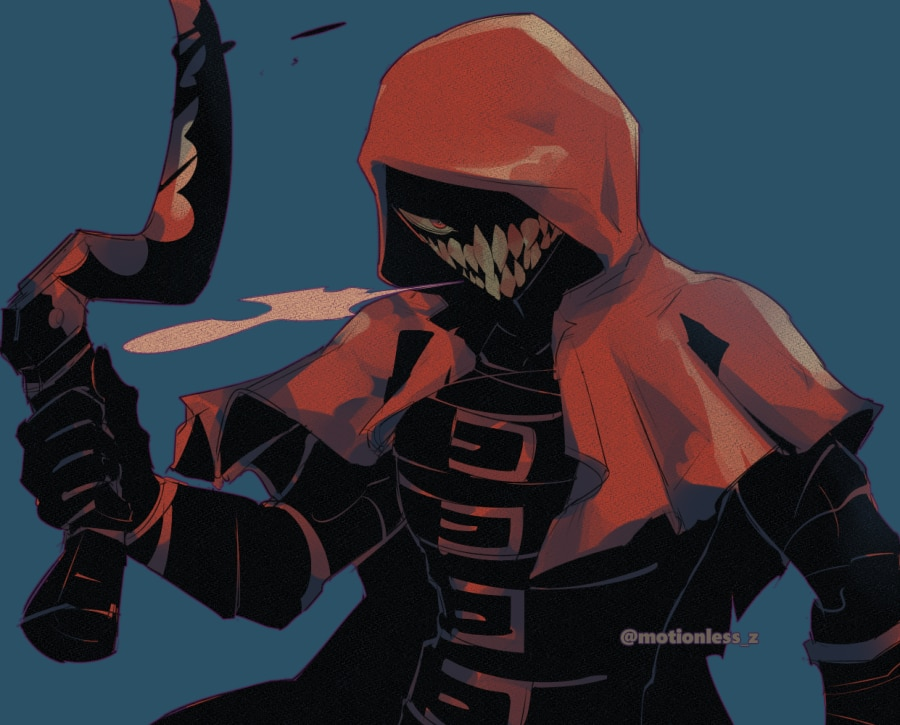 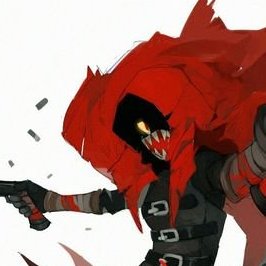 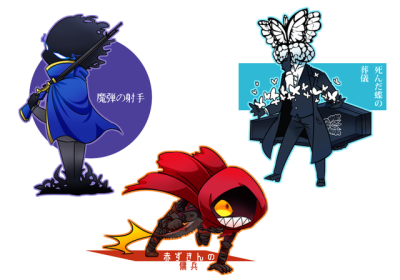 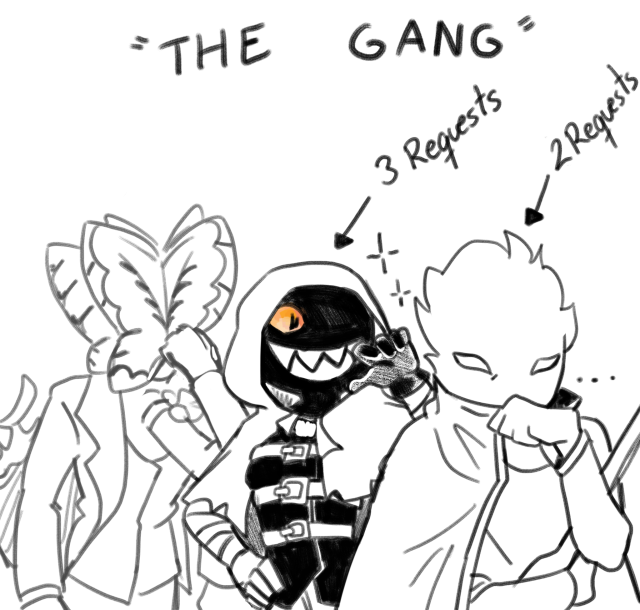