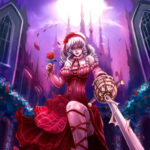 Anyone who makes me happy gender and sexuality play no part in my live life.

Once a member of the E-Chat Gatelands she ran away from that life insearch of a new path, once a rich princess she now has nothing trying to rebuild and recapture her empire in a new life. Her mother’s spirit with her every step of the way.

Big bright green eyes, thin but curvy, Reams of crimson hair, a face of freckles placed on white porcelain skin, wearing a once beautiful green dress now worn and thread bare due to it being all she had, it was once her mothers and she refuses to remove it in any circumstance bar bathing.

Absolutely nothing accept the green dress on her body, she changed when she left the gate, she became a woman of simple pleasures, nature and art to name a few. She no longer sees the need for lavish goods believing the weigh her down on her travels around the globe.

She is a young woman of many many secrets but one imparticular is a large wand made of oak with a small green emerald crystal in its center. Which she keeps in a pocket on the inside of her dress as a witch herself she believes that the emerald in the wand keeps her safe and that is the true reason she doesn’t like removing her dress.

She adheres to the humanist faith appreciating the earth and nature above all else.