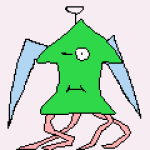 High Demitor Jonus, leader of the crusade to clear the planes of the unclean.

Born to the empire of Velt, on the plane of Veltus to relative obscurity. He rose quickly in the meritocracy through shrewd, and cunning calls on the battlefield against the kindred plague on his home planet.

With the last of the vampires banished from his world, he was awarded rank, and a small unit to pursue their kind on other planets in the galaxy. Further success earned him more power, more freedom to hunt down other impure beings. With a great victory over a world overrun by Lycanthropic beings, he was awarded the highest honor of the empire, the gift of reincarnation.

For hundreds of years he toiled and raised armies, hitting one cause after the next, until his galaxy was clean of dark magics and beings he dubbed impure. Over the next few thousands of years, he found expanded even further, until his whole plane of existence was cleansed.

Soon after, it was discovered that there were other planes. When the call came out to cleanse said realms, the Demitor gladly stepped forward first.

In his mind, his appearance is one of perfection. Pale skin, perfectly manicured nails, hair short and golden like his plate armor.

His face might be confused for a kind one if his eyes weren’t taken into account. Young features gave way to white orbs that bare a severity and cunning that betrays his age. His perfect teeth are more often shown in a sneer than a smile, and his wrinkle free face is often contorted in the rage of battle.

Enchanted sets of golden armor that is as ostentatious as it is brimming with protective scripts.
A sheath with nothing in it, that appears to have the ability to produce and store many weapons.
A golden kite shield shined to a mirror-like polish, also covered in arcane and holy script.
A book with the holy teachings of Vel, the one remaining god of his plane of existence.
A torch that seems to burn as soon as it comes in contact with air.

No secrets. Jonus is very honest about what he plans to do. Kill all impure beings. Vampires, Werewolves, Demons, Goblins, You name it. They are meant to be killed or enslaved and bled dry over generations until there is nothing left of what made them different.