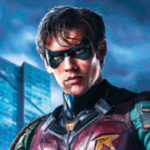 Dick Grayson was born in 1990 to John and Mary Grayson; a pair of trapeze artists in Haly’s Circus, known by their stage name The Flying Graysons. In 2002, John and Mary fell to their deaths after Tony Zucco burned their trapeze ropes with hydrofluoric acid, when Dick was twelve. Dick, now an orphan, was adopted by billionaire playboy Bruce Wayne.

Boiling with grief and resentment, Dick made several attempts to run away, stealing Bruce’s car to search for clues about his parents’ deaths. Bruce, sensing Dick’s turmoil, revealed himself as Batman – the cowled scourge of Gotham’s underworld – and offered Dick a position as his sidekick, Robin.

Training to be Robin

During his time as Robin, Dick befriended two other bird-themed vigilantes; Hawk and Dove. Bruce found their methods crude, but Dick forged a strong friendship with them both, reveling in every opportunity to use excessive force. He even pursued a romantic relationship with Dove, one that ended in resentment and jealousy.

Another of Dick’s superhero friends was Donna Troy, aka. Wonder Woman’s protégée Wonder Girl. They bonded over playing second-fiddle to two of the Justice League’s hardest hitters, and she inspired him to be a better detective, a better fighter.

In 2016, Dick discovered that Tony Zucco was his parents’ killer. Robin had him arrested, but Zucco was promptly released on account of providing the police valuable intelligence about the Maroni crime family. Furious, Dick ambushed Zucco’s convoy and beat him mercilessly. They were interrupted by armed Maronis who fatally shot Zucco while Dick watched.

As a result of having witnessed the brutal murder of his family as a child and his subsequent upbringing by Bruce Wayne, Dick has developed a profoundly thick skin topped by a near-impenetrable suit of emotional armor to keep himself protected from the world at large, dour, stoic, humorless, introverted and deadpan, Dick typically forgoes most human contact and keeps his feelings to himself. He does not get along very well with people, many of whom perceive him as rude, stubborn, anti-social, prickly and disrespectful. However he does have a soft spot for children, especially runaways as he identifies with them, and with a select few people who have proven themselves trustworthy, such as his late partner Amy Rohrbach. He has no relationships beyond his former circus friends or a few others like Donna Troy, and has thus far exhibited no interest in pursuing a romantic relationship with anyone. Due to his circus upbringing, Dick places great value on family, believing it to be central to his world.

Dick has a very clear sense of justice befitting a vigilante as well as a strong moral compass; that good people must be protected and criminals must be punished.

However, Dick’s outer persona hides a far darker side, a side which almost always comes out when he becomes Robin, when this happens, all of Dick’s repressed rage, hatred, anger, and pain is released at once and he becomes completely devoid of restraint or morality when engaging criminals or villains, inflicting pain and injuries on them so monstrously horrific that most who cross his path run from him automatically. This side of Dick is not, however, evil, merely merciless and absolute for he does not harm innocents regardless of the situation and works daily to deny it for it is the side of him that Batman cultivated and encouraged most.

After Rachel helped him let go of his inner darkness, Dick became more light-hearted, reconciled with his former mentor Bruce Wayne and reform the Titans team with his new friends and Jason Todd.

Peak physical condition: Due to his training with Batman, Dick Grayson’s body is at the pinnacle of the human condition. He has displayed peak human strength, speed, agility, stamina, reflexes, and endurance because of his extensive training. Dick has been shown jumping off of a building and landing onto cars without any discomfort. His condition also allowed him to keep up with and even defeat beings with enhanced abilities (such as the Nuclear Family), and he was strong enough to kick open a locked door and punch a hole in another. He could also lift Gar Logan by the throat with one arm. Dick’s strength was sufficient to contend with the bio-enhanced Deathstroke in a fight. His speed and reflexes were developed at an early age, as seen when Donna Troy threw one of his own shuriken at him and he caught it deflected a grenade thrown at him by Deathstroke with his staff, and he even retained his great reaction time in a fake reality when he caught a falling lamp. His conditioning allows him to recover from most injuries very quickly, though not superhumanly. He maintained his workout routine while he was imprisoned, which included chin-ups and dumbbell curls.

Master combatant: Dick is an extremely skilled martial artist due to years of crime-fighting with Batman. He can take down armed groups of thugs by using his combat skills and is also able to hold his own against enhanced individuals such as Nuclear Mom and Nuclear Dad. He was even able to fight off asylum security guards after he was heavily drugged and tasered. In Trigon’s reality, Dick had the advantage against Jason Todd in their hand-to-hand fight and the latter had to resort to using a firearm to win. He also proves to be an extremely capable teacher, since people like Gar and Rachel who had no training, after three months demonstrated combat skills and used swords. Dick’s incredible ability in close combat allowed him to subdue Jason with one hand and fight against Slade Wilson alongside Kory Anders. However, he could not defeat him on his own five years prior. Dick’s fighting style appears to be composed of Taekwondo, Karate, Jujitsu, Capoeira, Muay Thai, Judo, Wing Chun-style Kung Fu and Eskrima in addition to several Ninjutsu disciplines, including Taijutsu, Kenjutsu, B?jutsu, Shurikenjutsu, Kayakujutsu, Shinobi-iri, and Intonjutsu.

Dick possesses great stick fighting skills and can take down armed assailants with just his b? staff. He was also able to easily overcome Rose Wilson during a training, first using a b?-staff and then two sticks because Rose cut the staff with a sword. Before Deathstroke could attack Kory while she was down, Dick improvised a metal pipe as a staff to use against him and his sword in their continued fight, although he was disarmed by the former.

Master swordsman: Dick proves to be an extremely skilled swordsman, as he trained Gar, Rachel and also Jason Todd.

Master marksman: Dick has impressive marksmanship and has demonstrated this ability with his specialized shuriken. He can throw several at a time, or one with superb accuracy; he once threw one in into a gunrunner’s eye when saving Hawk and Dove, another into Nuclear Mom’s forehead, and another to cut the rope hanging Clay Williams. This skill was once shown again when Dick helped his cellmates escape from prison as he picked up the guard’s keys and threw them at a prison guard and a fuse box to stop the gate from closing.

Master acrobat: Dick was trained as a trapeze artist as a child and has developed many acrobatic skills. He can use these skills in combat, allowing him to dodge incoming attacks. He also possesses skill in free running and parkour, allowing him to scale buildings and trees for quick and easy travel. When chasing Donna Troy through an alleyway, Dick was able to easily scale a garbage truck and perform a complex flip maneuver off of a dumpster. Dick was able to use a car to flip over one of Arthur Light’s blasts, and he was also able to perform a back flip without using his hands during a training with Rose Wilson. When fighting off a carjacker, Dick was able to incorporate his acrobatics into a flip kick.

Skilled leader: Dick’s combat training as a child gave him the skills necessary to lead his new alliance even though two of the members have never participated in the battle.

Expert detective: Dick has been trained in detective work and detective work by Bruce and has proven to be just as skilled. He was able to tell that Nuclear Mom and Nuclear Stepdad were brainwashed, as well as which building Batman threw the Joker off of based on the position of the latter’s body and the angle of impact. Being a police detective, Dick received police training making him even more skilled in an investigation, interrogation and evidence collection as well as other aspects of police work. His status as an officer also allows him to gain information easily from officials.

Indomitable will: Dick has tremendous force of will and determination. He was able to resist the effects of the drugs injected into him at Agnews Asylum, even when the dosage was doubled completely. He also has a high pain threshold, as evidenced when he surgically removed a tracking device from within his arm or when he stayed conscious after being tasered while fighting asylum security guards.

Robin suit: Dick wears a protective suit whenever he is out fighting crime as Robin.

Briefcase: Dick possesses a briefcase to carry his suit. It can only be opened by passing a fingerprint and retinal scan.

Shuriken: Dick uses specialized shuriken that is shaped in his Robin symbol. They are capable of penetrating the concrete, making them strong weapons. One of them is R-shaped and is installed as the symbol on his chest plate.

Grappling device: Dick uses a technologically advanced grappling hook as part of his crime-fighting arsenal. The grapple line is strong enough to yank fully grown humans into the air, notably allowing him to separate enemies from their groups. As the device is primarily a traversal tool, Dick often uses it to scale buildings in seconds.

Smoke bombs: Dick uses smoke bombs when fighting crime, such as when he took down Tyler Hackett and several thugs.

Bo-staff: Dick uses a retractable bo staff when fighting crime. But later on while fighting the Nuclear family, the bo staff was broken into two.

Sidearms: Dick carries and uses a Glock 17 sidearm while on duty as a Detroit police officer. He also disarmed Benny of his SIG-Sauer P226R, using it to interrogate William Wintergreen in his home.