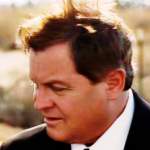 A long, long time ago,… in a galaxy far, far away. Ha! Okay,.. no. It was decades, and the place was Gotham City. There were times it did feel like a whole other galaxy, but that was because of the villains I had to face on a daily bases. I was Robin: The Boy Wonder. Maybe you’ve heard of me? I led a double life for years after my family died during that devastatingly horrible day. Let me fill you in. 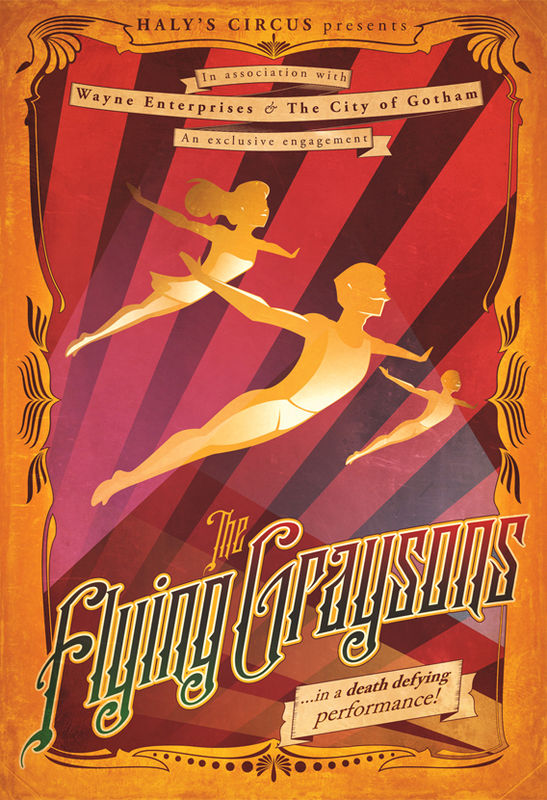 We were amazing! I was so proud to be apart of it. I had grown up into an acrobatic family who traveled around with Haly’s Circus, performing from town to town. At eight years old, I was the youngest member of the group that consisted of my father, John, my mother, Mary and I. People came from all over to see us perform.
Side note: I was born on the first day of spring. My mother nicknamed me “little Robin.” Little did she know how prophetic this term of endearment would be in my life. Also, when I was up on the trapeze, I reminded my mother of a robin.
So, naturally I would use this when the day came that I’d need a secret identity.
I joined the act at a very young age, having been trained in acrobatics from birth. Before one appearance in Gotham City, in which we were the main attraction, we were asked to pose for a photo opportunity with Jack Drake and his family, including their young son, Tim Drake. From that time on Tim’s one and only hero in the world was me.

While on tour in Gotham City, I overheard “Boss” Tony Zucco, a well-known and feared crime lord, threaten the performers unless the circus’s owner paid protection money. The owner refused, and that night I watched in horror as my parents’ high wire snapped, sending them hurtling to their deaths, all while many of Gotham’s elite watched on. I felt responsible, because I failed to warn my parents in time.

I was placed in an uncaring juvenile services system, on the grounds that social services was full. I got beaten up by a number of the inmates, and I was later sent to a Catholic orphanage. Bruce Wayne rescued me by adopting me as his ward, because he did not want to replace my deceased father. Frustrated by the lack of attention from my new guardian and the mystery still surrounding my parents’ death, I snuck out of Wayne Manor one evening to solve the crime on my own – only to stumble into Batman, who was also investigating the murder. After waking up in the Batcave, I was shocked to learn that Bruce is really the Batman. We succeed in revealing Zucco’s complicity, but the it seemed that he died of a heart attack before his arrest. Seeing a reflection of himself in me; that we could temper compassion with a thirst for justice, Batman made me the offer of a lifetime; the chance to become his crime-fighting partner. I then chose the name Robin, after the nickname my mother gave me, and my training began.
Bruce taught me fighting techniques and detective skills for a grueling 6 months. Finally, I had to pass a final test – “the Gauntlet”. I had to elude the Dark Knight on the streets of Gotham for one night – from sundown to sunrise – without any outside help. I succeeded, simultaneously bringing Gotham gangster Joe Minette to justice. I took to the streets as Batman’s full-fledged partner in crime-fighting: Robin, the Boy Wonder.

I enjoyed my first year as Robin, regarding the job as an adventure until a confrontation with Two-Face served as a rude awakening for me. Two-Face had captured the new District Attorney and Batman, and had each suspended from a hangman’s noose in a ‘double gallows death-trap’. I, in trying to save the D.A., used a batarang to cut the rope of the noose. It worked, but I didn’t account for Dent’s obsession with the number two—it was a two-fold trap, and the floor gave way, dropping the D.A. into the water, where the man drowned. I was unable to prevent his death, and received a beating at the hands of Two-Face. A beating witnessed by Batman, still tied up on the platform trying to free himself. Eventually Batman was able to free himself and apprehend Two-Face. This event, however, scarred me, and haunts me even today. And, rather than see me be further endangered, Batman “fired” me, sidelining me for a time.
I continued my adventures with Batman, and began attending college at Hudson University. I started to take on solo missions as well, and found myself to be a capable crime-fighter in my own right. Shortly afterward, the mysterious Raven summoned me, and several other young heroes, to form a new group of Titans. I again resumed leadership, and moved out of the shadow of the Batman. When I was 17, I was shot in the shoulder by the Joker, and this scared Batman into nearly ending his career for good. I realized at that point I had grown up: I no longer relied on Batman and, in fact, I and the Dark Knight disagreed on crime-fighting methodology as Batman used torture and I didn’t like it. My newfound independence and Titans’ duties in New York left less time for my former commitments in Gotham City. I also dropped out of Hudson after only one semester.
I rediscovered my self-worth among the Teen Titans. Batman, however, was less than pleased. He informed me that if I no longer wanted to be his partner, then I would have to retire as Robin. I left Wayne Manor after this falling out. Helping me through this difficult time was my fellow Titans, including Starfire, a beautiful alien that I had fallen in love with. I handed over leadership of the Titans to Wonder Girl. 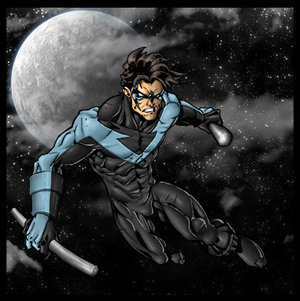 BECOMING NIGHTWING
Uncertain what to do, I turned to someone I knew would understand: Superman. Very briefly, I had considered giving up the whole crime fighting gig; but I couldn’t imagine my life any other way. But if I couldn’t be Robin, who would I be? Superman had the answer. Long ago on Krypton, a man was cast out by his family – just as I had been. He dreamed of a world ruled by justice, and set out to protect the helpless of Krypton. Having this talk with him inspired me to become Nightwing.
I had finally moved out of the shadow of the Bat, and would lead the Titans through some hard times. I endured brainwashing at the hands of Brother Blood, my relationship with Starfire would suffer due to her marriage of state, I would be deeply affected by the fact that Batman trained a new Robin (Jason Todd) only for him to be seemingly killed at the hands of the Joker.
Shortly after this, I learned that Tony Zucco, the man who killed my parents, had not actually died but rather passed into a coma. Batman feared I would want the gangster dead, so he “protected” me by telling me that Zucco was dead. After spending nearly seven years in prison with good behavior, Zucco applied for parole, in exchange for becoming a state informant of mob activity. His real intentions, however, were to retrieve a ledger containing his secrets. Just as I arrived to see him step out of the prison, he was gunned down by an enemy mobster from a helicopter. Despite catching the assassin and getting some closure to my parents’ deaths, I was upset with Bruce for lying to me and keeping me away. Bruce explained that this was not his intent.
Feeling hurt and betrayed, Bruce and I would remain at odds with each other, never fully sorting out our strained relationship. While serving with the New Titans, I was searched out by an older Tim Drake, who had only one goal on his mind, for me to return to Robin. It was my refusal to return that Tim started down the road toward becoming the new Robin. After weeks of persuading and proving his potential, I then returned to the Batman to plead Tim’s case, with help from Alfred Pennyworth. Due to our arguments and the realization that the Batman needs a Robin, Tim Drake becomes the third Boy Wonder.
Soon after, various members of the Titans were abducted by the Wildebeest Society. This event shook up the team in a big way. The group entered into tumultuous times, where members came and went, longtime friends were maimed or destroyed, although I persevered through it all, and remained the heart and center of the team.
But my relationship with Starfire became strained, and problems in Gotham demanded my attention. Impulsively, I proposed marriage to Starfire. We almost wed, but the ceremony was interrupted by Raven, now reborn as an evil avatar of her father, Trigon. Her brutal attack on Starfire triggered changes in mine and Kory’s relationship. Starfire was implanted with a demon “seed” which caused her to leave Earth and go on a spiritual journey. We grew apart, and Starfire eventually returned to her home planet of Tamaran.
GROWING OLD

I continued on as Nightwing, and even helped to get the Titans back together. But, after battles and fights, injuries got the better of me as did growing older. I went as long as I could, but had to give it all up when my body could not handle it any longer. What got to me the most was that I no longer worked alongside Bruce. That was one of the factors that would haunt me for the rest of my life, and I would always regret not trying harder to reconcile with him. He was not my father by any means, but he was a father-figure to me, as well as my best friend for so long.
But, my life is full of regrets.