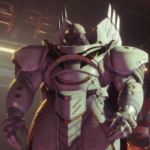 I fear none and bow to no one.

Dominus Ghaul is the self-proclaimed ruler of the Cabal Empire. After receiving the distress call sent by the Skyburners during the Taken War, Ghaul traveled to the Solar System with his Red Legion with the goal of claiming the Traveler and its Light for himself. He successfully carried out a surprise attack against the Last City, capturing The Speaker, destroying the Tower, and severing Guardians' connection to the Light by isolating the Traveler within a containment device.

Ghaul was born a runt and was abandoned at birth to die of exposure according to Cabal custom. Instead, he was found by The Consul, a disgraced scholar and aristocrat of the Praetorate, who decided to raise, befriend, trained, and teach Ghaul in the hopes that he would one day overthrow Emperor Calus.[6] In particular, the Consul taught Ghaul of the Traveler and instilled in him a belief that the Cabal deserved its power by right. Ghaul knew how the Consul was using him and accepted it as a fair exchange for his upbringing.

Ghaul first came to Calus’s attention as a new fighter in his coliseum. His striking sun-bleached white skin, combined with his singular skill and measured, patient approach to combat, quickly made him the Emperor’s favourite Gladiator. Calus would amuse himself by forcing those who had displeased him to bet against Ghaul, while he bet for him. However, Calus began to grow apprehensive of wasting Ghaul’s skill in the coliseum, and so elevated him to Primus of the Red Legion, where he became known as the “Ghost Primus.” As the Primus of the Red Legion, Ghaul quickly became indispensable to the Emperor not only for his skill in battle but also his wisdom. Ghaul soon found himself as the right hand of Calus, who would often discuss his plans and ideas with Ghaul to refine them and temper the Emperor’s passion with discipline. Ghaul grew close with the Calus as well, confiding in him how he believed the adversity he had faced throughout his life shaped and strengthened him into the warrior he became.

Despite the growing friendship between Ghaul and Calus and the close trust and faith, the Emperor favoured him with, Ghaul’s loyalties remained with the Consul and he utilized his position to began plotting a coup against the Emperor with the aid of what remained of the Praetorate and a number of Calus’ closest allies and advisers. Among the allies he gathered were Calus’ own daughter Caiatl, Evocate-General Umun’arath, Calus’ bodyguard Shayotet, and Freeborn Otzot, who feared losing her status should Calus free all Psions from slavery. Calus grew concerned about Ghaul’s activities and dispatched a spy to follow him, although he did not know the true extent of Ghaul’s plans.

Ghaul’s plans were complicated by the surviving members of the Praetorate, who sought greater control over him and tried to delay his coup for a more advantageous moment. Ghaul ignored their efforts and rejected their attempts to rule over him, and chose his own time and place to remove Calus from power. Alongside the Consul and the Red Legion, Ghaul personally invaded Calus’ palace on Torobatl in the middle of a late-night court celebration and arrested him, with the aid of Caiatl and Shayotet ensuring that Calus’ was caught off-guard and unable to resist. Under the cover of darkness, the Emperor and his remaining military supporters were marched into The Leviathan, sealed within, and exiled far into space along a pre-programmed course, as he was too popular to openly execute. Ghaul found himself unable to look into Calus’ eyes during the coup and exile, although Calus was unsure why and thought it could be due to shame.

With Calus gone, Ghaul titled himself Dominus and declared himself the leader of a new Cabal regime, where there would be no more emperors and where everyone could attain greatness if they worked hard for it. Under his direction, the Cabal militarized and became a conquering, expansionist empire, and the Praetorate regained little of the power it had held before Calus, although the Consul remained Ghaul’s advisor.[6] Ghaul eliminated much of the decadence of the Empire in favour of perfecting the Cabal into what he viewed as an ideal war-driven form.[14] Knowing that Calus remained alive and a potential threat to his rule, Ghaul took steps to hide his movements from the exiled Emperor in an effort to keep his plans secret.

Along with his efforts to hide his movements from Calus, Ghaul had also employed the use of Psions to mask his fleets from the Hive in his conquest of their War moons on the fringe of Cabal space to ensure a “buffer” against invasion.

War and conquering are the way to true order.