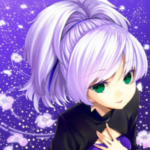 Occupation:Heir To The Rule Of Asteroid Fall

Heir To Duchess Of Asteroid Falls

Born to the unwell-known Svylia Yatsuki and the well renowned June Yatsuki, who had assisted with finishing up the efforts to recreate the world known as Earth-ACH1 into the landmass that was gifted to our family by my parents marriage

Annika grew up believing the throne would be passed to her younger sister, Zoey, however at the age of 13, June revealed that she wished for her oldest to succeed as her heir

Recently, Annika had the honor of fighting in the final battle of the Emporium War:II leading one of the many units of Asteroid Falls into combat

Although now the young lady has found herself love with a demon princess of a hell, her name being Kara

Causal:Annika normally wears a brown cloak, underneath she wears whatever she wants

Ruling:Annika wears a steampunk captain outfit for a girl, with a small flag badge of Asteroid Falls’ Flag

Fancy:Annika wears blue and white dress that was given to her by her mom [June]

Warm:Annika just wears a magenta sundress and a beach hat with sunglasses

Cold:She wears a leather jacket underneath her brown robes

Not everyone is who they appear to be, but let girls have there secrets

Beauty can be created from ashes