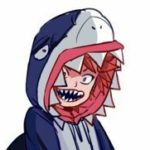 Hello There My Dear Reader. Welcome to the Profile of Uragirimono Bodo. I am only here to Introduce the Child. My Reader, Please Listen Carefully. This is the Tale of a Human. With Emotions, Feelings, Skin, Bones, and a Body. You may see it as an Intriguing Story. Filled with everything a Human like you’s Story needs. A Pinch of Drama, a Cup of Horror, a Spoon-Full of Romance, Dashes of Action, and everything you’re Hungry-For-Entertainment Mind needs. Giri is the Main Character to you’re Tale. This Child will reveal things to you. Things you Wished you never knew. Things you Wished you knew a long Time ago. One thing She loved was the Blindness of Humans. How Humans can both be too Distracted by their own Imagination to see the Reality slapping them to Open their Eyes. Or how some Humans are too focused on Reality and Life to see the Imagination they have Locked away. You will soon get this Complicated Speech I have given You. It indeed it Killing me to not Tell the Tale Myself but the Liver must do this Job. From her own Lips and Mouth, her own Teeth and Tongue. I will soon be revealed. Maybe. But every Story has it’s Good to Bad Parts. Allies to Enemies, Sunshine to Rain. Now Listen Reader. Be cautious on the Path you walk on as you Step in this Story. Goodbye My Reader. And Thank You for Opening those Sealed Eyes of yours.

"Hello My Dear. And Thank You (!@#$%^&*) for the Intriguing Start. I am Uragirimono Bodo. Yes Reader, This is indeed a Strange Name for Me and May Sound Off But This is The Name that I was Blessed With. My First Name is the Japanese word for "Traitor" while My Last Name is Japanese for "Riot". Most Former friends of Mine just Call me "Giri" for Short Due to My Long Name."

"I do have Indeed Romantic Interest. Even as a Child like Me, My Love Interest tend to Hang On Older Men. I am not as Weird as You Reader Suppose. I just like the Sense of Protection they tend to have. A Security feeling is something I never had through My Ages."

"At the Moment, I am Free. I do Wish for a Lover but I would not like the Sorrow Feeling of Commitment Now. But an Allie would seem more Suitable."

“As (!@#$%^&*) had said Before, No one knows the Story unlike the Main Character. And I do Believe That Some People are to Blind from Reality or Fantasy to see the Other. I was Born on April 20th, 2005 in Japan. In my World, Japan and America had came together and Now I live in San Bow Tokyo. In a World where around 90% of the Population in the World has a Special Power, Mutation, or Ability. These are Called “Quirks”. I was indeed Born with one of These Quirks. All these Quirks have Names for What They are. Mine is called “Hardening”. The reason for this is I have the Ability to Turn my Skin into an Almost-Rock-Like Texture. My Skin Does Stay the same Colour But it Becomes Hard and Tough. This is Useful in many Battles since I am Used to Offense Positions and I can also be a Human Shield. These Quirks mainly Appear in a Child from 3-5. I had Got Mine at 3. My Quirk was from My Dad. My Mom was hardly in My Life and I am Glad. She was a Sick Human Being, I’m not sure if she is Even Human. I has Two Younger Brothers. One was Named “Ushinawareta” but I used to Call Him “Shina” for short. His Name is Translated from Japanese and Means “Lost”, while my Other Brothers Name was “Mitsukatta” or “Mitsu” for Short and Means “Found”. At the Age of Nine while My Dad was Helping me Practice My Quirk, She had Took Them Away. I heard My Dad call her sometime Later and Some Words were Glued to Me “I Never Wanted Her! These ones will be Better!” My Dad argued that she didn’t Mean it over the Years but I Knew She Did. Calling Him only to Remind him what a Disappointment I was. Only Because I inherited my Dad’s Quirk and not hers. My Brother Shina has inherit my Mothers which was Copy. To Touch Someone and Use a Copy of their Quirk for a Limited time, The Time Limit grows over the Ages. Mitsu had Got Our Grandmothers, Who was an Amazing Human Being. Her Quirk was Creation. Allowing the User to Create Objects from their own Skin Based on What Mass They have Eaten. My Mom hated My Quirk and Always Tried to Persuade My Dad to Leave Me But He Never Did. I grew Up with Close Friends Until My Dad was Killed. One Night He was Murder by the City’s Pro Hero. All Might. He had gone Insane and Killed My Dad for Unknown Mental Issues. Him and My Dad were the Best of Friends. That Night I Ran To my Dads Room and Saw Him. I cried and Cried but All he did was place his Bloody Hand on My Cheek and Said To Me, “Don’t.. Let Any.. Bitch… Tell You.. What Path to.. Cross or Stop… Please Baby… My Only.. Little Riot…” I Never Forgot Something Like That. I ran Away from Home But Soon Returned after the Issue was Forgotten, and Everyone Assumed All Might Killed Me and Took My Body. I found My Dad Journals I used to read with him about his Life Before Having a Family. I read the One Book he told me to Never Read. I Prayed I’m Sorry and Read. Villain. The Bodo Family Name was in link with Ancient Villain League. And He Never Told Me. I always Thought My Dad would Kill Me if I were a Villain but in the Journal, In his own Words, He wrote, “I Wish Giri Could see the World from their Side. My Girl will Maybe One Day, I Hope. This Damn World Needs an Eye-Opener.” I Read More and There was a Letter for Me. I Opened It and It Read An Address and a “Thank You” From My Dad. I knew I had to Do This. So I went to the Address and After sometime, Met Other Kids Like Me. Children to Parents Helping Heroes but are Villians. There was “Dabi”, “Tomura Shigaraki”, “Twice”, “Overhaul”, “Toga Himiko” and One Adult Named “Kurogiri”. Dabi used This Fake Name to Not Reveal Himself and His Quirk was Blue Flames. Shigaraki was quite amazing. He had Decay. Where he can Disintegrate anything He Can Touch. Twice can Make Real Copies of People or Things. Overhaul can move a Person’s Body Parts Around While Toga can Drink the Blood of Someone and Turn Into Them. I enjoyed Getting to Know Them and Kurogiri was Just Like My Dad. He and My Dad were closer than My Dad with All Might. Kurogiri was just a Purple Wither Portal. We could go Anywhere Since He could Make Portals from his Dark Mist-Like Skin. He Helped Us all Practice our Quirks and I am Slowly Learning to Cope With My Own Quirk. Me, Shigaraki, and Overhaul were the only Ones with Dead Parents or Dead Parent. Twice and Dabi broke out of a Juvenile Prison while Toga Ran Away from Her Drugged and Abusive Parents. And I had a Small Crush on Shigaraki and I knew he felt the same way for me after Some Information With Kurogiri, Since I tend to Have a Seducing Personality. Kurogiri was Extremely Old And Knew Even Our Great-Great GrandParents. I am Now Only Slowly Processing Everything but Villians have a Lot more Damn Fun then The Heroes.”

“Appearance wise I am Sorta Normal. I have Red Hair That Flurrs Up in the Front but Falls down in the Back. My Skin is a grey-creme Colour And My Eyes are The Same Colour as My Hair. My Hair runs down All the Way to My Waist. I have a Very Skinny Body with a Height of 5’2 and Weight of 112.6 or Near that. One outfit I have is a Grey-ish Large Shirt Two Sizes too Big. With Fitting Black Boy Shorts, Almost Like Boys’ Basketball Shorts, that run to My High Thigh Area. I also Have Large Dark Brown Boots stained in Mud and Old Blood. My Boots have these Buckles That Make a Clunking Noise Some Times When I walk. The Boots are Extremely Thick and Are a Size Nine’na Half in Women when I’m a Size 8 Currently. My Shorts are Black With Two Small Tears On The Front of my Right Thigh and on the Outward side of My Left Thigh. My Shirt Goes up Half way to My Shorts and is a U-Top and at times run off one of my Shoulders. I also have a Dirty Gary-White Jacket That was My Dads. I try my Best to Keep It Clean but My Cleaning Habits are Horrible. But sometimes I wear a Shark Onesie Because I love Sharks! I have Very Sharp Teeth as well. I always Carry My Dads old Side Bag. It was an Almost-Lighter-Tone of Black and I never Lost It. I Also Have Bandages on My Left Cheek, Right Shoulder and Arm, Left Leg with Two, and One More on My Upper Back.” 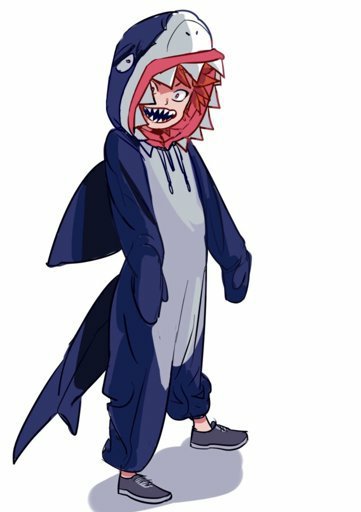 “In My Dads Side Bag I Carry His Old Pocket Knife, My Phone, Matches, Phone Charger, My Wallet, Headphones, and Bandages with a First Aid Mini-Kit. My Dad Always Said to Never Mess with his Pocket Knife But I have a Feeling now is an exception. My Phone has a Gray Case and One Small crack from Twice. I filled My Phone Case Cover with Two Small Photos of Me and My Brothers. And One of My Dad and Me at His Birthday Surprise With My Grandfather On-His-Side. Also Some Small Pictures of Me with Toga, Dabi, Shigaraki, Twice, Overhaul, and Kurogiri. In My Wallet, I am Currently Carrying 76 dollars and More Photos or My Dad and Friends. My Headphones are Really Just small Earbuds and the First Aid Case Has Only a Couple Bandages, Rubbing Alcohol, Cleaning Mini-Wipes and Cotton.”

“Everyone has their Secrets. But You are Dead Wrong if You Think you can get a Hold of Mine. Secrets are Secrets. Whether you Choose to Share them or Not. I have My Secrets told to Some People. Just one of the Good Things about Getting to know Someone. Revealing Secrets is more than just an OMG Moment. The Meaning of Secrets is like Trusting to Have Someone Hold a Fragile Glass Bottle. Hoping They won’t Break It Into Sad Pieces.”

"Blood is Blood. You can't Not Take Pride or Remorse for a Murder or Crime. Death is Death as Much as Life is Life. It can Easily Be Taken and Made. My Father didn't Deserve his Death but God made that his Plan."