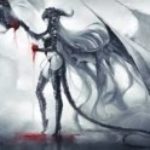 Spectra is known as the Dragon Lady because she can be quite ferocious and stuborn, as well as, she rules an island home to thousands of dragons, Paramythia. Paramythia is home to dragons that have been forced from their territory or have been rescued from trappers. The island is protected by a force field that disguises the island as a large, but minor, tropical storm. The force field also acts as a barrier, preventing any non dragonic creature or vessel to enter unless escorted by Spectra herself or Kyran, her second in command. Anything that does try to enter without an escort is spelled to turn away and forget what they saw.

Spectra’s real name is Xenriane, Spectra is the name given to her by the dragons.

Spectra speaks a second language that is native to the dragons that reside in Paramythia, draconic. (¨~¨ are used when speaking in her second language, for example “~fly~”, or simply draconic).

The spawn of a dragon and a demon general.

Born nearly 2,000 years ago to a dragon and a high ranking demon General, Ar’ak, it was always expected of Spectra to take her mother’s place as general. She spent several hundred years training under her mother’s teaching before finally fighting alongside her.

One day while exploring the overworld Spectra came across a young, wounded dragon who begged for her help to save the rest of its weyr. Before she could answer the dragon scampered off, and Spectra’s gut told her to follow. The young dragon lead her to where the rest of its weyr was being held at a trapper camp. Spectra worked with the young dragon to free the rest of its weyr. Once the dragons were free the leader of the weyr, who just so happened to be Kyran, vowed his loyalty to her for the rest of his life. Kyran then took Spectra for a long flight, showing her all the dragons injured and dying in trapper camps. Spectra wanted to save them all and give them sanctuary, but she had no where to do so. She began the hunt for the perfect dragon sanctuary with Kyran by her side. Together they eventually found the perfect place in the middle of the sea. The perfect place with one problem, Delgry, a skeletal dragon that had lived on the island for eons. Spectra told him why she needed the island and tried to reason with him, but he wouldn’t budge. Delgry ended up telling her that the only way she could get the island was to defeat him in battle, no magic.

Faced with the toughest challenge she had ever faced, she accepted, determined to win the perfect island for dragons everywhere that had been wronged. After days of fighting Spectra was exhausted and could barely hold her sword, she had been defeated. After seeing how valiantly Spectra had fought, Delgry decided to hand over the island, on the condition that he would be allowed to stay. To this day Delgry remains on Paramythia, now guarding the burial island.

Over the years as Paramythia grew, Spectra started returning to the demon world less and less. Her mother became discordant, believing Spectra should stay with her and continuing her training to become a demon general. Spectra refused, having found love for the dragons she protected. Ar’ak became infuriated, sending demons to attack Paramythia. At the end of the first battle Spectra rose victorious. Year after year Ar’ak sent squad after squad to destroy the island, each time the squads returning with less and less demons. Ar’ak had taught her daughter well. In a final attempt to destroy Paramythia, Ar’ak sent every demon warrior she had in her army. It was finally to much for Spectra and the dragons that fought with her to handle on their own, so she and Kyran headed for a powerful kingdom to ask for aid, the kingdom of Lustiria.

Once they had arrived at Lustiria and found the kingdom’s ruler, King Daniel McKnight, Spectra asked for his aid protecting Paramythia. King Daniel then asked what he would have to show the dragons wouldn’t then be turned on his kingdom. They quickly came to the agreement that Spectra would marry him, bare his children, and join half her forces with his legion in exchange for his aid and some of his troops being stationed in Paramythia. After the agreement was struck Spectra sent Kyran back to Paramythia to fetch transport for King Daniels troops, while she stayed in Lustiria so she and the king could wed along with start trying for a child. Once Kyran returned with transport the dragons and platforms they carried were loaded up with men and supplies to build a fortress. 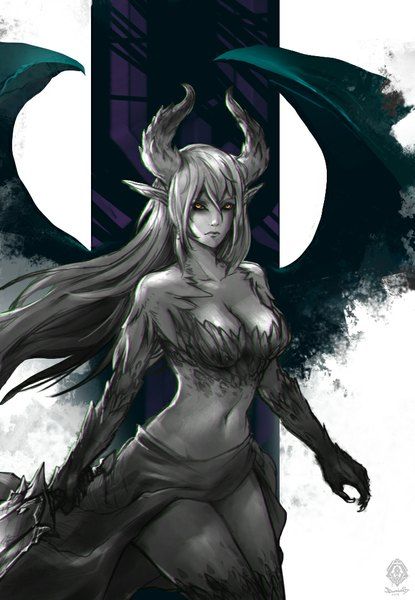 Spectra doesn’t carry much, except for a dagger she stole from her father before he left.