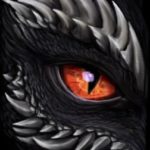 Ilta rammed her tiny black snout against the egg, Shifting her fragile wings uncomfortably. Her beautiful, Deep black scales shining with chalazae. The slime making it all the harder to burst out of the egg. She squawked, Her grunt of annoyance and frustration muffled by the walls of the enclosure.

She managed to slide her fore legs against the wall. She screeched meekly and clawed frantically at the shell. A crack as she was freed from her prison.

She poked the start of her nose out of the small crack and gritted her sharp teeth. Pushing forward, She yelped as she rolled out of the egg. Blinking her slitted amber eyes.

She tilted her head from side to side, Her wings stretching. Relief flooding through her. Her muscles loosened as she was free from the tight hugging of the egg.

The small mangled figures of her sibling lay, In their crushed, Blood and flesh covered remains of their eggs. She sprang to her feet with a horrified yelp. She stared wide-eyed at her fallen guardians and swung her gaze back to her limp, Strangled siblings.

Their necks twisted in horrible, Unnatural ways. Wings ripped apart and broken. Bones jutting out from the scales and muscle.

How must a dragon survive with out a mother? Nor a father?

Ah, So the story begins.

She is straight. And though she is dragon herself, She'll take interest in any race.

So, Now that the Tragic Part is over with. Although, I can’t exactly say I..Miss them? In my defense, I never knew them. Hard to miss someone ya never knew.

My memories a bit foggy, I was a little hatchling at the time after all. If you want to get whiny, Try being 20 and telling your baby memories. I had to have help from my “Substitute Guardian,” Gristiel for the egg part. Plus, Alot of dragons I grew up with remember their hatching. It’s a nice memory..Sometimes. Most times. So ha, You can’t blame me. Anyways, Again, To the story. Hold on. Let me get Gristiel.

Gristiel leaned down, Shaking his head in disgust at the sad, sad scene before him. Poor, Poor me.. He picked up the shaking lump, Me. Obviously. Who let out a feeble squeak of terror and shock. He applied as less pressure as possible as he carried me in his jaws. He swiped a talon gently over my head. In hopes of calming me, Letting me know I was safe with him..

-Years Later. Age 6-
Delighted laughter exploded from me, As I ran. On two legs. Ah, Yes. Grestiel here helped me learn my hybrid, Human side. I’ll explain the appearance later.

Thunderous steps hurried after me, My wings beat forward. Wind rushing, Colliding with opposite blowing winds. I took one step forward and leapt into the air. Closing my amber, Reptilian eyes. Spreading out my arms. My wings bringing me higher and ahead. “Ilta, Get back here! You know you can’t go into those borders.” A growl of frustration and demand echoed, Flowing through the wind into my ears. I shuddered as I heard the twinge of fear and nervousness in his shout. I opened my eyes and looked below me. Inhaling the sharp, scent. My wings spread out abruptly. And smacked against the battling breeze, Sending me flailing backward. I released a shout of embarrassment and pain as I hit the ground, The deep blue dragon looking down at me disapprovingly.

My voice is getting tired.. Can I continue later? No? Ugh.. Fine.

-A slight grind as gears shift and the recording continues.-

I’m skipping a few peaceful years and reaching where my life went downhill. Period. I’m agreeing to this for Greciel. He’s been tight on money. I swear One more peep outta ya, “No, No..Full story. Blah, Blah, Blah.” And I’ll rip your throat out ya got that? Hmm? Yes? Good.

I ran faster, The bangs of huge bodies twisting, And clawing each other echoing through out the silent forest.and huge clouds of dirt visible in the sky. I panted, As I watched Greciel wrestle and bite ferociously at a burly green dragon. Blood flinging from the two, Growls and insults through. Taunts. Cries of pain. Greciel lifted two talons, And flapped his wings twice, While thumping his tail against the ground. Our signal. I bit into the flesh of my lip, Blood curling on my tongue. I shook my head, “No!..I can’t leave you to die.” Blah, Blah. I refused until he roared,”Now!” It kinda spooked me at the time. And I only left because I couldn’t stand the look on his face. He wanted me to leave so bad. So I turned. I beat my self down for leaving. Thinking I left him for dead. I went through rough times. Alone on the streets of a village I over came. Frail, Starved. Bloody and beat, Tired. I didn’t think twice as a smirking man looked me over.

-Static, Then a loud whack as somebody smacks the recorder roughly, A click. And a female voice continuing.-

..And took me into his care. At least that’s what he made it sound like. I was used for him and his friends..Entertainment. Angry? Beaten to a defenseless bloody pulp. Lustful? Their little sex toy.

-A cough and sneer of disgust from the speaking woman.-

And so on. Then, I spent my very few amounts of free time regaining my strength. Fighting. Learning. Teaching my self.

-A soft chuckle of satisfaction from the speaker.-

Then they were the ones beaten to a bloody pulp. And I grew up, Age 19 me and Greciel found each other and reunited. There. I told my story. Satisfied? Nope, I don’t care for your answer. I am DONE. Have a nice day.

-Twinge of sarcasm, And a yawn.-

Now, Unless you want this to be your last sight. I shall be leaving.

-A loud slam and a click as the woman slammed a finger against the,’ Stop Recording, ‘ Button. And a small whir as gears shifted, Slowly coming to a stop. Voices cut off.-

-Dragon Form-
A tall, Majestic creature with scales of a gleaming black. And sharp, reptile amber eyes. A long tail, Curved at the end. Scales jutting along the “Spine of the tail.” Curved horns, And spikes along the jaw. Scales forming over each other at the brows. Large wings, A faint purple-gray of leathery material binds the wings, Which curled uniquely at the ends.

-Human Form-
Pale, WhitePale silver like skin. Long black hair. And a usual black dress. That looks as though it’s made of feathers and leathery soft scales. Slender fingers and wings, Like her dragon ones. The same tail as well. The same sharp amber eyes. And small horns curling from beneath her hair. Her skin turning into black scales at the ends of her arms, Still fingers though, Just claws instead of nails. A speckled of scales surrounding the ends of her wings and shoulder blades. Lining her spine.