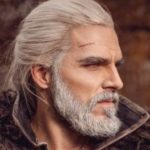 Drauf was born around the year 750 in Scandinavia, but he never knew his parents. Left out in the forest to die, he was taken in by a pack of wolves and and raised in the wild for several years. He would found and captured, but it took a squad of elite hunters to bring him down. From there he was raised as a slave and forced to hard labor until he was saved by a band of vikings who raided the village he was enslaved in. Joining with them he made a name for himself as he learned and adjusted to life with people.

By the time he reached 23, based on the age they thought he was when captured and could be off a year or two, he had already proven his place within the village he now called home and had made a name for himself as a fearsome warrior. Everything was going great for him, but he couldn’t stay put for too long and after gaining the blessing of the town elders he packed his things and headed out.

He has traveled the land ever since, and used to return to his home every so often to check in, but stopped once the people he one knew and cared for had started to grow old and pass on. Not being able to handle it he hasn’t returned and was probably forgotten completely.

A tall athletic man with grey hair. When he grows his beard out it is a grey color too although his appearance that of someone in their late twenties to early thirties.