My real story begins in 1789, the beginning of the French Revolution. The political upheaval put the nation in turmoil. War begun. Riots, poverty, worse than it already was, and an ever growing conflict that would effect surrounding countries. This didn’t matter, not… particularly.

I was in it, sure. A major part? By no means. I was just another man who wasn’t in a uniform, taking up arms against the political figureheads.

I was there, the beginning of it all. I was there when we all flew the flags and marched on. In the eighteenth century, death was just another person that you didn’t have to feed.

I was another one of those people. I was killed, but it wasn’t by gun shot or bayonet. No… Someone killed me, their teeth sinking into my throat.

I could barely remember who it was, it was dark, and we were trying to stay alive. I was walking along the alley, behind the barricade when I was jumped. I was rendered weak and useless against this man who had the strength of a thousand men.

How did it come to this?

My vision faded…
My body went cold…
I could feel the blood leaving my body.

What on earth was happening?

When I came back, it was dark, and wet. The sounds of the water dripping gave way to the fact that I was in the sewers of France.

But, the sounds were so loud when, I have been in the sewers before, and I never heard so much noise. And the smell! It was horrid!

So, I covered my nose, and focused. My vision became clear, and where there was a sound, I could almost see it perfectly clear.

Time went on…
I’ve learned I could do things. Particular things that wouldn’t be of a normal “human.”

I learned I could be out in the day, it burned, but, it was bearable. I had to make these glasses, to help my eyes, and that took away the pain.

I could heal in the shadows during daylight if I was injured.

When I drank, I got this boost of power, not just a ‘reviving’ thing, but I was stronger, and anything that tried to attack me didn’t do anything. Eventually it would wear down, but, it was… interesting to find out in a pub.

And when I say time went on… I mean years… decades… and then centuries.

Until now… where cars and motorcycles flew by, planes in the air. France was back to its glory, and the people were prosperous. I watched with caution as the first World War went by. And then, the second. Vietnam, The Cold War, the wars in the sandbox….

All with careful and particular caution I watched from afar, never getting involved. I didn’t need anyone seeing what I could do, what I was. A complete monster.

That’s what I am… 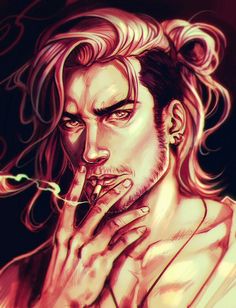 Not much… just the clothes on my back.

…Hail is the coldest grain;
Christ created the world of old.

Nothing good can come of this.