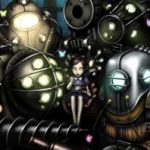 The Protectors of Rapture

The Protectors of Rapture

A group of several big daddies

Some of us are gay or straight or bi sexual

We're all bonded with a single little sister

he, a lumbering palooka in a foul-smelling diving suit…ANDREW RYAN

Big Daddies (originally named Protectors, and occasionally referred to as Mister Bubbles, or Mister B, by Little Sisters and ‘Metal Daddies’ by Splicers) are genetically enhanced human beings who have had their skin and organs grafted into an enormous diving suit, with Alpha Series being an apparent exception to the grafting process, though still heavily spliced. Their primary purpose is to protect Little Sisters while they escort them around Rapture. If all of the Little Sisters have been either harvested or saved in a level, Big Daddies will wander to a vent like usual and bang on it. However, a Little Sister will not come out, causing the Big Daddy to groan in frustration and bang again before letting out a sad moan and walk away in an attempt to find another Little Sister.

Aside from the Alpha Series, Big Daddies communicate by uttering haunting sounds similar to that of whale calls. Alpha Series communicate with low, inhuman grunts and roars. For easier interpretation (as stated in the Deco Devolution art book), production model Big Daddies have a bioluminescent chemical substance which filled the helmet, displaying its state of emotion or mind. The Big Daddy has three different colors he will display.

The surviving Alpha Series from BioShock 2 are in a permanent state of wrath due to prolonged separation from their Little Sisters. This excludes subjects Delta and Sigma owing to their unique circumstances. 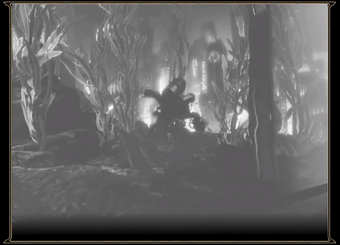 A Big Daddy digs into the foundation of Rapture.

Big Daddies were originally created by Dr. Yi Suchong to serve as Rapture’s maintenance workers, to help in later construction projects, and to do the menial work of Rapture that was not profitable;[1] Rosies riveted panels and windows, while Bouncers drilled deep-sea rocks for expansion of the city.[2]

As the demand for ADAM increased and could not be met from the method used with the available Little Sisters, Suchong proposed the idea of recycling the raw genetic material directly from the corpses of dead Splicers, instead of exclusively producing it with Little Sisters in their laboratories. With the genetically-modified girls at great risk when out on the streets gathering ADAM on their own,[3] the “Protector Program” was initiated to bond them to the hulking Big Daddies, turning the latter into Protectors who would respond aggressively to any threat encountered by the Gatherers. Suchong suggested this idea to Andrew Ryan, knowing that becoming a Big Daddy was a “one-way street”, but he fretted about being able to find suitable candidates. Ryan gave assurances that it would not be a problem.[4] Although the true identities of the candidates were unknown, many were exiled criminals, the criminally insane, and political dissidents imprisoned in Persephone, which was under the management of Sinclair Solutions. Augustus Sinclair had already been contracting prisoners out to Fontaine, and later to Ryan Industries, for test subjects in the research labs of Point Prometheus and at Fontaine Futuristics. Candidates from The Rapture Family in the prison were selected by Dr. Sofia Lamb, imprisoned at Persephone herself at that time, and acting as a psychiatrist for the inmates to curry favor, sending members of her own following for conversion.[5]

Experiments were conducted by Dr. Gilbert Alexander in the research laboratories of Fontaine Futuristics. The first protector prototypes bonded to Little Sisters were called the Alpha Series, previous Plasmid test subject from Sinclair Solutions. Alexander took inspiration from a common nickname for the Protector Program candidates, “Big Daddies”, and engineered a conditioned bond between the Protectors and their charges which would mimic, through mental and physical restraints, the emotional bond between a father and his daughter, the “Pair Bond.”[6] This bond ensured that the Protectors would guard their charges at all times, and not wander away from the girls, otherwise they would slip into a coma. After many unsuccessful attempts, the first candidate from the “Protector Program” to be successfully Pair Bonded was Subject Delta, a deep sea diver formerly known as “Johnny Topside” who had discovered and entered the city by accident. In a short time, the Alpha Series failed to be practical as Protectors. They only protected a single specific Little Sister, and if they were lost to Splicers or rescued by Dr. Brigid Tenenbaum, that rendered the Protectors useless, sending them into a coma or making them suicidally aggressive, and even after being reprogrammed, they were only usable as mere foot soldiers. With these unsuccessful results, the Alpha Series was ended. The remaining Alpha models were deactivated and in the following years kept in holding at Fontaine Futuristics, Minerva’s Den, and Persephone. 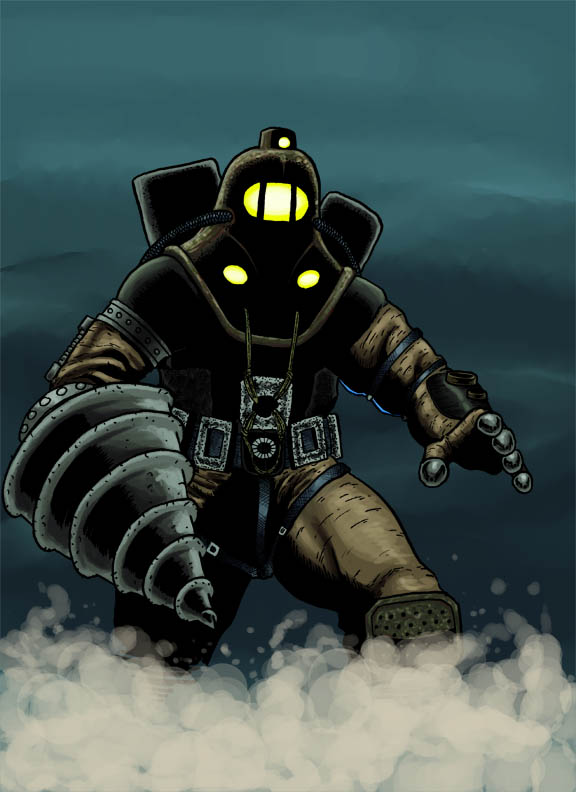 The Alpha Series were the first prototypes of a failed line of Protectors developed by Dr. Yi Suchong. The line was created by Dr. Alexander using prisoners from Persephone Penal Colony as test subjects. Each member of the Alpha Series began as a test subject for various Fontaine Futuristics Plasmids, and they retain some Plasmid abilities as a result. The bodies of the Alpha Series were less drastically modified than the later models when placed inside their suits and they, unlike later Big Daddies, did not have their skin and organs permanently grafted to their diving suits, allowing them to, for example, remove their helmets. Functioning Alpha Series such as Subject Delta were still heavily spliced, granting them greater strength and stature than most citizens.

This bond proved to be too effective, as each Big Daddy in the Alpha Series became essentially useless if their Little Sister died from having her Sea Slug harvested by Splicers or saved by Brigid Tenenbaum‘s antidote plasmid. Any Alpha Series model that was not rendered comatose as a result of his Sister being lost descended into emotional instability to the point of psychosis (Gilbert Alexander recalls seeing one Alpha Series crying at a Gatherer’s Garden in mourning for his Little Sister in one of his audio diaries). The Plasmids and Tonics the candidates were exposed to destabilized them further, as rips in the armor of Alpha Series encountered in Fontaine Futuristics reveal their skin as lumpy and grotesque. The remaining prototypes employed by Sofia Lamb and Reed Wahl were only useful as foot soldiers, as their suicidal aggression made them unfit for anything else.[1] 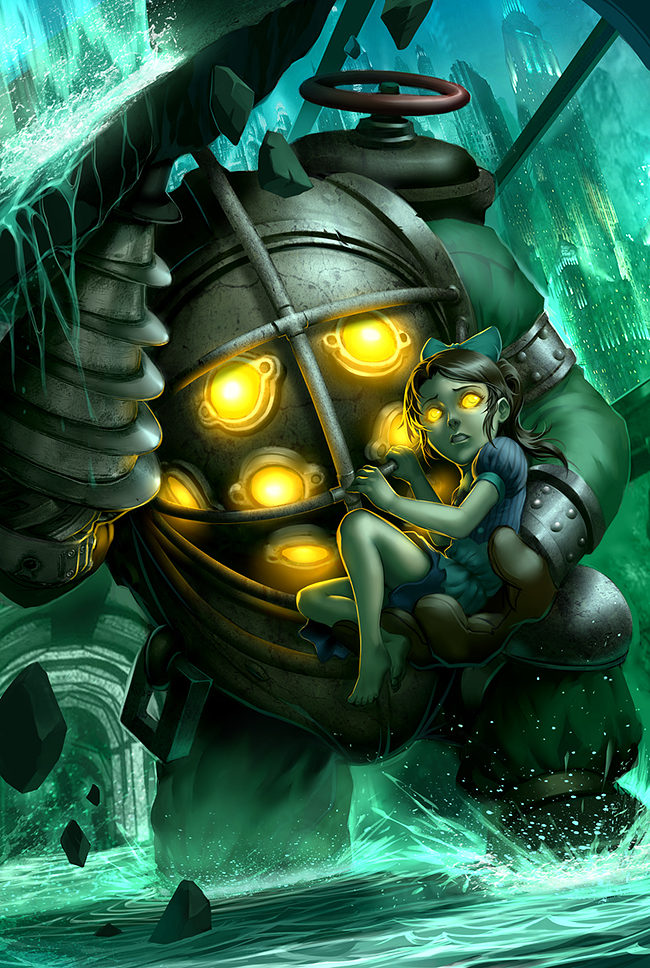 The Bouncer is one of the five functional types of Big Daddies, along with the Rosie, Rumbler, Alpha Series, and Lancer. Bouncers are more agile than Rosies, but are entirely ineffective in ranged combat. The Bouncer’s main weapon is an oversized Drill (and in the case of the Elite Bouncer a spinning harpoon) attached to his right arm and powered by the internal combustion engine on his back. They generally attack using powerful blows at close range, with a fast charge being their only offensive long range ability. The Bouncer, along with the Rosie, are the only Big Daddies to have an Elite form. 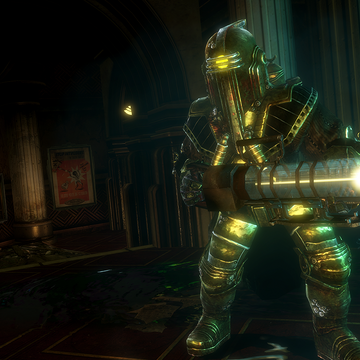 Lancers have a much more stylized appearance than their brethren, their armor resembling a cross between Art Deco (the helmet is designed to resemble a Rapturian skyscraper) and the knights of the Middle Ages. Lancers have a cape attached to their upper torso, and save for a few clusters of barnacles their armor is in near-pristine condition. A gyroscope-like object serves as the valve on their oxygen tank, rather than the typical metal wheel.

The Rosie is one of the five functional types of Big Daddies in Rapture, along with the Bouncer, the Rumbler, the Alpha Series, and the Lancer. Along with being assigned to protect Little Sisters, Rosies are also the supplementary mechanics and maintenance workers of Rapture. Their main weapon is a giant Rivet Gun. They are taller and slower moving than the Bouncer, making them less agile, but their long-range gun makes them just as dangerous.

The Rumbler was developed by Gilbert Alexander after the events of the original BioShock. Due to Splicers getting stronger, and mastering the ability to take down the traditional Big Daddies (usually by swarming over them in large numbers), a new Big Daddy model was required to protect a new line of Little Sisters. This required it had to be more powerful than regular Big Daddies, capable of dealing with several enemies at once. The end result of this was the Rumbler. 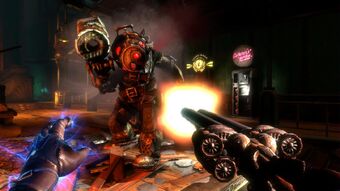 A hostile Rumbler in battle with the player.

The Rumbler is noted to be somewhat thinner in appearance than the Bouncer, and it resembles the Rosie, having less external armor and a more humanoid appearance. The helmet of the Rumbler has six portholes, two in front (one slightly larger than the other) and four on the sides. It wears an armored diving suit with multiple buckles latching the shoulder-mounted Grenade Launcher in place. The Rumbler’s shoulder-mounted RPG cannon looks like a Grenade Launcher with the back end sawed off. It appears to fire it by pulling a hinge held in its right hand, occasionally letting go to throw Turrets. It uses its left hand to punch the player at melee range. Rumblers appear in Siren Alley and Fontaine Futuristics. Before then, a Rumbler is seen inside a building when walking on the seabed outside of the Adonis Luxury Resort, defending its Little Sister from a group of Splicers.

The Rumbler appears to be almost cobbled together, such as using ropes to hold on the bracer-like plates on its arm or its cannon, which appears to be a modified wooden barrel

Big Daddies have a bioluminescent chemical substance which filled the helmet, displaying its state of emotion or mind. The Big Daddy has three different colors he will display.