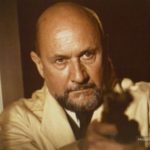 In November 1963, Loomis, a psychiatrist at the Smith’s Grove sanitarium, receives the six-year-old Michael Audrey Myers under his care. For an initial six-month-period, Loomis is charged with spending four hours each day in therapy sessions with his patient. The mute and emotionless boy had murdered his 15-year-old sister Judith on Halloween night. Loomis is determined to find out what would cause a boy his age to commit such deadly violence. He soon becomes convinced that the boy is not insane, but evil.

On May 1, 1964, Loomis meets with two superior doctors in the sanitarium’s forum chamber. Loomis suggests that his patient be confined in a maximum-security ward located at Litchfield, Illinois. The two doctors brush off Loomis’ request declaring that Michael was merely “a catatonic” exhibiting “comatose behavior” who does not react to any of his surroundings. Loomis insists that his patient’s blank behavior is an ingenious cover for his true nature. He also feels that the level of security at Smith’s Grove is insufficient. He pleads that Michael be moved immediately to a maximum security facility and preclude him any future opportunity for legalized freedom. The Smith’s Grove superiors decline the doctor’s requests and issue an ultimatum that Loomis keep Michael as his patient or he will be looked after by someone else. Loomis knows that no one else can be trusted or even safe around Michael, so he agrees.

For the first eight years of Michael’s psychiatric care and treatment, Loomis tries to get any form of response out of him. When that fails, he spends the following seven years trying to keep Michael incarcerated.

Michael turns 21 on October 19. By law, he is to be presented to court on his birthday for trial, with the final verdict determining his freedom or further confinement. The trial date is pushed two weeks into the first week of November.

On the rainy night of Monday October 30, 1978, Loomis is accompanied by his friend and medical assistant Nurse Marion Chambers; they are charged with transferring Michael back to his home county for the trial. Loomis reveals to Marion that Thorazine will be used before Michael is presented to the judge. When the pair reach the gates of the sanitarium, they discover that many patients are wandering around the grounds. Loomis goes to the main gate to telephone the hospital, but Michael appears and nearly attacks Marion while she is waiting in the car. Myers escapes from the Illinois state hospital, hijacking the car meant for his court date transfer. Driving the 150 miles (241 km) to his destination, he arrives in Haddonfield in time for Halloween.

Loomis is on Michael’s trail for the entire date of October 31. While en route to Haddonfield, Loomis stops along a rural highway in west central Illinois to call Haddonfield authorities. He has every reason to believe Michael will return home, so he urges that the police watch out for him. When he finally arrives in Michael’s hometown, he seeks the help of Haddonfield Memorial Cemetery’s grave keeper, a man in his sixties named Taylor. The pair discover that the headstone of Judith Myers had been dug up and is missing. This clue is enough to assure Loomis that his patient is in the city. That afternoon, Loomis enlists the help of Haddonfield’s sheriff, Leigh Brackett. The pair later travel to the former Myers residence at 45 Lampkin Lane. Loomis is curious to know if Michael had returned to his childhood home. With the front door being broken into and the decaying carcass of a stray dog being indoors, these two clues reassure Loomis that Michael has indeed come home. Loomis tries convincing Sheriff Brackett that Michael is a human incarnation of pure evil, that he has returned to kill again, and that Haddonfield is not safe on this night until Michael is captured.

While Michael stalks Laurie Strode and her friends, Loomis waits and watches over the house, believing that Michael will return to his home. When he discovers the stolen car, he begins combing the streets where he finds the two children that Laurie was babysitting running frantically from a house. Loomis investigates and sees Michael attacking Laurie. When she pulls Michael’s mask off, he stops to re-apply it, giving Loomis the opportunity to shoot him six times, knocking him to and off the balcony of the two-story house. After agreeing with Laurie that Michael was “the boogeyman”, Loomis walks over to the balcony and looks down in horror to see that Michael is gone.
Picking up directly where the first film leaves off, the sequel continues with Laurie being taken to Haddonfield Memorial Hospital while Brackett accompanies Loomis in his search for Michael. Myers then heads to the hospital to kill Laurie, leaving several bodies in his wake. The governor of Illinois orders Loomis to leave Haddonfield so as to not create panic. Chambers arrives to convince Loomis to leave Haddonfield. She also reveals to that Michael Myers and Laurie Strode are brother and sister. After hearing this, Loomis hijacks the police car that is taking him away from Haddonfield and arrives at the hospital to stop Michael.

Loomis races to Laurie’s aid and, once again, shoots Michael several times; once again, this does not stop him. Loomis and Laurie run to a nearby operating room where Loomis attempts to shoot Michael in the head. Loomis fires an empty chamber, and Michael stabs him in his stomach. Loomis recovers, however, and he and Laurie fill the room with oxygen and ether. As Laurie runs away, Loomis stays behind. He tells Michael that “it’s time” and proceeds to blow them both up.

Upon the movie’s end, it appears as if both Michael and Loomis had died with Laurie and the other people of Haddonfield possibly finding safety. This film was supposed to be the end of the franchise, but the ending of Halloween II is later retconned in the later sequels as a less destructive explosion.

In 1980, Laurie Strode had a daughter named Jamie Lloyd. Shortly afterwards, Laurie supposedly died in a car crash. On October 30, 1988, Myers, who had been in a coma for 10 years, awakens in an ambulance when he hears that he has a niece. Coming upon the carnage resulting from a crash, Loomis unsuccessfully attempts to alert the police that Michael is now free. He then makes his way back to Haddonfield and Loomis once again pursues him. Arriving at a filling station, Loomis sees Michael and attempts to reason with him, offering himself to Michael as another victim and pleading with Michael to leave the Haddonfield citizens alone, but he quickly realizes that Michael is too violent and insane to listen to reason. He tries to shoot him, but Michael then disappears, and Loomis realizes that he was only seeing things. Loomis then sees Michael drive away in the attendant’s massive tow-truck, scraping and igniting a gas tank and causing it to explode and destroy Loomis’s car, while Loomis himself barely survives by diving behind a pile of barrels. He eventually manages to hitch a ride to Haddonfield, where he manages to convince the police that Michael has indeed returned.
While Michael slaughters many officers in the police station, a group emerges from a local bar, and they quickly form a lynch mob when Loomis, seeing no other defense for the town, tells them that Myers has returned, much to Sheriff Meeker’s displeasure. Loomis joins with Meeker, Deputy Logan, Jamie’s foster sister Rachel, Rachel’s ex-boyfriend Brady, and Kelly (Brady’s current girlfriend and Meeker’s daughter), and they all work together to protect Jamie from her uncle, and they set up a makeshift fortress of the Sheriff’s massive house. After many long, uneventful hours of waiting, Loomis leaves the house alone to try to find and stop Michael himself. Shortly afterwards, Michael does appear and attacks the house, killing a majority of the group. When Jamie runs into the streets for help, she is quickly grabbed by Loomis, who tells her that she will be safe with him. He then decides that the two of them should head to the one place he figures Michael will never think to look for them: the schoolhouse. However, shortly after arriving there, Michael does appear and quickly grabs Loomis from behind and throws him out a window. However, he is later seen to have recovered as he witnesses the sheriff, a few members of the town’s lynch mob, and the state police repeatedly shoot Michael, sending him down an abandoned well, which they ignite and blow up, seeming to finally kill him.

At the end, Jamie and Rachel are brought back to their foster parents’, the Carruthers’ house. Loomis arrives with Sheriff Meeker and is finally convinced that “Michael Myers is in Hell, where he belongs.” However, upon hearing a scream coming from the second floor, Loomis races halfway up the stairs before he stops dead in his tracks. He sees the horrific sight of Jamie, still in her clown costume (similar to what Michael wore when he killed his sister as a child) and holding a pair of bloody scissors that she just used to stab her stepmother. Loomis then starts screaming, “No!” over and over again, backing against the wall and raising his gun to shoot her. Sheriff Meeker stops Loomis and disarms him, taking the gun into his own hands before he, Mr. Carruthers, and Rachel also see the horror that Loomis saw. Loomis slowly sinks to the floor, sobbing, and appears to go mad by the thought that the evil that drove Jamie’s uncle has now possessed her.
One year later, Loomis is assigned to Jamie at the Haddonfield Children’s Clinic. Aware that Michael is still alive, and discovering that Jamie is telepathically linked with him, Loomis constantly pressures her to inform him of Michael’s whereabouts, but Jamie is too traumatized to tell him. When Michael returns, the police and Loomis set a trap for Myers at his house, involving the young niece to sit at the dressing table in Judith Myers’s old bedroom. After the police receive calls linking Myers to be somewhere else, they all leave, leaving Loomis to say another famous line, “Now you’ll come, won’t you, Michael?” Michael arrives, and Loomis tries to reason with him, proposing that he fight his rage and redeem himself through a positive relationship with Jamie. Loomis’ words seem to work at first, as Michael calmly listens to him and lowers his knife, but when Loomis reaches to take away Michael’s knife, he slashes him across the abdomen and throws him through the banister in a frenzy. When Loomis awakens, he appears to turn on Jamie, grabbing her and shouting for Michael to take her, only to lure Michael into a trap; Loomis drops a metal link net over Michael, shoots him with a tranquilizer gun, and then violently beats him unconscious with a wooden plank.

Dr. Loomis suffered a stroke immediately after attacking Myers. After that, he retires and moves to a quiet hut on the outskirts of Haddonfield. There he lives a solitary, almost hermit lifestyle, choosing not to interact with other people.

Psychiatrist at the Smith's Grove sanitarium

Michael Myers is PURE EVIL and I must stop him!