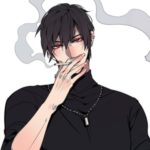 active 3 months, 1 week ago
Base

So, i guess you wanna little story then, right? Some background as to what you can expect from me? Suppose i should start by introducing myself. The name is Alexander A. Eloveira, son of Raziel. Guess there’s a bunch of us running around in the multiverse, right? Well, they can keep their titles and their power. Me? I dont want anything to do with it. Guess thats why i decided to become a bartender. No one ever expects the guy pouring the drinks to be clutching a grenade.

Anyways, im getting ahead of myself. I was born on Helifyno a couple decades back. Not in this timeline, you see, though it was close. Theres so much that’s the same and so much thats different. Dear old dad stuck around for a bit, trying to raise me to be the next best thing since a monket banged two rocks together or something. I didnt buy it. So, when dad left and never came back, leaving me in charge of the place i said fuck it and made my own way. Currently the owner of a multidimensional establishment called “The Dusty Rose”. Nice place, we got drinks and food for all kinds. Jerry even taught me the family secret for supplying wares for free. Not the best business model but if i wanted to be rich i would have become a doctor or something. So thats me. Thats where i am. This new place seems kinda chill. This time line aint so bad. Figure  might bum around here for a bit and see where it gets me. Just mind the coat and mind your manners and i wont have to throw you out, yeah?

Dimensional Stepping: Alex is able to step between the material plane and the sub dimension of his own creation.

Timeline Travel: Alexander can move in between different timelines to reach the desired destination and outcomes or pull different versions of himself in from alternate timelines to assist in whatever he needs.

Gravity Manipulation: The ability to alter, increase, or decrease the pull of gravity.

Limited time control: Alex can rewind or fast forwards his own personal timeline to a maximum of 60 seconds. He can also stop time for everyone other than himself for a maximum of 10.

Demigod Physiology: Due to his divine parentage, Alex is stronger, faster, and more resilient than that of even the most physically fit individuals with the ability to draw upon his divine blood to perform great feats of magic and physical displays.

Destructive Force Manipulation: Alexander can harness the powers of destruction in its purest form and project the energies as need be. This includes, but is not limited too, destructive energy projection, whether control, and seismic disturbances.

Destruction Empowerment: Alex is able to draw power from acts of destruction, whether they be natural or instigated by other forces. The power gained is directly linked to the severity of the destruction caused. The radios of effect is limited at the moment to only regional level.

Spirit Communication: The ability to speak to ghosts and other spirits as if he were talking to a normal tangible being.

Spirit Sight: The ability to see ghosts and other spirits walking around even if they have taken a completely invisible and incorporeal form.

Necromancy: The art of raising and controlling the dead and empowering ones self through spirits of the deceased. Though Master level necromancers are able to completely and totally resurrect the dead, Alex is only able to grant partial resurrection, effectively creating intelligent zombies and other undead.

Deific Form: Alexander is able to shed his human skin for a limited time to allow his divine blood shine through. This form is temporary lasting only a few minutes, however, all of his abilities are increased by a factor of seven. Flight, fire manipulation, and regeneration become active while in this form.