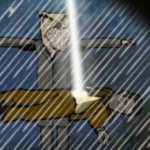 I was born on the planet Scaridial, in the Cosmere, to parents that left that universe soon after I was born, so I grew up on various transports and in massive cities in space. When I turned 18, I joined the Multiverse Defence Initiative and was placed into the elites, now I’m a commander, in charge of three strike groups within the 105th Battalion.

I am tall, with fairly broad shoulders and a heavyset build. I am either wearing power armor or my duster. I have unruly brown hair and bright green eyes.

Steel bracers, Blade of Oblivion, Shardblade named Pureblade that only I can wield. Duel revolvers with unknown properties.
Powers: The ability to store and tap physical speed in the steel bracers, I am also a Compounder, making my ability to tap speed much more powerful. I also have the ability to metabolize steel and push on metal objects, this power is related to tapping speed.

Do you really wanna know. That’s what I thought.

in freedom and justice.