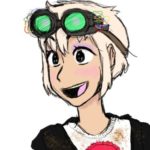 Name: Shultz
Shultz is the the brains of the operations in the East Empire Bounty Hunting Company. A deadly little vixen with an appetite for expensive foods and even more expensive heads to collect. She wears a Blood Gem around her neck, a gem only founded on the red moon far off on the outskirts of the Milky Way Galaxy. She’s the no nonsense type when there’s money on the line, but loves a stiff drink on her time off. She’s known for making friends rather quickly, but business partners even quicker. Her favorite food is Pizza and loves a cold brew with it too! Name: Spade
Spade is the cocky bitch with the itchy trigger finger. She’s not all the smart when it comes to plans, unless the plan is to blow everything up and beat or shoot everyone that stands in her way of doing so. If that’s the plan then she’s all game, if you can get it past her partner of course… Spade’s favorite weapon is a blaster, and if she doesn’t have it on her (for some odd reason) she prefers her makeshift trench mace. She loves long walks and picking teeth out of her chainsaw, not to mention the brain matter from the grill of her speeder. She loves barbecue or any meat, but it must be served rare and with a bottle booze. Name: Erin
Erin is the Hacker of the group team. She’s also full of energy and can’t sit still for more than a few moments. She has a bottomless stomach and still can some how remain skinny as a stick. She loves monkeys, especially the musical jolly chimp! She made her own code name among her hacker community. She does most jobs for credits but on occasion will do them for foods and candy.

There's no honor in jipping the Hangman