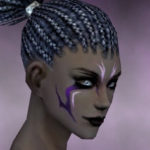 I am an Alchemist, a Traveler, and a Necromancer

Nyarlathotep and My Own Ego

My name is Elexia Harbindale, I was born in the Year 1660 in a small region of what is known as Romania. My twin brother Elexin and I were raised in a noble family but I unlike my soft brother, wanted more than to be in the position our society would have put me in as a woman. I sought out and studied the dark arts, ancient magicks and forbidden ways. Being the Consort to the Demonlord Farzik gave me access to vast realms of possibilities. To maintain my youth I sold my brother’s life to a Ventrue Antitribu known as Ezra. I have traveled many times and dimensions hiding from the monsters I have created… but I feel a change is coming and havoc in the wind… and I want to be part of it.

in what I see.