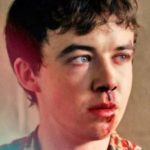 I used to be happy when I was small and didn’t know better. Now, my smiles are rare.

Where to begin? Hmm. Okay, let’s see. I live in an insignificant town in the middle of nowhere called Marfa. It’s in Texas. I was born here, and I’ll probably end up dying here. It’s not as if I have anything important to do in my life. I’m quite boring, really. Most have told me this to my face, and I’m not insulted. How can I be if it’s the truth?

Alright, now you probably want to know more than just me going on and on about how boring I am. Well, my mother wasn’t married when I was born. But, she was kind enough – a heavy dose of sarcasm – to give me the last name of the man who made her pregnant. Thanks, mom! Again, sarcasm.

She sees it as much of a mistake as I do, but she hates to talk about it. Probably because I also mention how my birth was a mistake. See, I hate existing. I absolutely despise it. I feel sorry for her because when I say how mad I am about being alive, she does try her best to change my mind. To cheer her up, I’m always acting like she succeeded. But, it never really helps. It’s hard to live in a tiny town where the man who’s actually my father ignores the hell out of me. I have made up my mind that he also sees me as a mistake, and never wants to have anything to do with me. So be it.
Maybe you can tell by now that I’m sarcastic. I’m also bitter. Once, I went to see my dad at the bar he owns. It’s on the other side of town from where my house is, but it didn’t take long to get there on my bicycle. And yeah, ha ha. Laugh it up because I don’t have a car yet. I can’t help it that my mother’s poor and can’t afford it. And, I can’t find a job at my age. I’m 17, by the way.

So, I go to the bar and I enter the place. My father was in his 50’s when he knocked up my mom, so now he’s like 70 or something. The man’s old enough to be my grandfather. Which is why I never mention him to anyone, especially those who attempt to befriend me. Anyway, I went to the bar and got in. But, he didn’t see me. It’s dark as shit in there except for some oddly placed Christmas lights and other dimly lit lights, so it makes it hard to see. I got away with being inside for a long time before he even noticed me at all. Before he told me to scram, I grabbed a bottle of booze from behind the counter. He’d left the front unsupervised while he went to the bathroom or something, but I got it and hid the bottle inside my backpack. I took it home and got pretty drunk off it. I went to school with a hangover the next day! Makes me a fucking rebel!

Okay, yeah. Maybe not, but I can fake it pretty good. Anyway, my life at home sucks. School sucks. My mom’s a nurse at the hospital in town, and she works nights. So, I am alone a lot. I always feel a lot of pressure to maintain my grades, even though most of the kids in my grade are morons. I could get a C on a test and look like a fucking genius. I’m not even kidding! What hurts me the most is always having so much on my mind, and it makes it hard to concentrate.

I want to go back to the bar and see my dad almost as much as I want to tell him to fuck off and die. It’s mean, I know! But, I can’t help it. I can’t control my thoughts.I want to talk to my mom about it, but she doesn’t ever have the time for me.

Besides my dad, I am struggling with being attracted to some guys at my school. So, I got that going for me. Being BI in Texas, of all places! Holy shit! I made the mistake of confessing my feelings to a guy, and he fucking told others. Guess what happened to me?! Yeah, that’s right. I got my ass handed to me. It wasn’t fun. What was fun was trying to explain it to the principal. And, yeah. Sarcasm. Of course, I lied through my teeth. Or, what was left of them. Now, most people don’t know what to think of me.

As if that’s not bad enough, there was some strange happenings not too long ago. It’s so hard to explain, and you’ll think I’m nuts! Creatures invaded my town. I don’t know where they came from or what they were, but they were vicious. It was one of the few times I got to be around my dad. Mom told me to get out of the house after I called her on my phone. She was at work that day, and some had attempted to break in.

I must have looked like an idiot sitting there on the couch with a knife, assuming that would take care of the problem once one did get inside. She insisted I leave and go somewhere safer. In my panic, all I could think about was the bar. So, off I went on my bike. My dad let me in when I made it there, but he wasn’t very happy to see me. Yeah, big surprise! Not.

I stayed hidden most of the time and offered no help whatsoever. That was mostly because I suck at that sort of shit. Plus, I think my dad knew I’m worthless when it comes to protecting others. He did all the heroics. I’m a coward, plain and simple. More reason for my dad to hate me.  There was a time he did offer me to take his gun, but my hand was shaking too much. He must think I’m pathetic.

That’s about it when it comes to me. I’m a loner, a loser and I’m Bi. My town is small, but is a magnet for the strange and unusual. Creatures with a massive appetite, and if they come around again, I might just get another chance to hang around my father. If they don’t come back, I need to try to hang around him even when things aren’t so bad. It’s a shame we can’t pick our parents. But, I desperately need a father in my life, and he’ll have to do.

I'm a mistake and I shouldn't exist.