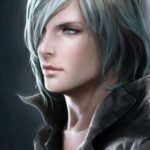 Chapter One
The Fallen
The rain beat down on the cold and dark ground. Puffs of breath can be seen escaping the man’s lips as he hastily made his way towards an ominous tower located in the middle of the town. His hands, falling straight to his side. Large white wings tucked in behind him, with just a hint of crimson on the tip of each feather. He walked with a purpose, and his eyes told that story so well.
As he reached the tower, his hand pushed the door in slowly. The door would open slowly behind the sound of a creaking and old run down structure. He stepped inside, his bright blue eyes scanning the inside for any movement, anything.. It was obviously clear he was looking for something, or someone.

He continued his way in, his fingers tracing across the mantle of the fireplace. Stopping, he looked to gaze at the portrait hung above the mantle. Closing his eyes for a moment, inhaling deeply, then continued on his scavenger hunt. He walked down the long corridor, rubbing his fingers together to rid them of the dust from the mantle.

“May I help you?” , the voice echoed from further down the hall.

“You know why I have come.” responded Eremiel, as his hands reached to his hip.

“You cannot do this alone.” the voice spoke from the shadows.

“I have no choice…” Eremiel snapped back as his hand grasped the hilt of a small dagger, sheathed to his side.

There was a flash of red from the shadows in the form of two eyes, and a terrifying hiss. Eremiel, sprang towards the shadow with the golden dagger gripped firmly in his hand. Eremiel leapt into the air, his wings unfolded behind him. The air helped thrust Eremiel towards the shadows quickly, but when he arrived, the shadows were empty.

“Where have you gone, coward!” He spoke as his eyes looked around once more. The dagger still firmly in his hand. He began to slowly turn in a circle looking around the entire space. As he was turning, he would be forced to the ground by something from above. Feeling his shoulders pinned down, he looked up to see the beast.

Eremiel threw his arm up, and felt his dagger cut into the beast’s side. A loud snarl escaped the lips of Eremiel’s adversary, before the figure would leap back into the shadows. “Only has just begun, and you have already put up more of a fight than the others…” was hissed from the shadows followed by an insane laugh. “However, it is too bad that your fate, too, shall be the same…” Just as the words were spoken, Eremiel felt a sharp pain coursing through his entire body.

The creature came once more from the shadows. In his hands, was a small obsidian medallion. The beast’s finger slowly rubbing the medallion in circles. “You see, Eremiel, you are not worthy of my time. I am Golath, the Beast of the Nine Gates. Your silly Gods cannot protect you in this realm. You are just another puppet angel that has no business with that blade.” Golath stepped closer to the angel as he spoke. His finger still running circles around the medallion. “Your rules have no authority here..”

Golath was right. The tower was a dimensional portal, and Eremiel was in his territory now. Was this how Golath captured the rest of them? Eremiel should have went with them, together to face this monster, but he didn’t. Now his comrades were dead, and it was his fault. Eremiel stood there, cringing in pain, his grip loosing. The golden dagger falling to the cold stone floor beside him.

“You know I will enjoy this.” Golanth hissed once more, exposing his sharp fangs. His lips curling into a sadistic smile as he stopped down, gripping the dagger in his hand. And in no time, Eremiel felt the blade cut into his back. His wing, drifting down, cut from his back. As the wing would touch the ground, it slowly evaporated into a cloud of smoke. Eremiel screamed out in agony, as his other wing was stripped from his back.

“Y…yo… YOU MONSTER!” the angel bellowed out.

“Oh, you flatter me.” Golath responded as the golden dagger was slowly brought up to Eremiel’s neck. Pressing just hard enough to draw a few drops of blood onto the dagger.”Go, join your friends.” Just as Golath was going to bring the blade across the angel’s throat, there was an explosion of light. Stunned, the beast dropped the dagger and Eremiel stumbled back.

He felt his arm in the clutches of something he could not fight off, and was whisked away from this evil and forsaken place, but to where? Where was he being taken?

He stands at 6’5. His figure is that of a well defined athlete. Shoulder length silver hair and icy blue eyes.