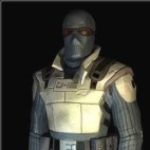 The First Encounter Assault Recon, or F.E.A.R., was formed during 2002 as a covert branch of the United States Army's Special Forces to defend various national security interests against threats of a paranormal or supernatural nature, most notably Psionics. As such, F.E.A.R. and its select few operatives are rarely taken seriously, given the unbelievable nature of what they fight against. Regardless, F.E.A.R. is an elite unit and has the perogative to take military assets from other military branches such as the Air Force and the US Army. They have permission to use deadly force and heavy weapons against perceived threats, such as Replica soldiers, ATC Security Guards and, fittingly, Alma's supernatural enemies. Weapons available to them include assault rifles, combat shotguns, and even rocket-propelled weaponry, as well as experimental energy weapon systems. They also have access to intelligence service systems such as the Hannibal-3 spy satellite.

In dealing with supernatural threats