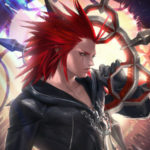 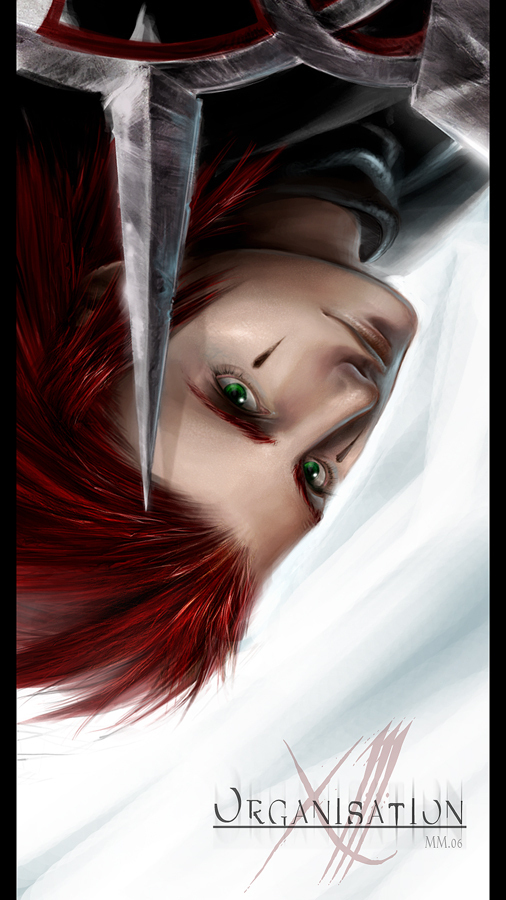 The name's Axel, Got it memorized?!

Axel, the Flurry of Dancing Flames (?????? Odoru Hi no Kaze?), is the Nobody of Lea, and is Rank VIII within the original Organization XIII. He wields fire and enhances his weapons, twin chakrams, with his pyrokinesis to unleash powerful rapid attacks. He controls the Assassin Nobodies.
In Kingdom Hearts Chain of Memories, Axel is the trump card for the rest of the Organization, acting as a double agent in Castle Oblivion to keep track of Marluxia‘s plans. In Kingdom Hearts II, Axel betrays the Organization due to his friendship with Roxas, and acts of his own accord to aid Sora, though he had originally desired to turn Sora into a Heartless and restore Roxas. Axel appears in Kingdom Hearts 358/2 Days as a playable character in Mission Mode and serves as the game’s tritagonist.
Axel’s human form, Lea, had been friends with Saïx’s original persona, Isa.
At the beginning of Kingdom Hearts Chain of Memories, Axel has a mysterious, stoic, and calm, as well as cold, unforgiving, and merciless demeanor on par with that of Marluxia. In Kingdom Hearts Re:Chain of Memories, he interrupts Vexen’s cries for mercy with a cocky “goodbye” before incinerating him without any hesitation, and seems to be amused by the deaths of his comrades as shown in the scene where he is making bets with Zexion. When Marluxia uses Naminé as a human shield against him, Axel confidently declares he would eliminate Naminé to get to Marluxia.
He seems quite distant at times during his time in Castle Oblivion, ignoring Vexen’s insults and almost completely unfazed by Larxene’s flirtatious behavior towards him. Although Axel seems to hold Larxene and Zexion in good company to an extent by making friendly conversation with Larxene while Marluxia is not around and making bets with Zexion as to which member will be defeated next, this was shown to be nothing more than an act to earn their trust. Eventually, Axel betrays Larxene by letting Naminé escape, although he seems disappointed yet satisfied upon her elimination. Later on, he encourages Riku Replica to annihilate Zexion to ensure that his actions in Castle Oblivion go unnoticed by the rest of the Organization, and to help Saïx keep his rank in the Organization. In Kingdom Hearts II Final Mix, he appears indifferent to angering Xaldin, showing his disdain for the other Nobody.
Axel’s cold personality changes drastically, due to his friendship with Roxas, stating that the latter made him feel “like he had a heart”. In Kingdom Hearts 358/2 Days, he has a very laid-back, “go with the flow” outlook on many things, including missions and battles. He is also shown to be quite sarcastic. This is shown once he has returned from Castle Oblivion, when Saïx asks him why he did not report, he simply responds with “Oh, good to see you, too. You’re welcome, thanks for the kind words.”
Axel revealed to have a very kind, heartful side, which he only displayed to his closest friends, Roxas and Xion, acting like an older brother towards them and being their main source of advice and wisdom. In some cases, he got them out of trouble, including helping out Xion and Roxas when Xion cannot summon her Keyblade and preventing them from destroying one another when they are tricked by the Organization into fighting each other. In Kingdom Hearts II Final Mix, when Axel bids his final farewell to Roxas, it can be seen upon closer inspection that the teardrop at the end of the scene belongs to Axel, which displays his emotional capacities.
Originally, when Axel displays emotion, he finds it unusual given that Nobodies cannot feel anything and often refuses to acknowledge them, even mocking his ability to feel towards his death. He notes this in Kingdom Hearts Re:Chain of Memories when he begins laughing, but catches himself and stops. However, it has been hinted by Xemnas, and Axel himself, that by being close in contact with Sora’s heart, Axel began to feel emotions of his own.
Out of the whole Organization, Axel is probably the most difficult to read. According to Lexaeus, no one ever knows what he is thinking or whose side he is really on. While he seems to just be joking around, he may have done more thinking than everyone else combined, as stated in Jiminy’s Journal. Similarly, in both Kingdom Hearts Chain of Memories and Kingdom Hearts 358/2 Days, Axel tends to avoid eye contact when lying.
In Kingdom Hearts 358/2 Days, it is shown that Axel does not like to talk about his past. Whenever Roxas or Xion ask him about it, he gives a brief or vague answer and then tries to change the subject. It is implied that he had some sort of experience with women in his earlier life, seen when he gives Roxas a friendly advice to “not push the wrong buttons” with women. He also believes that women are complicated, claiming that real women are “double dose of complex” (since he thinks that real people are more complex compared to Nobodies), and Nobody women are “single dose”.
Axel’s trademark quote is “Got it memorized?” whenever he refers to an important name, but mostly when he is introducing himself, even when he was Lea. The quote was originally “Commit it to memory” in Kingdom Hearts Chain of Memories, but since Kingdom Hearts II, it was retconned to “Got it memorized?”, and used in Kingdom Hearts Re:Chain of Memories. On a side note, Axel is the only character in the series to curse, since he uses the word “hell” after letting Naminé go, asking Sora to “give [him] one hell of a show”, but in the remake, it is changed to “Try and make it enjoyable”. 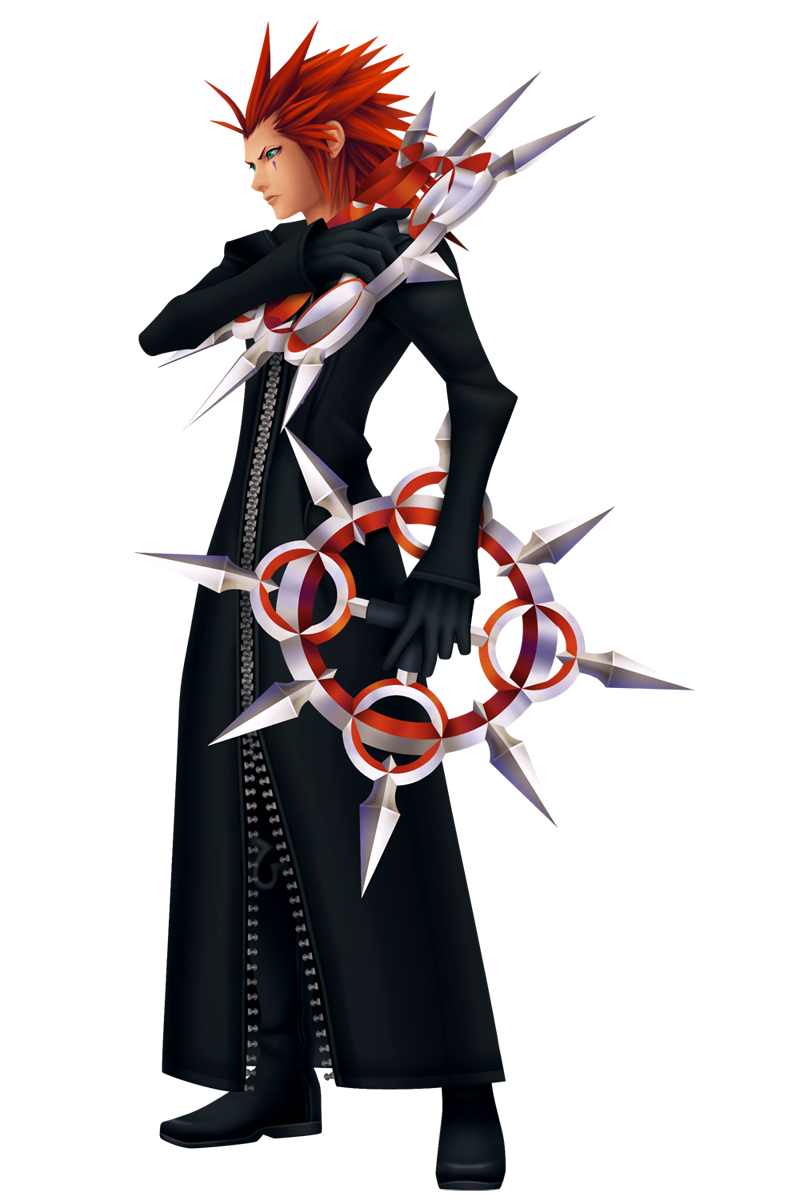 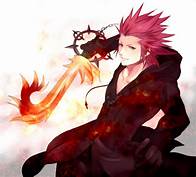 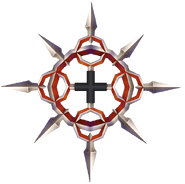 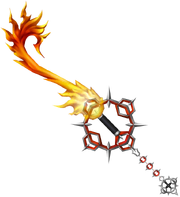 As the Flurry of Dancing Flames, Axel uses two uniquely shaped weapons called Chakrams, and specializes in Fire manipulation. He can summon pillars of flame at will and strike with rapid combos using his Chakrams. He can also surround his Chakrams in flame and throw them like boomerangs, spinning and looping them to hit opponents multiple times.
In his one on one battle with Roxas in Kingdom Hearts II, Axel also summons a circle of fire to surround them and leaps into the flames to hide, emerging to strike with rapid attacks, and then leaping back to keep his opponents off their guard. Axel is a powerful member of the Organization, as shown by how he does not fear the high-ranked members of the Organization such as Xigbar, Xaldin, Marluxia and Vexen. He proved capable of effortlessly wounding and killing Vexen after he had been injured from his battle with Sora, fighting Marluxia on equal footing, with the latter resorting to use Namine as a hostage rather than continue fighting after they reach a standstill, and even besting Xion when she had absorbed some of Roxas’s power, although the battle left him weakened to the point of collapsing. Despite this, his power still doesn’t match the likes of Xemnas, who is the only one to force him to do things he doesn’t like and Axel acknowledges that Xemnas can easily turn him into a Dusk, causing him to consent to targeting Roxas, Roxas, who soundly defeated him after he gained full power, and Saïx, who Axel is shown to be wary of fighting, backing down immediately when he saw Saïx appear in Hollow Bastion.
In Kingdom Hearts 358/2 Days, Axel has a Limit Break called Explosion. During Explosion, Axel throws his Chakrams at enemies while they’re engulfed in fire, creating a small explosion of fire afterwards. While not being thrown, Axel’s Chakrams spin rapidly, gathering fire. However, they can be thrown at any time, and do not need to charge.
During Axel’s Final Limit, Axel combines his two flaming Chakrams into one enormous flaming Chakram, easily many times larger than the two Chakrams. The explosion after the attack is also much larger.

Weapon
Axel utilizes two Chakrams, named “Eternal Flames“. Each Chakram is circular and red, with silver spikes and circles around the edges, and two black handles shaped in a cross in the middle. Each Chakram has eight spikes, possibly referencing Axel’s rank in the Organization. Axel is very adept in the use of his weapon; he can throw them, use them as shields, or use them as melee weapons. He performs some unique attacks, including juggling them against an opponent, or throwing one across the entire battlefield continuously.
He also uses them in conjunction with his fire abilities, setting the tips or the whole on fire before throwing them. From a scene in Kingdom Hearts Re:Chain of Memories, it is shown that he can set his Chakrams on fire from afar, acting as a remote detonator.
The Bond of Flame Keyblade, obtained from Axel, is similar in appearance to his Chakrams. Axel’s Chakrams are among the few Organization XIII weapons that do not bear the Nobody symbol (the others being Xemnas’s Ethereal Blades, and Roxas and Xion’s Keyblades), but the spikes on the wheel do bear some similarities to the Nobody insignia.
In real life, chakrams are actually small razor-edged throwing disks used by warriors in ancient India. Axel’s Chakrams bear more of a resemblance to Chinese wind-and-fire wheels, wheel-shaped weapons that are used strictly as melee weapons.