We have come into being… 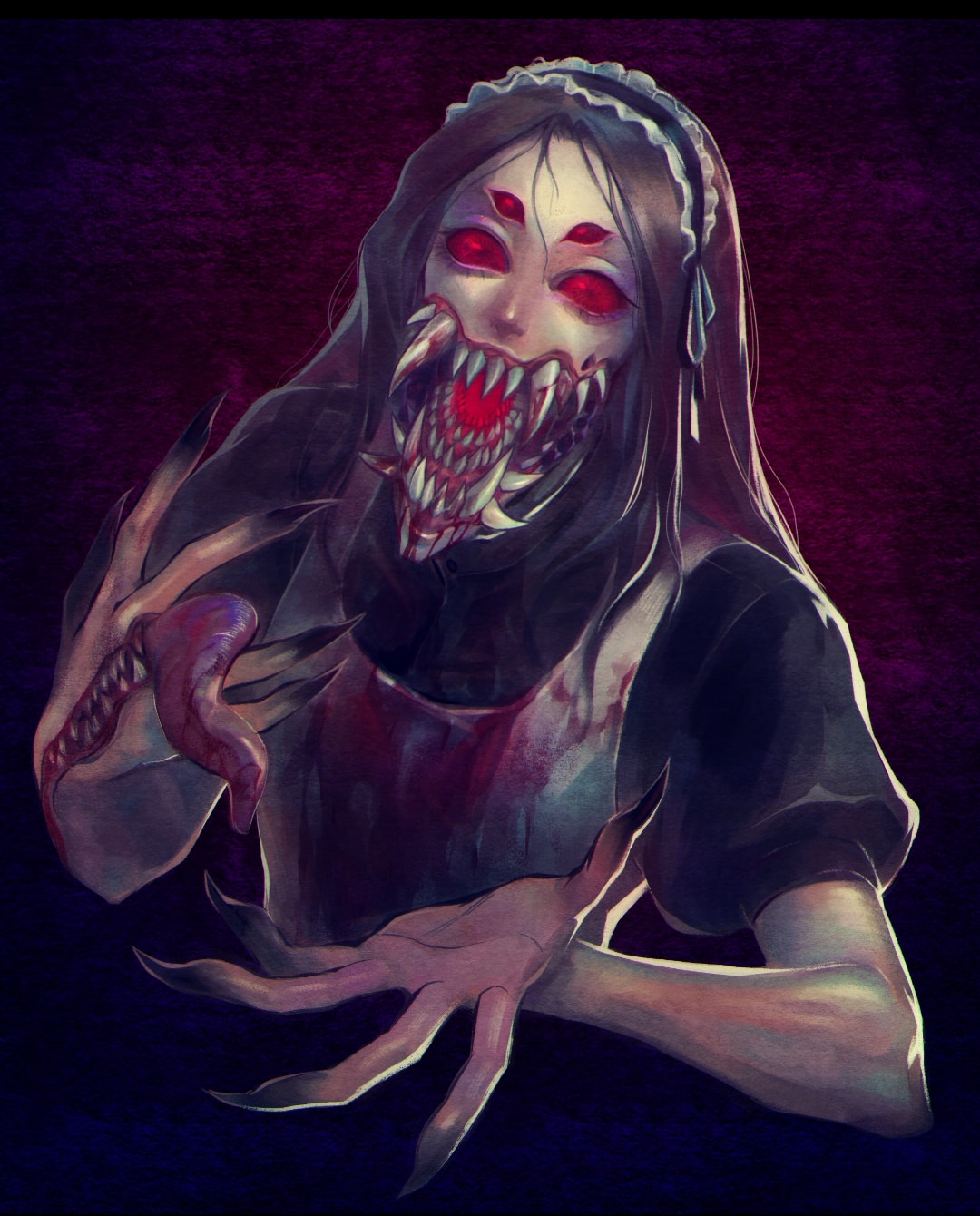 Commissioned art of Fwuf by Curry/@G0966 on Twitter! Thanks, Curry!

Demeanor: Simple, but fiercely loyal to their Mistress. They think of only two things: Helping through their maid service, and eating flesh.

Alignment: Lawful Neutral (they are whatever alignment Magicia is at the time)

Diet: Hyper-Carnivorous. Feeds strictly Flesh. They have a preference for human flesh, carrion, and ham.

Nightmares Made Flesh, and Walkers of Dissonant Worlds

Where they came from is insignificant. What they has become is inconceivable. They lurk beneath the floor, hungering for flesh and bone. They feeds and grows, yet it is never seen. And unfortunately for those above the floor… there appears to be more than one.

Fwufs are a species of creatures best described as a hive mind of Eldritch Horrors. They resemble maid servants in both appearance and demeanor, working under their Mistress (“Mistwess” Magicia). She gave them everything they are, even if accidentally. They will follow her to the end of the world. Wherever their Mistress establishes herself they will put their gore nest beneath her residence, with smaller pocketed hives beneath major establishments to keep tabs on the world around them and easily travel.

They only seek two things… a safe happy Mistress, and flesh to satiate their hunger.

For eons it seems they’ve been away from Hellifyno. But now the maids had returned with a vengeance. Stronger, Faster, Better. This new strain would not be as numerous as the old swarm, but now each maid is a force to be reckoned with.

The maids seem to be nearly immune to pain, and have no sex drive whatsoever. Thus, such threats or promises have no bearing on their actions. Their loyalty to their Mistress is incorruptible. They have a knack for telling the difference between gifts and bribes.

The maids’ other senses are very well honed, as a predatory creature would require. Their sense of smell is incredible, allowing them to smell a carcass from miles away. After spending so much time underground the maids have not only developed a sort of echolocation, but “Dark Vision” that is on par with their normal vision.

When in pursuit of prey, a maid can run at a speed similar to an Olympic sprinter in both bipedal and quadrupedal gates. They can also use their claws to cling to walls and ceilings.

In combat, the maid’s primary weapon is its mouth. The structure of the maid’s teeth and jaws bears similarity to tyrannosaurs, though the multiple rows of quickly replaced teeth also bear resemblance to a Great White. As such, the maids can generate massive amounts of bite-force, enough to shatter bone, crush armor, and even crack through diamond. Due to their nature, the maids are constantly shedding teeth and will never run out during their lifetime.

Due to their Eldritch nature, the maids have an impossible number of teeth. More teeth than there are stars in the sky, than there are atoms in the universe… they form impossible, non-euclidean geometric patterns inside their mouth. Prolonged staring at their teeth can in fact cause psychological damage and damage to the eyes in some cases.

Due to their diet of decayed flesh and their serrated teeth, maid mouths are absolutely filled with bacteria and thus are highly toxic. Untreated bite wounds can go septic within hours, with necrosis sure to follow. Platelets will have trouble forming in such a vile environment, making blood loss much worse than normal and making the prey not only weaker, but easier to track.

When particularly threatened, a maid will often cover its escape by regurgitating their highly caustic stomach acid. This acid is most closely described as a “super-acid”, dissolving bone as easily as a sugar cube in boiling water and even punching through the toughest alloys given enough time. It reacts violently with flesh, breaking organic matter down into a puddle of maid stem cells. It is what allows a maid to completely consume a carcass as large as themselves within minutes.

For non-lethal scraps or simply as a longer reaching weapon, the maids use their claws. Their fingers are tipped in black, raptor-like claws.

Due to their Hive Structure, the maids communicate without speech. Although they can speak in human tongues and often have a voice best described as cute and high pitched, almost a “Fweep” (the sound of a whistle), their primary vocalizations are screams, shrieks, roars, growls, or just the word Fweep.

The maids reproduce asexually. If a maid consumes enough meat, it will vomit a chrysalis that rapidly grows into a fully clothed maid (the outfit is in fact, part of their skin).

Maids will often die violently, and in their death throes they are prone to exploding into a burst of “shrapnel” from their shattered bones and teeth.

Note: While their innocent nature is mostly feigned, they are in fact deathly afraid of all things lewd; so much so that any attempts at sexual advances or even lewd gestures will often be met with gratuitous (and often preposterous) amounts of violence

Their skin is ashen, the palor of bone. Their eyes are a sickening scarlet red, more like incandescent pools of blood than any human organ.  Their hair is a shade of burgundy resembling coagulated blood, stained from generations of bloodshed.

Their figure is androgynous. They appear outwardly feminine but lacking any defining sexual characteristics or indeed reproductive parts of any kind.

The maid diet is hyper-carnivorous, requiring near 100% of their food comes from meat and bone. They are primarily scavengers, but are more than capable of hunting for live prey. To aid in this, maid teeth are huge and serrated. Thick and deep rooted, as well as curving backwards, these teeth are designed for crushing bone, tearing chunks of flesh, and preventing escape. The maids feed by using these teeth to rip off chunks of flesh and bone and swallow them whole, even entire limbs.