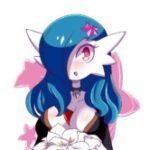 For every choice, there is an echo. With each act, we change the world.

Bears.. and bunnies.. and hounds….any species gender doesn't matter either..

Gardevoir is a humanoid sylph-like, Pokémon. It stands just over six feet tall. The classical tutu-type skirt seen with Kirlia is now a long, flowing white gown that completely covers its legs, giving the appearance that it is floating. Gardevoir have long, slender, white legs underneath their gown. The inside of its gown is green in color. The red horns that were once on Kirlia and Ralts’ head have moved down onto Gardevoir’s chest and back. Most of its face is obscured by its green ‘hair’, with only some white, and its large pink eyes visible. It also has long, slender arms that are green like its hair.

There are no gender differences between a male and female Gardevoir.

Upon Mega Evolution, it turns almost completely white; only its hair remains green. Its gown becomes longer and wider, resembling a bridal gown. The forearms are slightly thicker with a pointed extension above the elbow resembling sleeves. Its facial spikes are larger and now curl upwards. In contrast, its hair is now shorter and more tightly curled. There are now two horns in the center of its chest, extending to either side. These horns are said to be a physical manifestation of this Pokémon’s heart, and it is able to use tremendous psychic power and pure fairy power now that it is open.

The shiny version of Gardevoir has light blue “hair” and arms as opposed to light green, and its “horns” and eyes are orange instead of pink. When a Shiny Gardevoir undergoes Mega Evolution, its dress and sleeves turn black rather than white.

Gardevoirs are famous for their loyalty that they will sacrifice themselves for their trainers’ sake. In the wild, Gardevoir live in groups and they care for their young lovingly.

Gardevoir can have two special abilities, the first being Synchronize, the second being Trace. Synchronize will pass on a Poisoned, Paralyzed, or Burned status effect (but not Sleep or Frozen) to the opponent Pokémon, and it will also increase the chance of meeting a wild Pokémon with the same nature as Gardevoir. The ability Trace will copy the opponent’s ability for the duration of the battle.

Gardevoirs are able to sense the feelings and emotions of Pokémon and people. One of its main abilities, though, is a kind of precognition, which allows it to sense the future. Additionally, it is able to create small black holes, distort dimensions, and support itself without feeling the pull of gravity. Gardevoir are said to protect their trusted Trainers at all costs, even sacrificing their own lives to keep their Trainers safe.

In kindness and love..