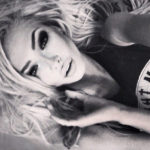 MONSTERS COME IN ALL SHAPES AND SIZES.

Gazelle Kiley, the name rolls off your tongue like oil separating from water and in your mind the rumors of a monster slip into your dreams.

Once a fellow hero of Hellifyno.

Once a common foe of the heroes.

Once damned to the hells, forever in search of revenge.

Gazelle grew up never really knowing her family – an only child with two parents who were never really around – she pretty much had been fending for herself for the majority of her life. At the age of 18 her long term boyfriend had passed away during deployment, never had she felt so alone before. Most of her days after that had been spent alone in her apartment working on expanding the percentage of brain she used. With the two years to follow Gazelle had taught herself small traits that most normal humans couldn’t do, such as telekinesis – which just so happened to be her main source of focus.

One afternoon she had been practicing, attempting to make her bed with just mental capabilities, not an easy task might I add, and something strange happened. Losing consciousness Gazelle awoke to a foreign world. With her mental expansion she had opened up a worm hole to a different dimension – a different planet, one called Hellifyno. She wandered the rough terrain for months before finding acceptable civilization – The Blue Moon Tavern.

Here is where she met her lover Zane, who sadly passed within a month of their interactions; here is where she met Devek, a man who became her lover, tutor, adviser, mentor, and dark administrator. Devek began teaching her the art of energy manipulation and shadow magic – he gave her a taint, the taint of the void – a dark power giving the ability to wipe any object of living entity to a space of nothing.

As months passed Gazelle became one of the chosen six by Lord Scorpio, The chosen six were set on a task, a task to kill the other five – Only one shall live or all will die. Whoever would survive this challenge would be given access to hold full power of the universe – with this challenge came another great and sickening power – the power of oblivion. This gave you the strength to wipe anything or anyone into a state of non-existence, all memory of the object would be erased from every walk of life – after all it never really existed did it? Gazelle was pinned against her two best friends, and her lover Devek.

After a rather unsightly fight with one of the chosen – Laryka – Gazelle was left to be nothing but a walking, living, crispy, burnt corpse, being unable to live with her appearance she caused an induced suicide at the hands of Devek – she was the first to be killed and banished to the hells for her sins.

Gazelle escaped the hells due to a portal being opened by the Slayers – an experiment gone right, Sweet traumatized Gazelle was back on Earth – it wasn’t long before they shipped her back to Hellifyno to collect samples of species for testing and mutation.

Near the end of her mission Gazelle was infused with the spirit of Tegg, a goddess of the ancients, a dark soul that devoured Gazelle whole – or that’s what the people of Hellifyno were lead to believe. Shortly there after Gazelle/Tegg vanished back to Earth to not be heard from again – until now – Gazelle is back – in her fifth physical form.

It is still unknown to this day if Tegg is present in the woman, she does not speak of it and when questioned she answers without answering, the truth is that her and Tegg became so close to being one soul that she can no longer tell if the dark fill of Tegg is with her or not.

Appearance is not everything – at least that’s what they say.

The woman stands at five foot five without heels and is thin, though lean muscle can be seen through the tights of her second skin leather pants and often sheer blouses. High cheek bones and sharply angled brows frame a face of full pink lips and pearly white teeth.

Gazelle has always been proud of the bodies she choses to make her own ensuring they are narrow at the waist full at the bust and bubbled at the ass.

Though her appearance may be intimidating to some her personality it worse. She knows she is attractive, and intelligent, and powerful and has no reason to try and hide such things from the general people of Hellifyno. She likes to laugh and often finds ‘victims’ in the tavern to play her games with, though the skill of manipulation often leads for one to not know until it is too late. If but chance you ever get pass the hard assed resting bitch face exterior you may find that Gazelle, once upon a time, was a good person.

What is she – What does she do?

A question she has a hard time answering “So what are you?” The question itself send the woman in a tidal wave of inner monologue of memories – the memories of her last 3.5 years here on Hellifyno. In the end Gazelle is human, she has only ever been human. Tainted by evil and powers most human will never obtain, gifted by the heavens – perhaps the hells she was a chosen host of the darkest of things, a magnet for sin.

A zombie. A spirit. A possessor. When all is said and done she is human, a human spirit that takes over a chosen body of the dead.

This of course leads to complications, such as a rotting and decaying temple for her soul, this is why you will often find Gazelle sipping on a black fluid to which she calls ‘spirit whiskey’, this is her source of energy, her food, her life, what slows the process of a dying body. She has lived in five bodies in the last 3 years, each time she switches she seems to vanish for months at a time, resetting muscle memory, relearning how to form words, born again.

The ‘talents’ of Gazelle are sewn to her soul carried with her temple after rotting temple and the ‘talents’ of Gazelle are pretty extensive. Telekinesis, Shadow Manipulation, Telepathy, The Void, and a spell or two she learnt from a certain witchy friend. From her wrist hangs a black diamond jewelled bracelet, it is tied to her spiritual energy, with a single twitch of said energy the bracelet expands, unfolds long black sheets to coat the un-dead body. The sheets are perfectly formed to the bends and curves of this delectable body. This is not armour meant to protect against bullets, damage of such is still dealt – although muted slightly- this is an armour to protect against beings and attacks of light.

With being nothing more than a spirit it is near impossible to kill Gazelle – damaging her host will not effect her energy source or life essence but being a dead body her host cannot be healed. This means if you rip Gazelle’s arm off she will be left without an arm unless it is sewn lifelessly from her body. When the temple is no longer functional she returns to the slayers for a transfer.

During the downward progression of Gazelle her name spread quickly world wide, known at first to be a humble woman of selflessness, willing to fight for the planet and die for its people. It wasn’t long before she became known as a dark being, one to fear, reckless and power hungry.