When everything I knew was a lie, could I possibly carry on?

Story:   When Gema was a youth, she survived a vampire attack that killed the rest of her family. She was taken in by a generous scholar, who sent her to a prestigious academy, where she developed a mind for science, particularly in biochemistry and biotech. When older, she would join on with the Olde Watch, where she would provide her past and continued research as means to improve methods of combat against magical creatures.

She also worked on several side projects developing coexistence materials, such as an improved synthetic blood source. This work, while not very well supported by the Olde Watch, was allowed under condition that her assigned research remained her top priority. She remained hopeful, but understood that true peace among species would be near impossible.

While her loyalty could have been considered questionable given her values to seek means for a peaceful future with magicals, she remained bound to the Watch and never showed any true signs of ever defecting… until everything she had known was brought into question.

An attack on the Olde Watch revealed that it had been infiltrated and controlled by the Void. A terrified Gema, thankfully not present at the time of the attack, fled the Watch and her life’s work to go into hiding in a bunker – location undisclosed.

In this isolation, she spent over a year questioning everything that she had known about the Watch, and everything she had stood for. There was no word from the world above ground, and she lived off scavenged materials, sending out scrappy prototype mech enhanced organisms to gather resources for her.

With the bunker technically being a remnant of Olde Watch, she spent every day in fear that she would be hunted down for her affiliation. Her heart hardened, yet she remained ever hopeful that a day would come where she could start a new chapter in her life.

One day, one of her scouts brought back a rumor – a gathering of individuals that could perhaps change her fate. Nervous but determined, Gema made her way back out into the world above to seek them…

Personality:    Gema is nicknamed “Honey” because of her sweet but bumbly nature (though it might also be because her last name sounds like “bees”). When deep into her work, she is rather serious and composed. When she’s not focused, however, she can be rather feeble, especially when around an intimidating superior, breaking into stuttering and bashfulness. Still, she is relatively patient with others and will put up with plenty. The war has made her toughen up a bit, however. 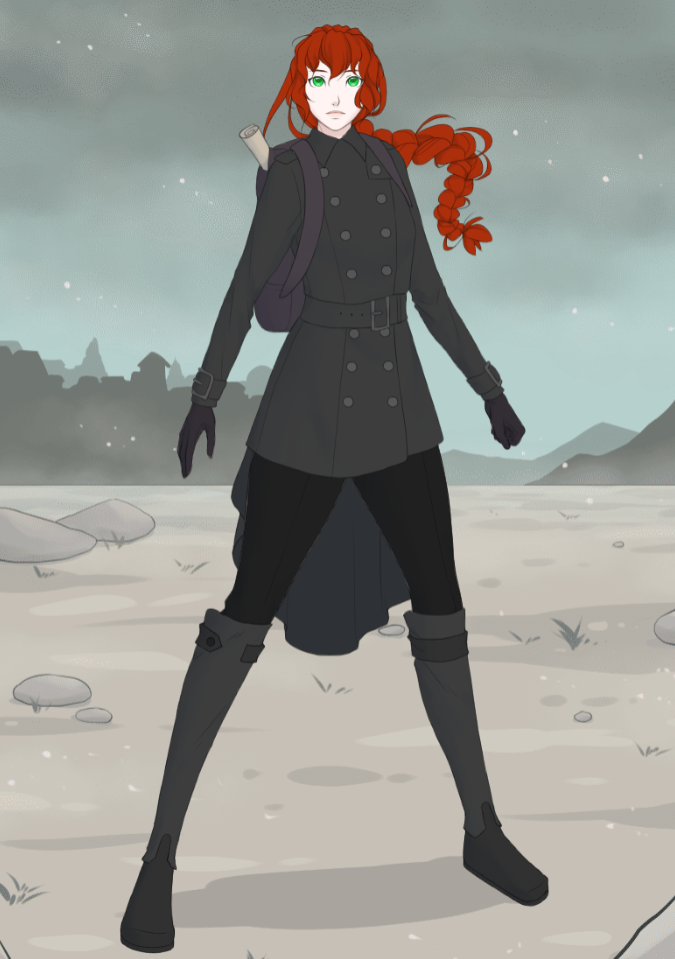 (Pictured: Gema after exiting the bunker)

-Lab coat
-Holopad for note taking, a bit buggy due to the passage of time without proper maintenance or upgrades
-Reading glasses
-Small laser pistol, for defense

I still hope that I can do something right for once.

There has to be a better way…