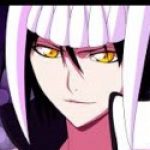 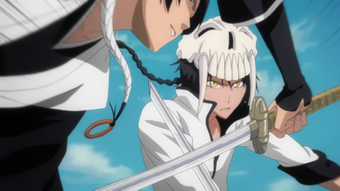 Ggio Vega (??????, Jio Vega) is the 26th Arrancar in S?suke Aizen’s Army and one of Baraggan Louisenbairn’s six Fraccion.
Personality:
He is Calm, loyal, cocky, sarcastic and somewhat arrogant.  He holds his Fraccion master Baraggan in high regard even to the point of referring to him as “His majesty.”  During battle, he taunts his opponents by telling them what they should have done before attacking them viciously. He does not like to be underestimated, and becomes greatly annoyed once he is.
Skills/Abilties:

Cero:
Like many Arrancar, Ggio can fire a magenta-colored Cero from the palm of his hands. It is powerful enough to blast through multiple walls before dissipating.

Expert Hand-to-Hand Combat:
Ggio is highly proficient in hand-to-hand combat, taking on Suì-F?ng, who is herself highly adept. He commonly uses swift kicks when the opponent least expects it.

Expert Swordsman:
Ggio is highly proficient in swordsmanship, taking on the likes of Suì-F?ng while his Zanpakut? is sealed, and being highly adept in the use of three blades while in his released form. His fighting style and technique involves swift and stabbing strikes, constant attacks aimed at catching his opponent using his great speed, and wielding his Zanpakut? with a reverse grip for wide swings and strokes with his attacks.

Sonído Expert:
Ggio is highly adept in the use of Sonído, allowing him to keep up with and occasionally surprise Suì-F?ng. He is skilled at dodging attacks through use of his speed.

High Spiritual Power:
As an Arrancar and one of Baraggan Louisenbairn’s Fraccion, Ggio has a high level of Reiryoku, allowing him to fight evenly with and injure Suì-F?ng.

Enhanced Strength:
Ggio possesses impressive strength, allowing him to kick Suì-F?ng into a building, which was destroyed by the impact.

Note he won’t be that bad towards Non-Soul Reapers and may even be considered kind to Females who once again aren’t a Soul Reaper. Like all other Arrancars he died in the series but I have a backstory for him that I made up to bring him back to life.

Find out for yourself…

Hair: Scruffy black hair with a short braided ponytail in the back

More detailed description:
Ggio wears the white standard Arrancar uniform, but it is customized, partly resembling a mandarin-style jacket with a small opening at his chest area, sleeves rolled up to his elbows, an upturned collar, and hakama, all of which are white. His shoes resemble traditional martial arts training shoes. His hakama are also slightly different from normal: the legs are close-fitting, and lack the creases normal hakama have.

Tigre Estoque (???? (????????), Tigure Sut?ku; Spanish for “Tiger Rapier“, Japanese for “Tiger Fang Swift Wind“): In its sealed state, the hilt of  Tigre Estoque resembles a normal katana, with a light yellow handle and silver, oval-shaped guard with slits going down the middle of both ends. It features an unusual double-edged straight blade which is squared-off, effectively making it the size of a kodachi. 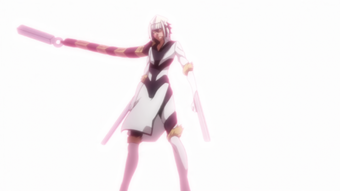 Resurreccion: Its release command is: “Bite Off” (?????, kuichigire). Upon calling out the release command, Ggio’s appearance changes slightly. He becomes more tiger-like, with a much less feminine appearance. He gains red stripes on his cheeks and forehead, and his Hollow mask becomes slightly elongated at the back, with the saber teeth being slightly more pronounced. His white jacket continues down into a black-embroidered white loincloth, with large black stripes running along the sides of the jacket and running the same pattern continuing down onto his legs, which are concealed in a more form-fitting white material which stops at the thigh. His feet become fur-covered and cat-like, and his knees and elbows are covered in a blond fur. He gains long, squared-off blades on each wrist, and his braid becomes very long and thick, hanging down to his knees, striped blond and black with a squared-off blade, similar to the ones on his wrist, hanging off the end.
Resurrección Special Ability: In this form, Ggio’s natural abilities are enhanced. 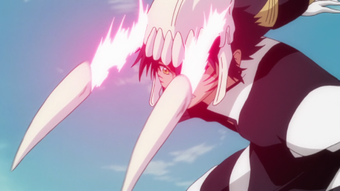 Misil Diente(???(?????????), Mishiru Diente; Spanish for “Missile Tooth“, Japanese for “Twin-Shot Fangs“): Ggio can shoot the teeth of his helmet as projectiles. These teeth are shot with enough force to easily pierce the side of a building. 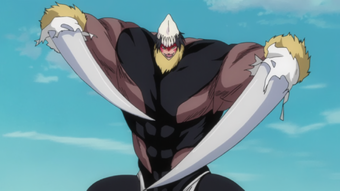 Tigre Estoque EISSable(????·?? (????????·?????), Tigure Sut?ku Eru Saburu; Spanish for “Tiger Rapier The Saber“, Japanese for “Tiger Fang Swift Wind Great Swords“): Lifting his right blade up to the sky as it glows, Ggio calls out the technique name, which transforms him into a larger and more muscular beast. Ggio calls this transformation the “battle form” of Tigre Estoque. In this form, his muscle mass increases greatly, and the white parts of his original form turn brown. He gains a small blond mane around his neck, and his entire forearms and hands are replaced with large blades in the shape of canine teeth. The red stripes on his face become more prominent, and he gains a widows peak running down the bridge of his nose. His braid grows longer, and his veins are pronounced all over his body.