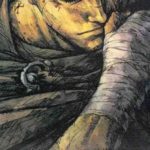 Scar me in a fight and I'll get you a drink

It's easier to swing it 'round with no care for the causalities. Extra baggage is not of much use.

Drawing his first breath on the bloodied ground beneath the hanged corpse of his mother, Guts was taken in by a traveling mercenary group hesitatingly, as such a sight forebode a bad omen, and brought up as a merc during his youth. After years of such strict lifestyle, he knew only the value of taking the life of others to get by and wake up the next day, Guts was eventually forced to flee and once again struggle to survive, only this time by himself with nothing but an oversized sword as baggage.

His adolescent years, Guts spent leading the original Band of the White Hawk, another mercenary group, as a respected raiding captain. There he gained the moniker: 100 man slayer. Guts decides to carve his own path and leaves the White Hawk, training continuously.

Upon returning, he learns the leader of the band Griffith has been imprisoned and tortured for over a year. After rescuing him, Griffith in his yearning to fulfill his ambition and live by the dream he sought out to achieve, summons the God Hand in order to ascend to a higher being. Guts and the entire Band of the White Hawk are sacrificed as fodder for the rebirth of Griffith into Femto, mutilated by hundreds of demons and apostles. All of those carrying the brand of sacrifice are murdered, except for Guts and Caska, who dare struggle against this fate.

Now Guts walks the land of Hellifyno in the Interstice; the place between the astral and corporeal world. Still carrying the brand, Guts is forever haunted by never-ending armies of the dead, mythical creatures and demons, all who dwell in this overlap between worlds, clinging to life even in death, trying to possess the marked body.

Dragonslayer – A 2m slab of raw iron Guts wields as his sword. Originally forged to slay dragons, yet unable to be wielded by any human prior to Guts. Currently used to slay demons and unpleasant folk.

this battle is my own, one of flesh and blood.