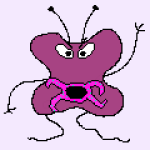 Owner and steward of a very large partial food forest. Moves about looking for new exotic seeds to bring back, further epicing his land, expanding it intelligently,.. with all forms of life and its harmony in the long term in mind. Ferrociously defends the integrity of the future of life for the planet. Discards short term profit frequently in place to enforce the integrity of the future.

Normal brown hair, short or long. Cuts when long usually. In times of particular epicness, spontaneously grows large afro and epic sideburns, speaking in a funky soulful like power demeanor and manner. While in this state, has vast reflexes, and wears sharp shaped black ‘cool’ sunglasses.

Variations of home made ‘cola’ beverage, made from ingrediants around him. If he is able to make it live cultured with the ingrediants at hand, it will be naturally fizzy, as cola should be. With his epic bottle, liquids poured into it come out ice cold.