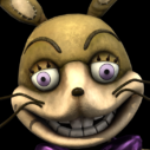 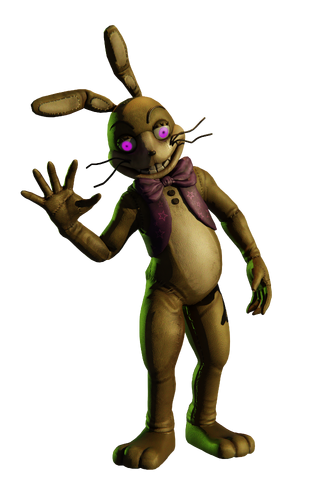 Glitchtrap or referred as The Anomaly is the main antagonist in Five Nights at Freddy’s VR: Help Wanted. He is the virtual form of William Afton that lies within the Fazbear Virtual Experience.

Glitchtrap is mainly golden in color with lighter accents on his ears, paws, torso and snout. On his facial features, he has bright magenta irises, a black metallic nose, two black whiskers on each side of his snout, grinning mouth and sporting rows of teeth attached to each other, with two being large that resembles a rabbit. He has a plum colored bow-tie, a plum colored vest and two metallic buttons on the upper part of his chest. He seems to possess a green outline on his body.

Unlike most of the animatronics, he is having a humanoid shape, which he possesses five fingers instead of the cartoonish four fingers which most animatronics have.

After the first tape is found, Glitchtrap’s first form seem to be ghostly transparent, making amount of solid details not visible , other than having a completely green palette and glowing purple eyes.

Goals: Merge with the player’s consciousness and escape the game 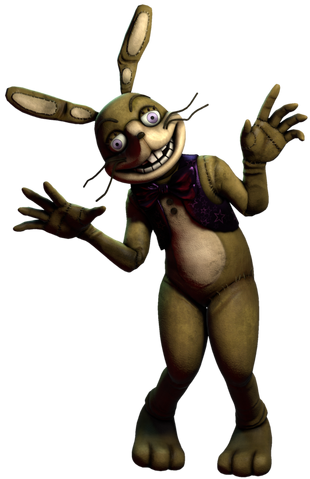 Five Nights at Freddy’s VR: Help Wanted:
Glitchtrap first appears near a doorway in the main hub after collecting one the cassette tapes hidden throughout the game. By finding more tapes, Glitchtrap will get closer to the player and become progressively more solid. The tapes imply that Glitchtrap first entered “Freddy Fazbear’s Virtual Experience” after old animatronic programming was scanned to create advanced AI systems. He began to greatly unnerve beta testers by watching them play, causing one of them to document what they knew about the abnormally in hopes another development team could find a way to eliminate it.

She managed to hide her documented recordings within a protected part of the game’s code; in a place where only beta testers would look. However, Glitchtrap then latched his programming onto the audio files as a way to prevent himself from being deleted. The female tester decided to fragment her recordings and scatter them in the form of tapes to protect the rest of the game from Glitchtrap. In her final recording, the beta tester tells the player of a very risky way to possibly purge Glitchtrap from the game. She reveals that Glitchtrap is capable of possessing the player, and they would need to activate a switch somewhere in front of the stage while their body is being merged with the rabbit.

In the final level “Pizza Party”, the player must navigate through maze using clues presumably left by Glitchtrap. They are lead backstage where Glitchtrap can be seen gesturing the player to follow him behind a curtain. Doing so will leave the player on the main hub’s stage as Freddy Fazbear while the credits roll and Glitchtrap dances in the background.

If the player follows the instructions correctly, they will be locked behind a steel door while Glitchtrap tells them to hush through a slot before disappearing. The player is then sent back to the main hub to find a glitching green Glitchtrap plush next to them.

I will use you to make my escape!