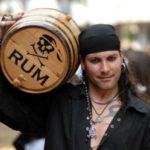 Heave, ho, all together

Never shall we die.

Aye, I have had and lost love… Oh, it's mournful.

Captain aboard the Star’s Guide, and, to boot, I supply me men wit’ the rum they all drink. Now… if only me first mate will understand, I need nearly a whole barrel to meself to deal wit’ this lot!

So… You want to hear me story? It is a sad tale, of woe and loss. A joyful tale, of adventure and love. I suppose I have to thank me looks for the love part, heh. Well, when I was a lad, I lived in the docks. As time went on, technology already there, as well as some wee bit of magic, teleportation was very much there and in use.  Hell, I didn’t learn me magic until I was nearly twenty!  I designed the Star’s Guide after me late Captain to blast a teleportation ring and take us where and when we need to go, but that is of small matter. Well, I was raised on the rigging’s of the ships. Cleaning the decks, the docks, the cargos and even hauling up the cargo ships brought in. When me father passed when I was ten or so, I set off to join a ship, Captain Thranteir took me on, raised me up, taught me everything I know. During me elder years of a teen, I made meself friends with Bragh… Aye, he was a good man. When the captian, he passed on, we wrapped him up and dropped him over, I was made Captain Brams of the Star’s Guide. I already knew how to run the ship, and I had already been running it in the late time of me ol’ Captain Thran… Ah, ’twas a good Captain, I get me looks from him. Well, I like to think so at least, although I know me own father, blasted ass he was. But it is the loss of me well-good friend Bragh that still hurts me to this day, not only was he my first mate upon the Star’s Guide, but he was me own forbidden love, one I couldn’t have. What hurts worst of all, was that I was the one who killed him. Albeit, by accident, but… nonetheless, it still happened, ye’ know? Still hurts mates.  Well, don’t let me bore ye, let’s drink a fine while shall we?

Dark brown, long and tied back under a black scarf.

Some facial hair, cut close to the skin.

A devilish grin, smoldering that melts the heart when he needs something warm to go to bed. Or when he is singing along with his 12 string lute.

A tattoo of two waves meeting across the chest.

A silver chain around the neck.

Black lace up shirt, open from halfway up.

A leather belt, holding a pouch, a cutlass, and a matchlock pistol.

Usually a barrel of rum that he takes with to inns (it’s usually imported from another realm).

A horribly drawn map of the land he is in currently.

Rolled up papers of maps he had graphed while traveling to distant lands.

Oh, aye… they’re called a secret for a reason, mate… But if ye must know; me magic is me secret, and me fateful downfall.

The winds are at me back, and the sky's be clear, a good day to sail.