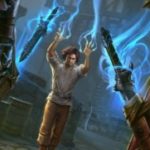 Growing up poor Kaladin did not have an easy life as his parents abandoned him to fend for himself on the streets when he was seven. When he was twelve he began to develop his telekinesis and using them he quickly rose through the ranks of the underground. By age eighteen he led one of the strongest gangs in his city. When he hit twenty five he began to rethink his life not quite happy with how it turned out and began going out in secret pretending in disguise. On one of these trips he met and fell in love with the most beautiful woman he had ever seen. For the next three years he lived two lives as he pretended to be the perfect man with her and even started a family.

It wouldn’t last forever though as his rival found out about his family and had his wife killed and mutilated in front of their daughter. He arrived too late to save his wife but was able to escape with their daughter. Unsure what to do he left her at an orphanage to protect her before taking his revenge and skipping town.

Ever since then he has regretted leaving his daughter behind and wondered what became of her as he searched for any lead he can on her whereabouts.